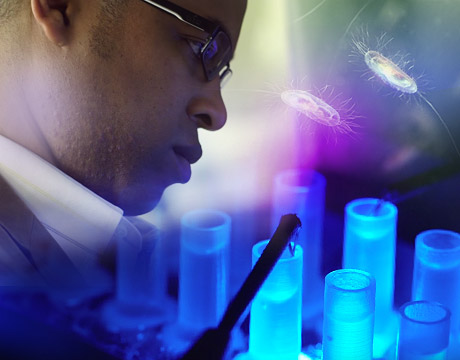 Genetic engineering is a little tricky, especially when it comes to transferring foreign DNA into delicate cells without destroying them. The current approach uses a process called electroporation, which exposes cells to a magnetic field. The magnetic field is adjusted until the ideal field strength is reached: the magnitude at which the pores in the cell membrane open just enough to let in the foreign DNA, and then close back up again without damaging the cell. It can take months, and even years, of painstaking experimentation to find the right field strength.

This time-consuming and frustrating process may soon be dramatically shortened, thanks to a new microfluidic device developed by Cullen Buie, an associate professor of mechanical engineering at the Massachusetts Institute of Technology, and his research team. The device can quickly determine the “sweet spot” in the electric field: the range of electric potentials that will temporarily open up the pores in the cell membrane. So far results have been very promising.

“We’re trying to reduce the amount of experimentation that’s needed,” says Buie. “Our big vision for this device and future iterations is to be able to take a process that usually takes months or years, and complete it in a day or two.”

Buie got the idea for the microfluidic device after discussions with several genetic engineers who were lamenting how electroporation takes so much time. The device consists of a channel created using a soft lithography process. The channel narrows in the middle. When an electric field is applied to the device, the channel’s geometry causes the field to exhibit a range of electric potentials, the highest occurring in the narrowest part of the channel. Cells that flow through the channel are subjected to the same range of electric potentials. A fluorescent marker, which lights up in the presence of the cells’ DNA, is added to the solution. When a cell’s pores are opened by a particular electric field, the markers enter the cell and lights up in response to the cell’s own genetic material. Researchers then mark the location of each fluorescent cell along the channel to identify the value of the electric field that triggers the opening of the membrane pores.

“Using one experiment, you can test a range of electric fields and get some information almost instantly, in terms of whether there’s been something successful in opening pores,” Buie says. “So now, in your searching process, you don’t need to run a bunch of different experiments and test different electric fields separately. You can do it in one go, and it literally lights up.”

In another test, the researchers applied an electric field to bacterial cells in the presence of DNA encoded for antibiotic resistance. The cells were then removed from the device and placed on a separate plate with antibiotics. Results showed that the cells were able to reproduce—proof that the antibiotic-resistant DNA was successfully taken into the cells, without any cellular damage.

“This device allows genetic engineers to measure the minimum electric field that opens pores in an organism, and does so in less than one second,” says Buie.

Sometimes a breakthrough doesn’t have to be complicated.

“Perhaps the most surprising aspect of this work is that nobody had tried it before,” he adds. “The concept for our device is rather straightforward; when we show it to most people in the field, they immediately get the idea and often wonder, ‘Why didn’t I think of that?’”

Prior to this discovery, successful electroporation could take months or years. Now the potential exists to reduce it by at least an order of magnitude. It also boosts the probability of cell survival by identifying the minimum electric field needed to open pores in an organism. “Being able to apply the minimum electric field makes it more likely that a majority of the cells will remain viable,” says Buie.

Roughly one percent of bacteria grown in the lab can be genetically reprogrammed using electroporation. Buie hopes his work will result in making more bacteria available for genetic manipulation for diverse applications including cancer treatment, antibiotics, and bio-based materials.

“We hope our research will have widespread fundamental and applied implications,” he concludes. “On the fundamental side, this work will allow microbiologists to determine how genetics influence microbial physiology. With respect to applications, the research and commercial communities will have a larger number of bacteria available for genetic manipulation. The direct result is that there will be a broader range of technical problems that can be solved using biological engineering.”

Learn about the latest trends in medicine and biology at ASME’s Global Congress onNanoEngineering for Medicine and Biology.

For Further Discussion
This device allows genetic engineers to measure the minimum electric field that opens pores in an organism, and does so in less than one second.Prof. Cullen Buie, Massachusetts Institute of Technology