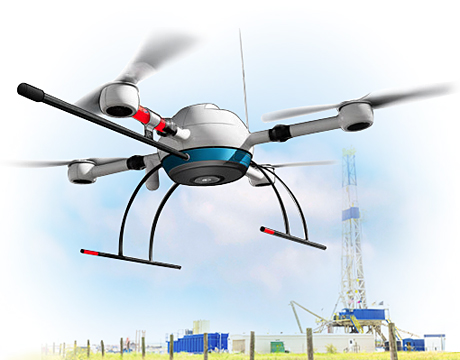 A significant issue with the hydraulic-fracturing process is the release of methane, an abundant gas in oil shale reservoirs that migrates upward through the drill hole to the surface, where it escapes into the atmosphere or is burned off through “flaring.” There are also numerous other locations in the oil and gas production infrastructure where methane can escape, such as loose pipe flanges, inefficient compressors, and outdated equipment.

As the rate of hydraulic fracturing continues to increase across the country, methane release is increasingly recognized as a pollution problem. About 9 percent of all greenhouse gas emissions in the U.S. consist of methane. When released into the atmosphere, methane traps up to 30 times more heat than carbon dioxide, which may accelerate climate change. Flaring by oil and gas companies at drill sites is also a waste of this valuable byproduct, which burns more cleanly than coal.

As a result, there is growing interest in identifying and controlling methane leaks from hydraulic fracturing operations. In 2014, the Obama administration announced plans to reduce methane emissions from several sources, including oil and natural gas production. Also in that year, Colorado became the first state in the U.S. to limit methane emissions from oil and gas operations. Other states, such as California, are in the process of revising their regulations, which could include restrictions or penalties on the release methane and other gases.

Bring in the Drones

With nearly 500,000 hydraulically fractured gas wells across the U.S. and a vast network of connecting pipelines and other infrastructure, reducing methane emissions is a daunting and costly problem to tackle. The key is devising an industry-wide method for surveying, identifying, and correcting methane leaks in drilling and processing operations.

Some organizations, such as TransCanada Corporation (which wants to build the Keystone XL pipeline), utilize helicopters equipped with laser spectroscopic systems that identify methane concentrations in the atmosphere. The central unit emits an infrared laser signal: when the laser beam strikes methane gas, some of the light in the beam is deflected, creating a distinctive signature. The difference between the emitted laser and received laser is directly proportional to the amount of methane encountered. Infrared cameras—in aircraft as well as satellites—have also been effective in identifying methane leaks over large areas.

A faster and more cost-effective approach is the use of “methane-sniffing” drones. Robert Jackson, an environmental scientist at Duke University, has been testing drones as a way to detect the release of methane over hydraulic fracturing operations. A key limitation, he notes, is the weight of the payload. "Carrying a big camera or methane sensor, a drone might be able to stay in the air for 30 minutes," says Jackson. "It’s difficult to screen a shale play with that kind of time."

Researchers are developing more sensitive methane sensors for leak detection that utilize cavity ring-down spectroscopy (CRDS). For example, Colorado State University Ventures has created an advanced CRDS system that can be installed on drones to provide real-time measurement of methane emissions. The sensor can discern between oil-and-gas-related methane emissions and those from biogenic sources, such as cattle.

“A principle advantage of the sensor is its simple design, which allows for a lighter weight and less expensive, less complicated system,” says Jeremy Nelson, director of licensing and business development for Colorado State University Ventures.

These features, he notes, make the sensor suitable for large-scale deployment in both stationary systems and unmanned aerial vehicle and drone applications. The high sampling rate (1 Hertz) allows for applications in high-speed moving vehicles such as UAVs and land-based vehicles so that large areas can be quickly monitored by a single sensor instrument, saving time and reducing survey costs.

For Further Discussion
Researchers are developing sensitive methane sensors based on cavity ring-down spectroscopy that can be installed on drones to provide real-time measurement of methane emissions.