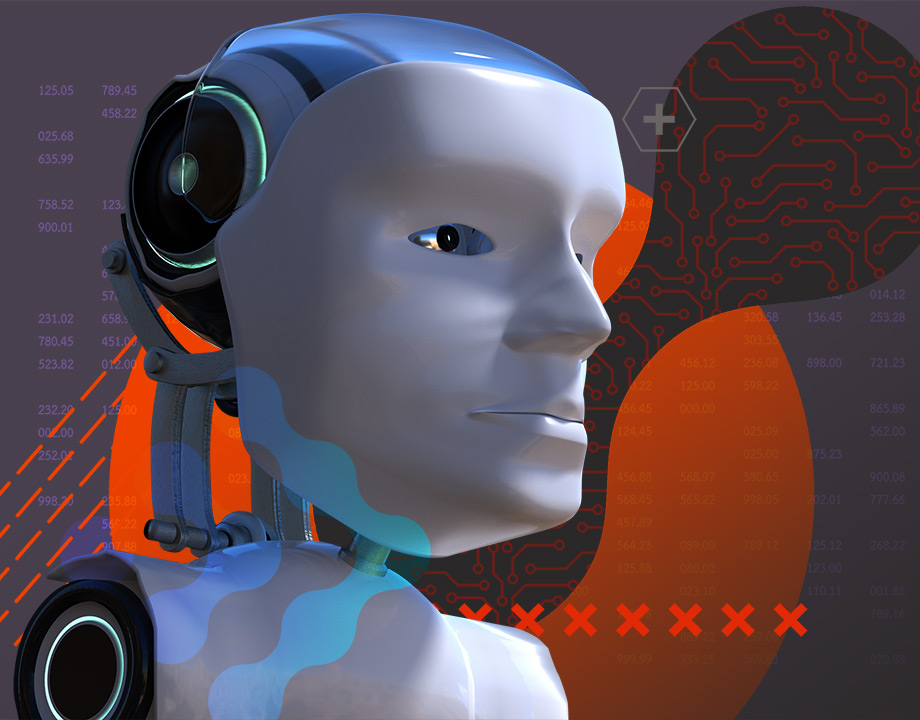 Humanoid robots are designed to look like humans for intuitive collaboration, and the latest locomotion and AI technology is helping to speed up their development.

Robots come in many shapes and sizes. But perhaps the most intriguing, endearing, and acceptable are the ones that most closely resemble humans.

These human-like robots—or humanoids—are used for a variety of purposes, including but not limited to:

Before the coronavirus pandemic and the correlating economic uncertainty, Stratistics Market Research Consulting had expected that the global humanoid robot market would reach $13 billion by 2026. Despite the pandemic, however, robot usage remains on the rise.

As the virus continued to spread, robots became increasingly useful around the world, helping with crucial tasks such as relieving tired nurses in the hospitals, performing basic cleaning and delivery tasks, helping in warehouses, and maintaining production levels for manufacturing companies while their human co-workers were quarantined. 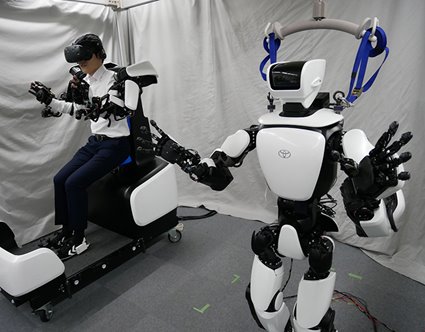 Initially introduced by Toyota in 2017, the T-HR3 is a humanoid robot that mimics the movements of its human operator—like a real-world avatar.

“It is often said that a human shape is useful because the robot can use the same tools and environment as a human, but one more big reason is that humans find it to be easiest to control robots in humanoid form,” explained T-HR3 development team leader Tomohisa Moridaira.

Updated for the Tokyo Olympics, the T-HR3 now has improved controls and a more natural walk. Looking forward, these humanoids will ideally be able to perform surgeries while their operators—human doctors—control them from another part of the world. These humanoids will also allow caregivers to do their work remotely, and for those in need of assistance to live a more independent life. 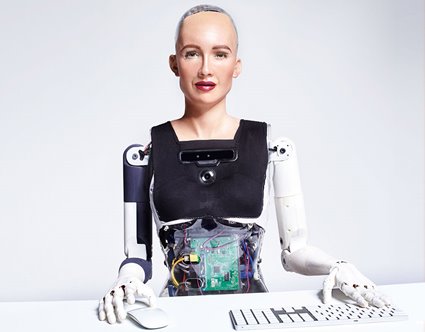 Perhaps the most recognizable face of humanoids is that of Sophia, a social humanoid developed by Hong Kong-based Hanson Robotics. Taught by humans, Sophia can move, talk, show some emotions, draw, and sing.

First activated on February 14, 2016, this AI-powered humanoid robot continues her role as a robotic ambassador, helping to advance research into robotics and human-robot interactions.

Recommended for You: Meet Your Robotic Coworkers 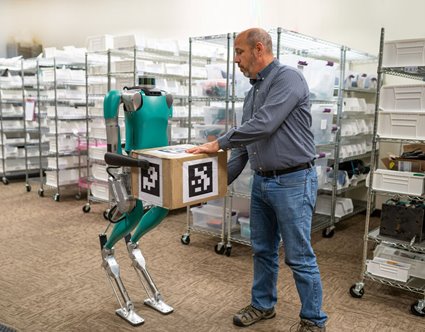 In January 2020, it was announced that Ford became the first customer to incorporate Agility Robotics’ humanoid robot, called Digit, into a factory setting.

This headless humanoid has nimble limbs which can pick up and stack boxes weighing up to 40 pounds, and sensors that allow it to navigate various obstacles such as stairs and varying terrains. It can even balance on one foot—though it usually walks upright— and can also fold itself for compact storage.

Ford envisions that Digit will be able to ride in a driverless car and deliver packages to customers, automating the entire delivery process. 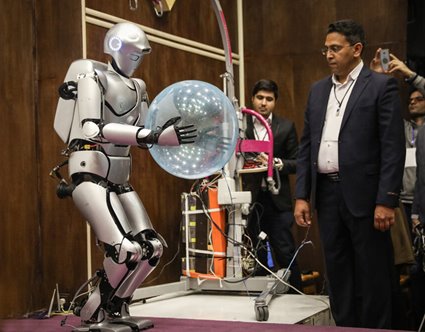 Mechanical engineers at the Iranian University of Tehran have been working on Surena robots since 2010. Their latest model, which debuted in December 2019, is called Surena IV—an adult-sized humanoid that is reportedly capable of face and object detection, speech recognition and generation, walking with a speed of 0.7 kilometers per hour, and an ability to grip a variety of shapes and objects. It has 43 degrees of freedom.

Engineers use Surena to research bipedal locomotion, and AI, and to attract students to careers in engineering. 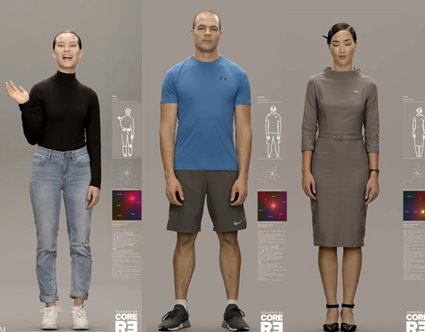 Digital human beings look and act like humans but are entirely virtual.

Take Samsung Technology and Advanced Research (STAR) Labs’ NEON, for example. These AI-powered beings, each unique in personality and appearance, are designed to show emotions, learn from experiences, and have real conversations.

Each NEON is computer-generated and can be customized for a different role, such as a virtual doctor or a yoga instructor. 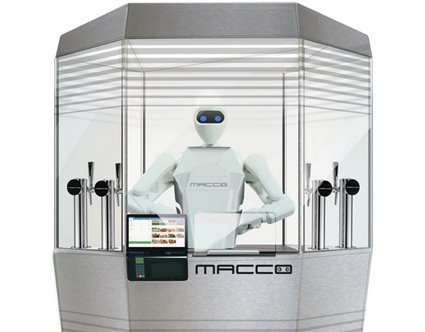 Developed by Macco Robotics in Spain, Kime is a robot designed to serve food and beverages. With its human-like head, torso, and arms, this kiosk-based humanoid has been tested at gas stations in Europe and in a Spanish brewery.

The humanoid features 14 to 20 degrees of freedom, has smart sensors, and uses machine learning to improve its skills—some of which include pouring and serving up to 300 glasses of beer per hour.

You May Also Like: These Aren’t the Droids You’re Looking For 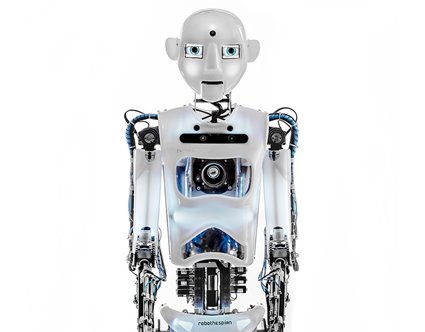 Founded by director Will Jackson in 2004, Engineered Arts is a U.K.-based company that produces entertainment humanoids through collaboration between artists, mechanical and computer engineers, and animators.

Engineered Arts’ first humanoid—the well-known RoboThespian—is a robotic actor that comes with a library of impressions, greetings, songs, gestures, and movements staged through a hidden system of tracks and dollies.

Several of these can be added together to become a robotic theater—an integrated system of robots, movement tracks, animation software, touchscreen control, lighting, sound, and external device control. 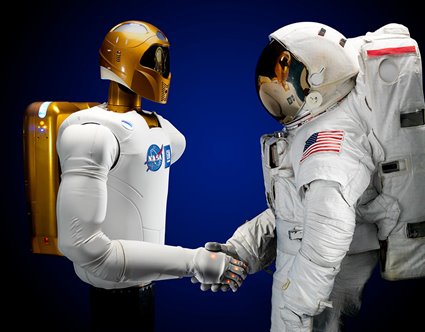 Several countries have been working on humanoids for space exploration.

India’s Vyommitra, for example—a female humanoid robot—was designed to launch on an uncrewed spaceflight in December 2020 (which has since been delayed). The robot is scheduled to conduct microgravity experiments to help prepare for future crewed missions.

Russia’s Fedor, or Final Experimental Demonstration Object Research, was a remote-controlled humanoid that flew to the International Space Station (ISS) in 2019, where it simulated repairs during a spacewalk and later returned back to Earth.

NASA’s Johnson Space Center has also worked on several humanoids, including Robonaut 2—which spent seven years aboard the ISS—and Valkyrie—an advanced humanoid designed to operate in harsh conditions such as the Moon or Mars. 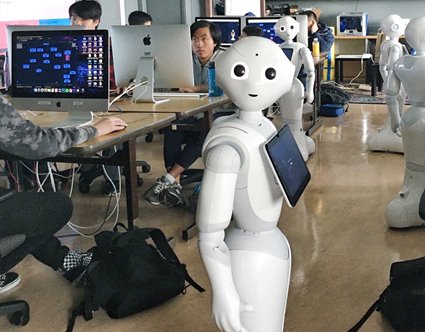 SoftBank Robotics’ social humanoid, Pepper, was designed to be a friendly, emotions-reading helper for jobs such as receptionist, retail worker, or nanny.

Now, Pepper comes with an educational integrated development environment (IDE) called Tethys, which was created to teach students how to code. Using the software, students can program the humanoid to move, talk, use gestures, and show on-screen messages, all in real-time.

SoftBank Robotics hopes this initiative will inspire a future generation of engineers and roboticists. 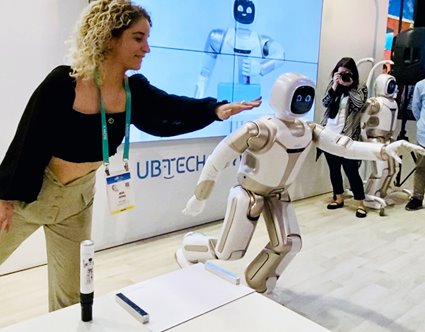 Most humanoids are intrinsically human collaborators.

Kawada Robotics’ NEXTAGE, for instance, is a humanoid research platform for industrial collaborative robots, or cobots, for Industry 4.0.

UBtech Robotics’ Walker, on the other hand, is designed to collaborate with humans in their homes. With seven degrees-of-freedom manipulators, this humanoid was developed to perform household tasks and smart home control.