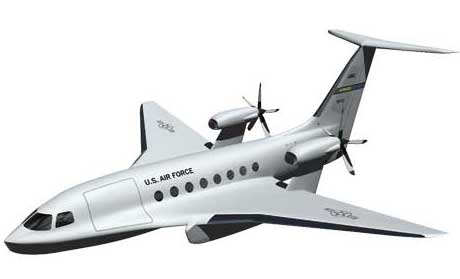 Shown here is a rendering of a nanotube-enhanced amphibious aircraft designed by Harbor Composites.

More payload. Lighter components. Stronger parts. Lower cost. Carbon nanotubes have long promised these and other highly desired properties. In spite of their well-known strength and stiffness, however, nanotubes have proven to be difficult to harness in manufacturing composite materials—combinations of very strong, stiff, reinforcing carbon fibers in an epoxy resin that acts like glue to hold them in place.

But in recent years, mechanical engineers have been figuring out ways to incorporate nanotubes into resins, to increase the strength and durability of composite materials without forcing companies to reinvent their production processes. As a result, nanotubes are now progressing beyond such niche markets as high-performance sports equipment and into the bodies of boats, cars, and planes.

The carbon bonds, which link so tightly with one another to form nanotubes, also make the nanotubes inert. They do not dissolve in water, oils, or solvents. As a result, there is no way to disperse raw nanotubes in resins. Indeed, adding raw nanotubes to a resin can actually degrade a composite's properties. Like strands of half-cooked spaghetti in water that is not stirred enough, undispersed nanotubes tangle up and form clumps. In resins, those clumps become places where stresses concentrate and initiate cracks—similar to what happens when a hammer strikes concrete and cracks form around the largest aggregates.

Researchers have found ways to “compatibilize” nanotubes by attaching certain molecules to the nanotube surface; the part of the molecule farthest from the nanotube contains a chemical group that disperses in the resin. As the resin flows, those molecules carry the lassoed nanotubes with them.

Moreover, nanotubes’ long, thin shape and high surface area also make them jam up when the resin flows, like logs jamming in a flowing river. Adding barely 1 percent nanotubes by weight can transform epoxy having the viscosity of light motor oil into the consistency of peanut butter. Yet that is enough to make stronger and more durable composite materials. The resin is the vulnerable component of the composite—the part that is brittle and susceptible to cracking. Strong nanotubes help the resin transfer loads to the reinforcing fibers more efficiently. They also act like tiny dams to keep cracks from spreading. Nanotubes improve resistance to impact, fatigue, and microcracking, all properties related to the resins. Nanotubes added to a resin boosts composite flexural strength and modulus by 30 to 50 percent and tensile properties by 20 to 30 percent.

Some formulators compatibilize nanotubes for infusion processes, which pump resin into reinforcing fiber preforms. For the most part, though, large parts are made from prepreg, thin layers of woven reinforcing fibers pre-impregnated with nanotube-containing epoxy. Because the layers are so thin, the nanotubes do not have to flow through large volumes of space. The layers are partly cured to solidify the resin. Workers lay tacky layers of prepreg on one another to build up a part, then put it under a vacuum, and heat it to cure the resin and form a solid component.

Unlike most advanced materials, nanotubes provide advanced performance at lower cost. Standard modulus carbon fibers cost about $10 to $12 per pound; intermediate modulus fibers cost about five times higher: $60 per pound. Adding just 1 percent nanotubes to the resin gives a standard composite the properties of a part made from prepreg made with intermediate modulus fibers—but costs 10 to 15 percent less.

The Proof Is in the Product

In late October 2010, a prototype experimental unmanned surface vehicle—the naval equivalent of the unmanned aerial vehicles flown by the military in Afghanistan and elsewhere—began its first tests in Puget Sound, Washington. The 54-foot boat, called the Piranha, weighs only 9,000 pounds including engine, transmission, and deck—yet can carry up to 15,000 pounds of fuel, surveillance equipment, and weapons. The secret? Less than 0.5 percent (by weight) of nanotubes in the prepreg for its hull—which is the largest nanotube-reinforced structure ever built. Its builder, Three Points Composites just south Seattle, designed the Piranha to cruise more than 2,000 nautical miles at a clip of 25 knots and stay at sea for days without refueling, performance that could make it suitable for protecting ships against piracy.

Nanotubes may improve the safety of lightweight cars. In the high-performance electric Supercar and its plug-in hybrid Solo by the Los Angeles designer Velozzi, fully 80 percent of their structure will be carbon composites, including the chassis and body panels. Standard composites are brittle, however, splintering and shooting out fragments in a collision. Velozzi is incorporating nanotubes to make the cars both lighter and safer. Nanotubes allow the use of 30 percent less carbon fiber, making for a part that not only weighs less but also is less brittle, so it fails in a less catastrophic way, like tempered glass.

And both Boeing and Lockheed Martin are exploring was of incorporating nanotubes into established production methods to improve performance of aircraft. Unmanned drones are a likely early aerospace application—adding nanotubes to make the wings stiffer, to maintain the aircraft's efficiency even when carrying heavy payload.