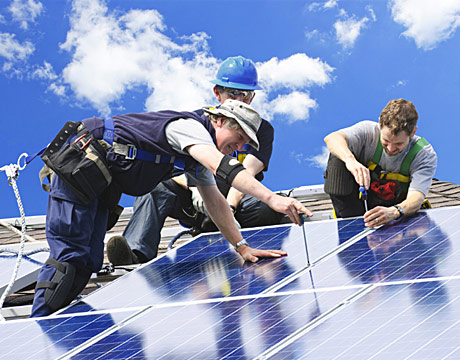 But the latest technological explosion, that “Internet of Things,” has an extraordinary reach when it comes to minimizing the things we have to do. Soon we’ll never dirty our hands on a light switch, wrinkle our noses over a jug of milk that’s gone bad, or decide for ourselves whether or not to turn on the AC.

It’s not just the Internet, or the sensors, that are letting objects tell each other what to do so we don’t have to. The crucial link is the middleman between them. Companies like Synapse create those middlemen. “We started out consulting, building a wireless system for someone,” saysJonathan Heath, the company’s product manager. “We said ‘That was really hard, what if we could do this and make it easier?’ That’s how SNAP came about.”

SNAP is platform that has given airlines new, speedier, lightning warning systems; automotive factories sophisticated LED lighting controls; and even allowed dairy farmers to know when their cows are in heat by sensing their gait in the pasture. Some of these customers buy what they need from Synapse, slap the modules into their design, and are more or less done.

Others need a little more help.

Shoals Technologies Group, for instance, a ‘balance of systems’ provider for solar energy (that is, they deal in all the parts of solar that are not the actual photovoltaic cells), improved the connectivity of their product immeasurably by partnering with Synapse. “They had a problem they were looking to solve,” says Craig Goodwin, the company’s Senior Product Marketing Manager. “They had a combiner box business but wanted to add string monitoring capabilities.” Though they could have bought radios to go wireless, they didn’t have a sensor array to monitor voltage, current, and temperature.

Communicating sensors would give them greater visibility, an ability to optimize performance, and more efficiently troubleshoot problems. “We built a platform that can aggregate the data and an analytical tool,” says Goodwin. Technicians can now diagnose problems such as shading problems, panel cracks, strings that have gone out, and even dirty panels, earlier and from afar.

Getting to that stage involved a few tricks. “Large panels at an angle, with the combiner boxes underneath. It’s a bit of a funky RF environment,” says Heath. To overcome that hitch, they abandoned the typical routed signal path and went with a multicast system, where devices not necessarily in the path could receive and rebroadcast messages. “It’s counterintuitive,” says Heath. “The beautiful routing algorithm will route and if it fails it will reroute. Well, the timing that it took to do that wasn’t the most efficient. Sending out a multicast gave redundancy and was beneficial.”

Synapse has similarly helped the explosion of the IoT extend to explosions. Where with Shoals they increased the efficiency of turning light to energy, with COBRA they’ve helped turned energy to light—exploding light. COBRA is a pyrotechnics company who wanted to cut out the massive time and expense it takes to wire shows. They turned to SNAP to help them make a fully wireless system.

“At big pyrotechnics shows they’ll do 1,200 to 1,600 ‘cues’ they call them,” says Heath. The way SNAP allows them to communicate means they can overlay commands into one big message, with no minimum fire time between cues. “They can synchronize so that, once they start communicating, all the devices now know ‘This ismy time zero.’ It gets really coordinated,” says Heath.

When the pieces of any system can talk to and monitor themselves and each other, coordination goes up, efficiency goes up, and maintenance goes down. With the right devices speaking the right language, people, and businesses, can further cut down that pesky “doing stuff.”

As Heath puts it, companies like Synapse “enable folks that are doing other things to do what they do best. Letus focus on the network and they can focus on their application.”

For Further Discussion
We said ‘That was really hard, what if we could do this and make it easier?’ That’s how SNAP came about.Jonathan Heath, product manager, SNAP