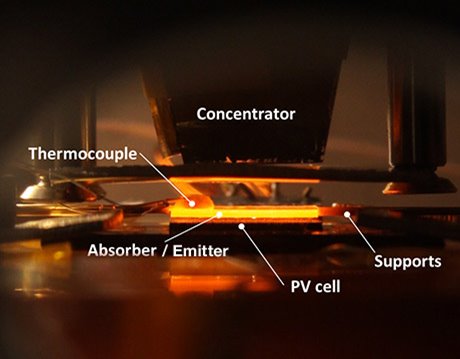 A team of researchers at Massachusetts Institute of Technology has come up with a new way to capture solar energy that makes it easier to store and be used on demand at a later time.

The team created a device that improves the efficiency of solar panels by using wavelengths of light that normally are wasted because they cannot be captured by conventional photovoltaic cells. In this new system, the sun heats a high-temperature material, a two-layer absorber-emitter device placed over the PV cells. The outer sunlight-facing layer, the absorber, includes an array of multi-walled carbon nanotubes that efficiently absorbs the light’s energy and turns it into heat. A bonded layer of silicon/silicon dioxide photonic crystals, the emitter, is engineered to convert the heat back into light that can then be captured by the PV cells. This allows much more of the energy in the sunlight to be turned into electricity.

This new system combines the advantages of solar photovoltaic systems, which turn sunlight directly into electricity, and solar thermal systems, beneficial for delayed use because heat is more easily stored than electricity. The basic concept has been explored for several years, according to the team.

A lot of work has been done on the theoretical design of surfaces for solar thermophotovoltaic systems (STPVs) and fabrication of single components for potential integration in these systems, says team member Andrej Lenert, an MIT graduate student who expects to be awarded his PhD in mechanical engineering this spring.

Lenert has been involved with STPV efforts at MIT ever since the university opened the Solid-State Solar Thermal Energy Conversion (S3TEC) Center in 2010, but his interest goes back even further to a radiation class. “I was drawn to this work initially because of the elegance of the concept and later because of the multi-disciplinary nature of its practical implementation,” he says. “My interest in renewable power generation stems as far back as my interest in pursuing an engineering degree.” He expects to continue research in this area after graduation.

While the earlier studies have suggested efficiencies as high as 40%, experiments remained below 1%, Lenert says. “The large discrepancy is in part due to the challenging experimental nature of spectral engineering at high temperatures. It is also in part due to fact that the overall system efficiency is highly dependent on the performance of each one of the energy conversion steps and components, just like in a conventional solar cell, except with the added spectral conversion steps in the hot absorber-emitter.”

He says the team came up with the idea for the absorber-emitter after developing a framework to identify which parts of the spectrum are most critical to the success of an STPV system. “We then tuned the spectral properties of the absorber-emitter using carbon nanotubes and silicon/silicon dioxide photonic crystals to target these properties and achieve the improved performance,” he says.

Key to the breakthrough was an understanding of the interplay between the use of structure at small scales to tune spectral properties and macroscale device design.

Lenert’s team has produced an initial test device with a measured efficiency of 3.2%, and they say with further work they expect to be able to reach 20% efficiency, enough for a commercially viable product.

In their experiments using simulated sunlight, the researchers found peak efficiency came when the intensity was equivalent to a focusing system that concentrates sunlight by a factor of 750. This level of concentration is already much lower than in previous attempts at STPV systems, which concentrated sunlight by a factor of several thousand. But the MIT researchers say that after further optimization, it should be possible to get the same kind of enhancement at even lower sunlight concentrations, making the systems easier to operate.

Lenert says this is because the research center is currently working on getting even better control of the thermally-driven spectral conversion process using wavelength and angular selective surfaces. “This selectivity will lower the required level of solar concentration in two ways: Control over re-emission losses from the absorber and a more efficient TPV process that will contribute to lowering the input solar power needed to reach the same operating temperature.”

If the team achieves its goal of generating power from sunlight both efficiently and on demand from an STPV system, it could have a major impact on the way society uses solar power or at least provide another renewable option for applications when solar thermal plants or photovoltaics cannot meet the requirements, Lenert says.

For Further Discussion
The large discrepancy is in part due to the challenging experimental nature of spectral engineering at high temperatures.Andrej Lenert, MIT graduate student