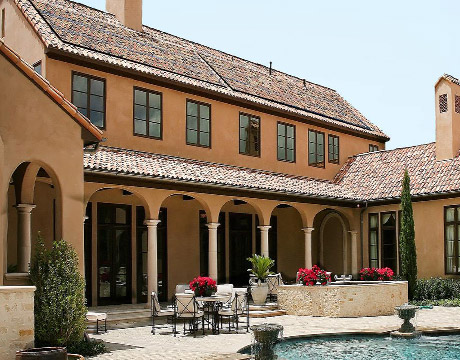 Solar panels are now being manufactured to mimic home facades and other materials. Image: Sistine Solar

Solar panels traditionally have been manufactured to be functional, not aesthetically pleasing to the eye. This may be one reason why less than one percent of U.S. households have adopted solar panels.

Recently, there has been some improvement in making solar systems more attractive. For example, some companies now sell “frameless” designs that appear to “float” on the roof surface, without the visible metal frameworks underneath. However, even this isn’t good enough for innovative companies like Sistine Solar, Tesla, and Dyaqua, which are developing solar rooftop systems that blend into the roofing color and structure.

The ultimate goal of these systems is to entice more homeowners to install photovoltaic systems.

“We passionately believe that by designing beautiful products that generate electricity more elegantly, we can capture the hearts and minds of the world, driving the mass adoption of clean energy,” says Sistine Solar on its website. “By freeing solar from its traditional form, we envision a world where solar is everywhere, on every surface of every building, ushering in the era of 100 percent clean energy.”

Blending into the Surroundings

Sistine Solar, a Boston-based, Massachusetts Institute of Technology start-up, has developed a “solar skin” layer that allowssolar panels to match the appearanceof a roof,without reducing efficiency or production. The layer utilizes selective light filtration to display an image while still transmitting light to the underlying solar cells, using advances in color science and human visual perception.

“The concept is similar to the advertising wraps commonly seen on bus windows,” says Sistine Solar co-founder Ido Salama. “The wraps reflect somelightto display an image, while allowing the remaininglightthrough so passengers inside the bus can see the world outside. We have achieved a similar effect, but the innovation lies in using an incredibly small amount oflightto reflect an image so that the efficacy of the underlying solar module is preserved.This is accomplished via proprietary techniques that combine concepts from color science and human visual perception.”

The result is solar panels that can take on virtually any color and appearance: asphalt shingles, clay tiles, or even logo or custom artwork. The product has just been released into the market and will help rebrand solar panels as a luxury product, not just a home efficiency upgrade. SolarSkin is about 10 percent more expensive than traditional photovoltaic rooftop systems.

Tesla recently launched its Solar Roof system, which uses attractive solar tiles made from tempered quartz glass to replace conventional roof tiles and shingles (the solar tiles are also three times stronger). Currently four styles of solar tiles are available: textured, smooth, slate, and Tuscan. From the street, these look identical to their standard shingle equivalents. The degree to which the solar tiles resemble conventional roofing materials depends on a special coating that makes the tiles appear opaque at street level. The Solar Roof system is about 30 percent more expensive than a traditional photovoltaic rooftop system.

Dyaqua, an Italian start-up, has recently designed its “Invisible Solar” photovoltaic system. These tiles look identical to traditional roofing materials such as wood, slate, and terra cotta. The system looks opaque but is translucent to sunlight. The supporting frame of the solar tile is a composite plastic material that is dyed during the manufacturing process to achieve the desired appearance. This customization is ideal for historic buildings that must maintain traditional-looking roof tiles, or have unique geometries that are not suitable for traditional solar systems.

In December 2016 Sistine Solar installed its first SolarSkin panels on a house in Norwell, MA, matching a cedar pattern. Even though the system is more expensive than typical photovoltaics, it’s not slowing down business: Sistine Solar now has 200 homes seeking installations, mostly in Massachusetts and California.

“We think SolarSkin is going to catch on like wildfire,” says Sistine Solar co-founder Senthil Balasubramanian. “There is a tremendous desire by homeowners to cut utility bills, and solar is finding reception with them—and homeowners care a lot about aesthetics.”

“We need to make solar panels as appealing as electric cars have become,” said Tesla CEO Elon Musk in a recent interview. “It needs to be beautiful, affordable, and seamlessly integrated. If all of those things are true, why would you go any other direction?”

For Further Discussion
We need to make solar panels as appealing as electric cars have become. It needs to be beautiful, affordable, and seamlessly integrated.Elon Musk, CEO, Tesla