Autonomous cars aren’t great readers. Now a new film will help cars read signs as well as we do.

A little graffiti on a stop sign won’t prevent a driver from recognizing the word stop and braking accordingly. But an altered sign can send our autonomous cars flying at well above the speed limit. Now, thanks to research team at  University at Buffalo, SUNY, there is a new film that casts unmistakable circular rainbows that will remove all ambiguity for the eyes of our self-driving autos.

GPS and LIDAR aren’t enough to make our autonomous cars behave according to the law. A few years ago, when researchers at the University of Michigan slapped a sticker that read “Love/Hate” on a stop sign, driverless cars misread it as a 45 miles per hour speed limit. More recently, researchers from McAfee applied a little tape to the middle bar of the “3” in a 35 mph speed limit sign, causing two Teslas to accelerate by 50 mph, thinking the sign said 85.

Newer Teslas, and newer versions of the MobilEye camera they once used, won’t fall for the same trick, but there is clearly a need for signage that doesn’t so easily foil self-driving vehicles. The colors and contrast of the signs currently on the road weren’t designed for them. 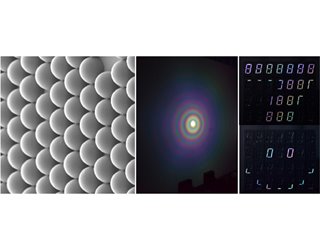 A new film of tiny tightly packed hemispheres casts concentric rainbows that will help our cars read. Photo: The University of Buffalo
“In our daily life, color comes from pigment or dye—from chemical color—or, from physics, prism induced rainbows,” said Qiaoqiang Gan, a professor of electrical engineering at the University and co-author of the paper “Multiple concentric rainbows induced by microscale concave interfaces for reflective displays,” published in Applied Materials Today this August. “However, the colorization mechanism from this type of substrate is totally different. The colors are introduced from the interference of optical beams reflected by these structures.”

Gan’s film is made up of microscale hemispheres. Because they are so small and close to each other, the light bouncing off any single dome gets interference from its neighbors. The result is a rainbow bullseye.

“Originally, we thought the mechanism was similar to soap bubbles, where you can see color because of thin film interference,” said Gan. “However, after further investigation, we recognized that the color was introduced by reflective light interference.”

The colorful circles produced by the film—up to 10 concentric rainbows—are unlike any rainbows seen in nature. So when they are used with signage, they can easily be recognized by an AI system. And when a driver’s headlights hit such a sign, the rainbows flicker, offering more signals for pattern recognition.

Take Our Quiz: The Past and Future of the Self-Driving Car

Like any new technology, feasibility is one thing, the cost of production, another. But Gan and his team have shown that the hemispheres can be produced inexpensively and at a large scale. The film they made for the paper was produced with roll-to-roll processing, at a relatively low cost that is likely to be even lower at large scales.

Though the colorful film is likely to have its greatest impact on our roads, it may have other applications as well. Robots in factories or warehouses could more easily read signs to direct them. The team also hopes the film will have some use in amusement parks. A haunted house, for instance, could have some flickering colorful ghosts, or characters that are red from one angle and green from another. “When you play in these rooms you could have a headlight,” said Gan. “In that case you can introduce a lot of fancy visual phenomenon.”