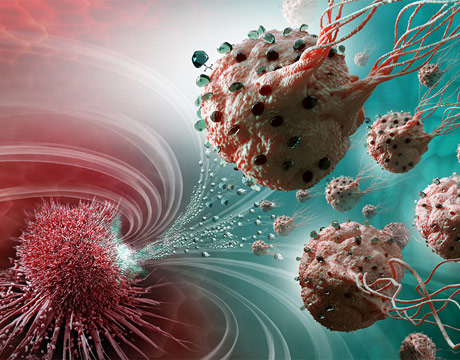 A top challenge in cancer therapy is being able to deliver the lowest possible amount of chemotherapy drugs to kill tumors, without impacting healthy cells. Researchers are keenly interested in developing nanocarriers, tiny particles that can be programmed to seek out cancer cells and release cancer-killing drugs.

The problem, however, is that the amount of drug actually delivered into the tumor cells is quite low, compared to the amount of drug the nanocarrier originally contained. This is because the pressure between the tumor and its surrounding tissue prevents the nanocarrier from penetrating deep inside the tumor. As a result, it cannot reach the tumor’s hypoxic zones: areas of low oxygen content where metastasis is believed to take place.

Now a team of researchers, with funding support from the National Institute of Biomedical Imaging and Bioengineering and other organizations, is developing a unique approach for getting more cancer-killing drugs into these low-oxygen regions. The team, led by Sylvain Martel, professor and director of the NanoRobotics Laboratory, Department of Computer and Software Engineering, Institute of Biomedical Engineering at Polytechnique Montréal, has engineered a specific type of bacteria to carry drugs into the tumor using magnetic fields.

Martel has focused on a bacteria called magnetococcus marinus, or MC-1, which thrives in deep, oxygen-deprived waters. MC-1 cells, which contain chains of magnetic iron-oxide nanocrystals, tend to swim along local magnetic field lines and toward low-oxygen concentrations based on a two-state aerotactic sensing system. Their internal sensors allow them to migrate to and maintain their position at areas of low oxygen.

In the initial experiment, mice that had been given human colorectal tumors were injected with either live MC-1 cells, dead MC-1 cells, or as a control group, nonmagnetic beads (roughly the same size as the bacteria). “The injection was made into the tissue directly adjacent to the tumors, after which the mice were exposed to a computer-programmed magnetic field, meant to direct the cells or beads into the tumor,” explains Margot Kern, science writer for the National Institute of Biomedical Imaging and Bioengineering. “Upon examination of the tumors, the researchers found minimal penetration of the dead bacterial cells and the beads into the tumor, whereas the live bacterial cells were found deep within the tumor, especially in regions with low oxygen content.”

“By themselves, these bacteria don’t do anything useful,” states Martel. “But by controlling the magnetic field with direction and various intensities, we can make them behave like nanorobots. For instance, we can switch to their oxygen sensors and then autonomously they will seek low oxygen concentration if we turn off the magnetic field. If we apply a higher directional magnetic field, within a specific range of magnetic field strengths or magnitudes, then we can guide them toward a specific location in 3D while keeping their autonomous ability to avoid obstacles, etc. Then we can switch these modes at specific time to enhance the targeting ratio. We can also modulate the magnetic field following specific patterns and sequences basedon mathematical modelsto help them avoid obstacles, resulting in larger populations reaching the target hypoxic zones.”

The researchers also discovered that, on average, 55 percent of the injected carrier cells made it into the tumor, a much greater number than thetwo percent estimate for the current nanocarriers being used to deliver drugs.

"This proof-of-concept work shows the potential to tap into the intricate and optimized cell machinery of single celled organisms such as bacteria," says Richard Conroy, director of the Division of Applied Sciences and Technology at the National Institute of Biomedical Imaging and Bioengineering. "The ability to actively and precisely target drug delivery to a tumor will help reduce side effects and potentially improve the efficacy of treatments."

Future research for Martel’s team will explore several ideas, including seeing how effective their new method is in reducing tumor size, as well as its ability to carry and deliver other types of cancer-fighting molecules. Test results also showed that bacteria died within 30 minutes of being injected, suggesting they are likely safe in humans.

“We developed an approach to harness a specific type of bacteria that mimics exactly how artificial nanorobots in the future would be used treat cancers,” she says. “It has all the power, mechanical, embedded computation, and sensory systems that are required for fighting cancers, and which are packaged in a microscopic bodythat is well beyond our technological feasibility to create.”

Besides fighting cancer, other potential applications for these nanorobots are diagnostics, imaging, micro-manufacturing, and lab-on-a-chip systems.

Martel is obviously amazed and awed by these naturally occurring delivery systems.

“By putting these bacteria in our special platforms controlled by computer, these bacteria suddenly transform into the most sophisticated microscopic robotsthat you could ever dream of,” she enthuses. “Just look at their molecular motors with a rotor rotating 360 degrees in a stator, propelling these micron-sized bodies at an average of 200 body length per second.”

Further, she adds, think about being able to control these bacteria to perform just about any task, equipped with sensors that influence their displacement in an autonomous manner toward the active cancer cells, oxygen threshold detectors to reverse the rotary molecular motors back-and-forth to maintain position within regions of active cancer cells to deliver the therapeutic agents, autonomous obstacles avoidance, or power source.

“If you consider how long it would take for technology to do all that,” Martel continues, “and also be able to manufacture hundreds of millions of self-replicating machines at a low cost, you will understand why we have spent our efforts to harness what nature has already provided,instead of trying to build a version that would be far from the capabilities offered by these natural nanorobots.”

By putting these bacteria in our special platforms controlled by computer, these bacteria suddenly transform into the most sophisticated microscopic robots that you could dream of. Sylvain Martel, Polytechnique Montréal