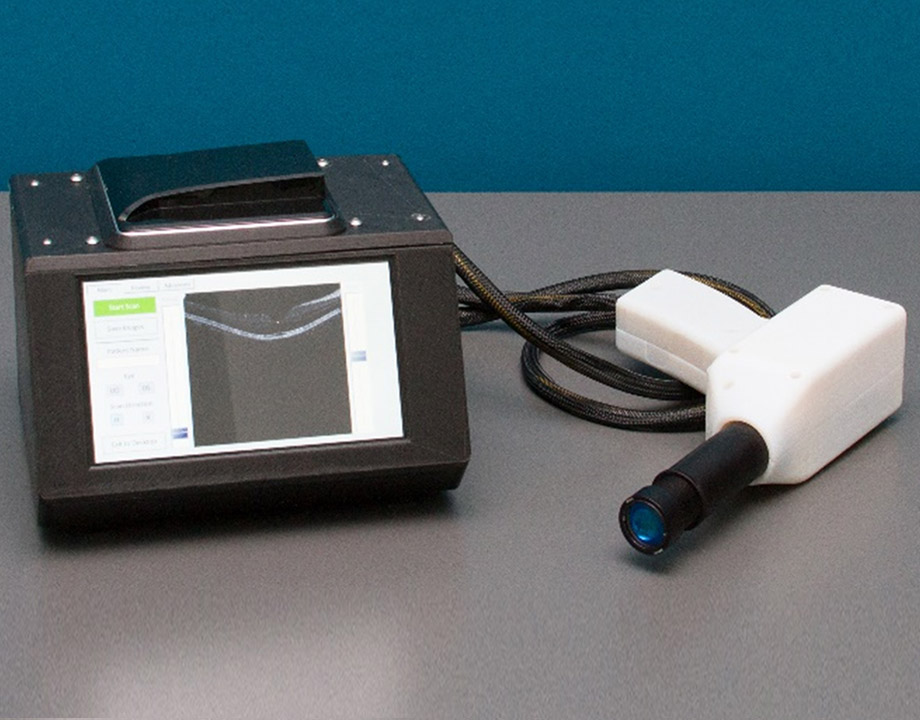 One of the basic tools doctors use to detect retinal problems is a bulky and very pricey device called an optical coherence tomography scanner. Having been introduced in the 1990s, it is not new and has become the main tool to diagnose afflictions like macular degeneration and diabetic retinopathy. The problem is the scanner’s hefty price tag of $100,000 or more. That keeps the device mostly in large medical centers that can afford it, and out of reach of smaller practices and medical centers. 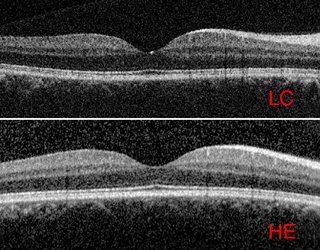 Retinal images taken by new low-cost scanner (top) were compared to standard scanner (bottom). Images from the new scanner were 95% as sharp, suitable for accurate diagnosis. Photo: Duke University Pratt School of Engineering
That may soon change with the development of a much smaller, portable scanner by Duke University biomedical engineers. The redesigned 3D-printed spectrometer weighs only five pounds, about 15 times smaller and lighter than standard machines, and is made mostly from off-the-shelf parts that drive down the cost to about $4,000 to $5,000, said Adam Wax, professor of biomedical engineering who led the development.

“The key to preventing blindness is prevention,” he said. “These devices are expensive. We set out to say, ‘How can we create a device that increases access while keeping in sight the minimum [accuracy] need for diagnosis?’”

The heart of the device is a new spectrometer designed by Wax and one of his graduate students. Rather than just taking a picture, OCT scanners send light into a patient’s retina. It builds an image of the interior of the retina by analyzing the shift in light waves when reflected back to the scanner. Standard spectrometers use metal components to direct light through a W-shaped series of lenses, mirrors, and diffraction slits.

The new design uses a housing of 3D-printed plastic to move light through a circular path. Wax says the ring formation resists misalignment because any temperature changes cause all components to expand or retract symmetrically. The balance keeps optical elements properly aligned, bolstered by a larger detector at the end of the system. In a standard scanner, temperature changes or bumps from slight mechanical shifts can create misalignments, however slight. 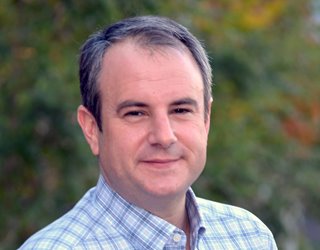 Adam Wax, Duke biomedical engineering professor. Photo: Duke University Pratt School of Engineering
Wax said tests show the portable scanner produced results in contrast that were about 5% less than the standard, more expensive scanner, more than needed to provide an accurate diagnosis. In a study described in a paper published in the journal Translational Vision Science & Technology, 60 patients were examined using both devices, half of them with retinal disease and half without. Using contrast-to-noise ratio as a comparison, the contrast from the smaller device proved 5.6% less than the standard machine.

More for you: Regulatory Framework for Medical Device Simulation

Michael Kelly, president and fellow of the Opthalmic Photographers’ Society at Duke, did not take part in the study but is excited about the device. “OCT for opthamology has been happening for more than 25 years,” he said. “There’s been a lot of technology upgrades, and OCT helps with [diagnosing] a number of diseases. The barrier has been the price tag of the units.”

Kelly said the smaller size allows it to be mounted on a slit-lamp device in an exam room and should provide much faster diagnosis. “Now, a patient gets worked up by a technician and waits for a physician; is sent to the imaging department and waits for the OCT, then waits for the doctor to read the results,” he described. “If there’s fluid, then there’s another test. The patient gets moved four times. All of that can be done in one screening.”

Wax began working on the project six years ago under a grant to develop a spectrometer using cell phone technology. “Liquid lenses are so cheap and widely used,” he said. “We used as much off-the-shelf as we could.”

The relatively rapid development of the device is due to 3D printing of the housing. “We have a spectrometer design that can live with reduced tolerances,” Wax said. “But we needed a loose structure that could flex and breath. 3D printing allows for a rapid design cycle. With injection molded plastic, the design cycle would not be as fast.”

Because of the reduced size and cost, Wax and Kelly see the device moving into smaller practices, including optometry. But the greatest potential lies in poor areas and the developing world. “OCT has really poor penetration in other countries,” said Wax. “With our devices, the economics really changes.”

Wax founded a startup called Lumedica to develop and bring the device to market. The company won a $1-million small business innovation research award earlier this year to improve the device. One of its current limitations is power fluctuation of the SLD during images, according to the paper. That is because of open-loop cooling for the light source, intended to keep costs down.

“Given the impact on the imaging signal from the retina, this will be resolved in future design iterations,” wrote the authors. Other improvements may include additional scanning patterns within the MEMS mirror and making the system entirely battery-powered.

Register for ASME’s Visualize MED: Modeling the Future of Medicine

In an Engineering Minute: Key Advantages of On-Demand vs. Traditional Manufacturing