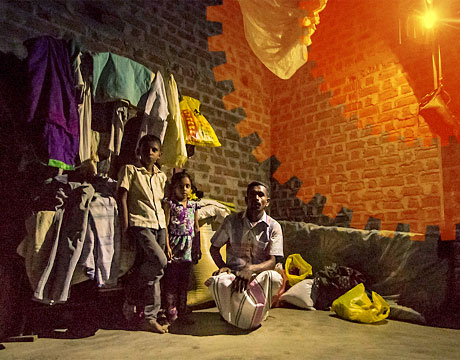 Light. The third thing created by God, the second technology created by man, it remains infinitely essential for the vast majority of human endeavors. And yet, for many, this basic necessity comes at a significant cost. 20 percent of people on the planet have no electricity, and for them, creating light means burning kerosene. The fuel is no good to breathe, causes millions of fires each year, and can cost each household as much as 30 percent of their income.

Now a group of Promethean engineers is hoping to put an end to that. Their GravityLight has the potential to provide cheap clean light to anyone on the planet who needs one. For twenty minutes of shining LED light, the energy deprived will need only to lift a 26-and-a-half pound weight six feet and let it drop. Prometheus, meet Sisyphus.

The project started in 2009 when the group tried to find a way to bring down the cost of solar lamps. Unfortunately, the bulk of the lamp’s cost came from the solar panel and the battery, two areas where you wouldn’t want to cut corners. So they turned, instead, to improving the windup flashlight.

They found the crank powered torches not very ergonomic: ten minutes of winding produced a mere ten minutes of light. And after just a few years the batteries would degrade, making the entire product useless. So they got rid of the battery altogether. “Removing the battery is how we got the cost down,” says Robert Ford, the team’s design engineer. “It’s a live power feed: as the weight descends it drives a DC generator and directly powers the LEDs. The Red Cross can put them in a box for two or three years and there’s nothing to degrade. They’re good to go.”

GravityLight users hoping to increase the brightness could add weight to the weight or extend the drop distance. But they won’t be able to extend the duration of the weight falls or he light shines. “Drop time is dependent entirely on the LEDs,” says Ford. “The LEDs act as a break on the generators and the speed of descent. However fast the gears are turning, is how fast the bag is dropping.” But the standard six-foot setup already sheds five times the light of a kerosene lamp.

In early 2014 the group produced 7,000 for field trials and 2,000 of those went to developing countries. They learned a few things.

For one thing, the weight was too heavy for children and the elderly. So they added a pulley. Children were the cause of another modification as well. “They would treat it as a swing, play with it, jump on it, and seriously stress the gears,” says Ford. “Now if you jump on the bag, a clutch will release and the bag will descend to the ground—in a controlled way but quickly and effectively.”

Ford did his own stressing of the gears to increase the overall robustness of the lamp. “We beat up the gears a little bit, did some subtle things to make them run as cleanly and efficiently as possible,” he says. The new gear teeth profiles are less susceptible to stripping and overload. Combined with new materials and other tweaks, the latest version of the lamp is a much hardier version than its predecessor. Where the first iteration would completely fail if not put together perfectly, the newer lamp can be “assembled in quite a rough and ready manner,” says Ford.

The new lamp also has surface mount LEDs instead of the through hole. They require a lens package but are much more efficient. The GravityLamp also has sockets so that lights (and a radio) needn’t reside only near the weight.

At the moment, though, the R&D will be taking a back seat as the team turns their attention to sales and distribution. But if LED technology continues to improve at the same pace that it has in the past decade, the lamp will improve on its own. “LEDs double their efficiency every six months,” says Ford. “If we just stop development now, the product will still get better over time.”

The GravityLight is likely to ship sometime this year. Wherever it goes, its clean sure light will make the most basic of necessities safe for everyone.

For Further Discussion
LEDs double their efficiency every six months. If we just stop development now, the product will still get better over time.Robert Ford, design engineer, GravityLight