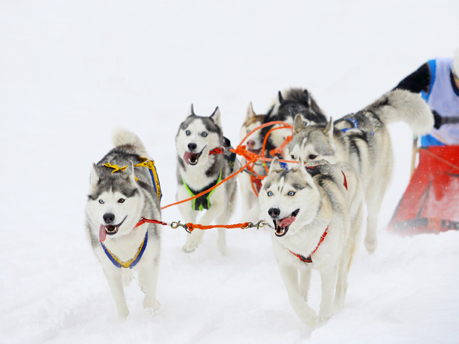 Little did I know when I sat down to watch Disney’s movie Eight Below (released in 2006) that I would learn about leadership and teamwork from a movie inspired by an expedition in which a team of sled dogs were left behind in Antarctica. These magnificent animals reminded me of some lessons that are equally valuable in the corporate world.

1. Identify and follow one leader. We can learn a lesson from the sled dogs about how to create a culture where loyalty is transitioned to a new leader by the former leader. In the movie, a dog named Jack was the soon-to-be-retired leader of the team, and the human leader was grooming Maya to be the new top dog.

Although this transition had not been finalized when crises occur, Jack not only gives up his leadership role, but stays behind so that there is no confusion as to whom the team will rely on. This leadership behavior seems less common in the corporate world, where many executives officially step down but remain dominant behind the scenes, confusing employees and setting up their successors for failure.

2. Good leaders protect team members. When one of the dogs gets hurt falling off a snow bank, Maya places her body on top of the injured dog and covers him throughout the night. The remainder of the pack crowds around offering warmth and support. How many leaders in the corporate world are as willing as sled dogs to make personal sacrifices for their team members?

3. Team members empower their leader. For the pack dogs in the film, support goes both ways between the leader and the team. When Maya, the lead dog, is hurt, Max fills in as the leader. He then saves Maya from being left behind and a certain frozen death.

"Make no mistake about it—a great leader is the essential first ingredient of success," says John L. Mariotti, president and CEO of The Enterprise Group. "However, I have yet to see an aspiring leader succeed without a group of devoted and competent followers, all pulling together."

4. Great leaders need great followers. The role of the follower has been undervalued in popular culture. Not every dog, or every person, is genetically or socially programmed to be a leader. Sled dogs do not waste energy fighting for the lead. "Great followers are instrumental in the success that is attributed to great leaders," says Mariotti.

5. A goal or purpose keeps teams together. The "Eight Below" dogs were purpose driven; they worked together to stay alive. The most basic definition of a team is a group of individuals that despite differences in education, compensation, or experience work together toward a common goal. Does your team have a purpose, does every member of the team know and understand that purpose, and is that purpose clear and motivating enough for individuals to put the team’s goal ahead of their personal wishes?

The "Eight Below" dogs were purpose driven; they worked together to stay alive.