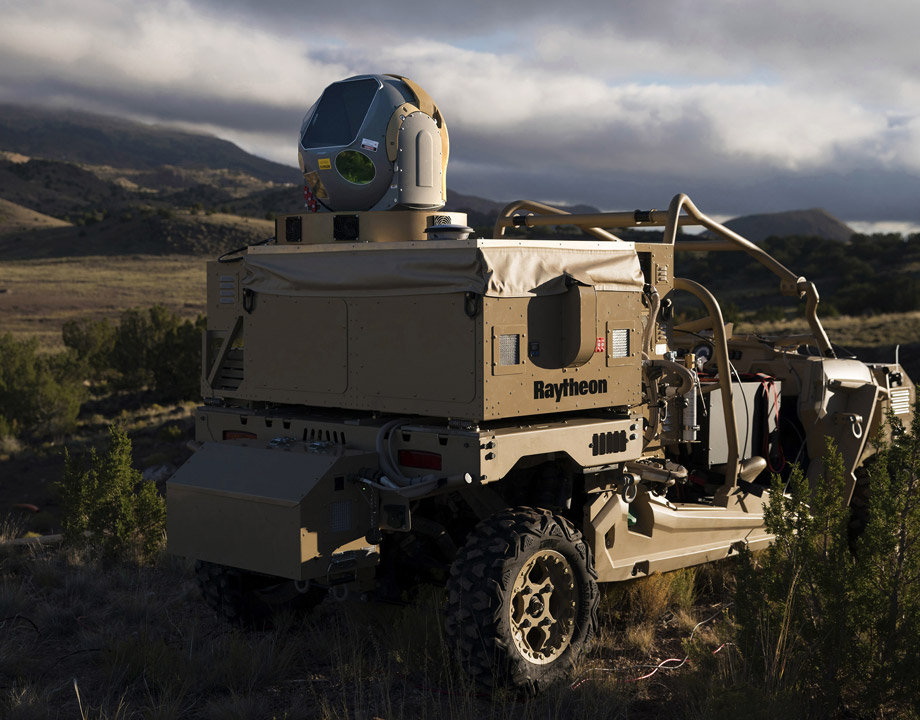 The High-Energy Laser Weapon System can detect, identify, and instantly knock UAVs out of the sky. Photo: Raytheon

Laser Weapon to Shoot Down Drones

Private unmanned aerial vehicles—drones, for short—have become more numerous and capable over the past decade. But with the skies filling up with quadcopters and other micro-aircraft, the military, airports, Secret Service, and privacy-prioritizing citizens have been looking for something that can properly shoot them down.

“The emergence of the drone threat has really created the need for a directed energy weapons suite that can aid in the defeating of these drones,” said Justin Martin, the chief engineer for the high energy laser program at the Raytheon Company in Cerritos, Calif. 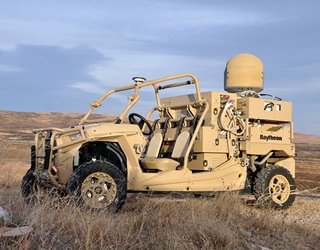 The US Air Force is testing the drone-killing laser system that is mounted on an all-terrain vehicle. Photo: Raytheon
Now Raytheon has a new tool that literally zaps drones with a laser, sending them crashing to the ground. The company’s High-Energy Laser Weapon System, as the drone killer is called, uses Raytheon’s multi-spectral targeting system to track and target pesky, pint-sized aircraft. It can then fire a high energy laser which completely disables the drone. The whole system sits on the back of a ground vehicle.


Engineers have been developing other anti-drone countermeasures. One technology uses GPS jammers and other radio-frequency tools to highjack and redirect a drone, while high-powered microwaves can disable an entire swarm. The new laser weapon is not so gentle.

“You are very precisely delivering focused energy to actually heat and physically destroy the target—melting it and burning up the electronics,” Martin said. “You get a hard kill.”

The laser weapon has other advantages: It has a much longer range than alternative anti-drone technologies, and it doesn’t require a munition, minimizing collateral damage.

And it’s superfast. “It can quickly target a drone and then re-target another drone, rapidly in succession,” Martin said. “It’s a speed-of-light engagement.”

Further Reading: Long-Range Drone Takes Off, Lands like a Bird

The tracking and targeting technology can pick up and lock on to the smallest and fastest moving targets. The biggest engineering challenge facing Martin and his team was optimizing the electro-optical/infrared sensor to make this possible. “Finding these small, fast moving drones which might be flying in front of different backgrounds, above buildings or mountains—it makes the proverbial needle in haystack sound easy.” He admitted, however, that participating in field demonstrations where the system knocks drones out of the sky like so many clay pigeons is great fun.


The system needed to differentiate between drones and birds, or even drones camouflaged as birds. The company had already developed a radar system using the Ku band—a section of the radio spectrum with a wavelength between 2.5 cm and 1.67 cm—that can zero in on drone-sized targets and “really see the features, behaviors, and motions of the target to determine what it is,” Martin said.

With an output in the 100 kW range, the laser needed a powerful, but mobile electricity supply. Martin’s team turned to Formula One racing, which had developed high energy-density lithium-ion batteries. “It gives us the punch we need for our laser with a proven stable and safe chemistry,” he said.

Further Reading: The Race for Space Weapons Speeds Up

Raytheon is already working with a variety of defense and aviation authorities to provide countermeasures to drone threats. But celebrities hoping to liquidate paparazzi drones will have to find another solution.

“What we’ve designed is intended for civil agencies—government agencies and the military,” said B.J. Boling, Raytheon’s director of business communications. “We don’t sell to private citizens.”

Michael Abrams is a technology writer based in Westfield, N. J.