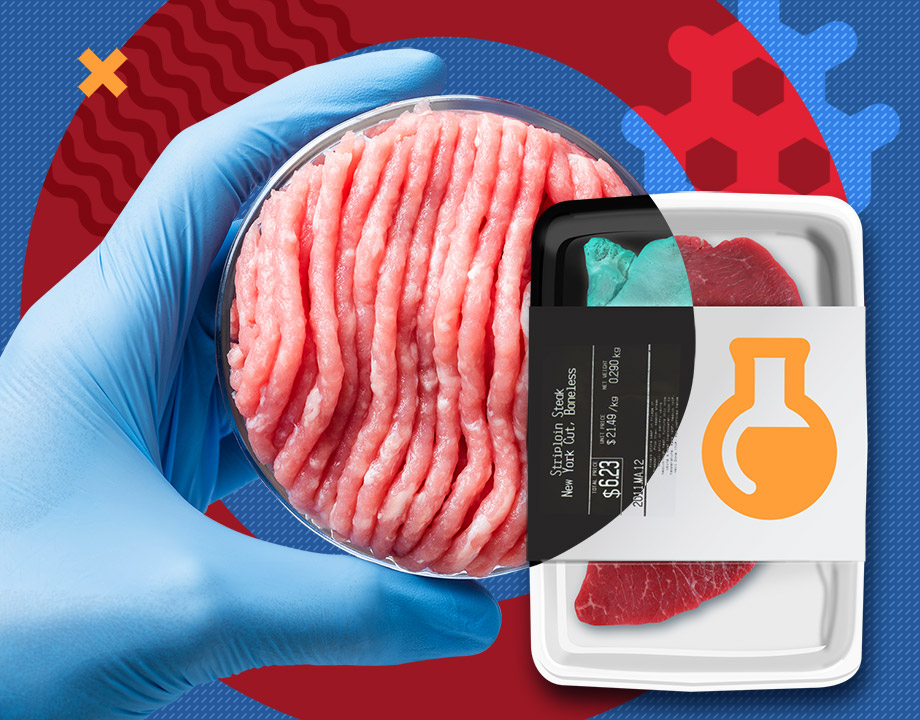 Harvard researchers are using tissue engineering to grow meat in the lab, but it will need some work before it’s ready for the grill.

Many of us have experienced the sizzle and aroma of steak on a grill. Now, we are one giant step closer to sourcing that meat from a lab rather than an animal.

The work comes from the lab of Kit Parker, a professor of bioengineering and applied physics at Harvard University’s Paulson School of Engineering and Applied Sciences (SEAS). Parker is best known for growing artificial organs using a technique called immersion rotary jet-spinning, but he is also a culinary wiz, which is where this story begins.

Ten years ago, Parker was featured as a judge on the “Food Network Challenge” and more recently, he’s challenged his own students to design a barbecue robot. So, it’s no surprise that Parker dreamed up the idea for lab-grown meat while barbecuing. 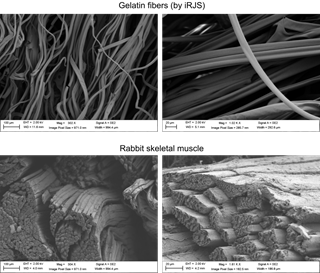 Microscale comparison of gelatin fibers (top) and natural rabbit skeletal muscle (bottom). Scanning electron microscopy images show similar fiber diameter and texture for gelatin scaffolds or skeletal muscle. Photo: Luke MacQueen, Harvard SEAS
“Barbecue is taking the cheapest cuts of meat and cooking them low and slow,” he explained. “This activates the enzymes in the tissue to break down the really stiff proteins called collagen, which basically hold the meat together.

“Collagen acts as a scaffold for the meat, much like our [jet spun] nanofibers act as a scaffold for human cell tissue engineering. I realized that if we could use an edible polymer to make a scaffold, we could probably grow meat in the lab using the same concept.”

That was when Parker’s two worlds, food and engineering, collided.

Right now, the lab is working mostly with cells from rabbits and cows. The process starts with building an extracellular matrix. Parker’s team then seeds this scaffold with a variety of animal cells, including stem cells, and growth promoters. The scaffold’s mechanical properties prompt the cells to form different types of tissues, such as muscle and connective tissue. 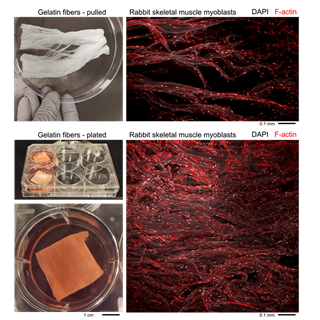 The lab builds the scaffold using a previously developed technique called immersion rotary jet-spinning, which has been used to design everything from wound dressings to bullet-proof vests.

The device looks very much like a cotton candy machine, Parker said. The edible gelatin polymers are mixed with solvents (a mixture of water and ethanol) and added slowly into the machine, which spins them rapidly. The centrifugal force stretches the polymers into elongated, fibrous strands and causes the solvents to evaporate.

Then engineers use the strands to build a scaffold that prompts cells to grow into muscle and fatty tissue structures that mimic the structure and texture of meat. Once they seed and layer the matrix with animal cells, they place it in a bioreactor that mimics conditions within the animal’s body. They then give the cells time to grow and develop.


After about one month in the bioreactor, the final product looks a lot like meat. In fact, the lab ran a texture profile analyses comparing the bioreactor product to real rabbit and cow meat. They found that the lab-grown meat matched everything you would find in grocery store-bought meat with one exception: it lacks the thick contrails of fatty deposits found in mature animals. This marbling is key to flavor, explains Parker. 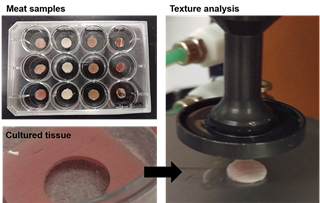 Mechanical testing of synthetic meat. Mechanical compression and rheometry, done at different temperatures to account for cooking, provide a sense of how the meat would feel in the mouth. Photo: Luke MacQueen, Harvard SEAS
“Understanding how the fat grows is a very important part of getting the marbling you want to have in a filet mignon or in a piece of bacon,” he said.

To solve this issue, Parker explains, they are working on a method that triggers the cells to enlarge rather than divide, through a process known as hyperplasia. They plan to release a paper on these advances in late 2020.

It is essential to get this fat ratio right, not just for taste, but to enable the product to succeed on the market. Meat has been a part of the human diet for about 2.6 million years, and humanity’s cultures reflect what they eat. So, if people don’t recognize the product as meat, it will never replace traditional livestock practices. 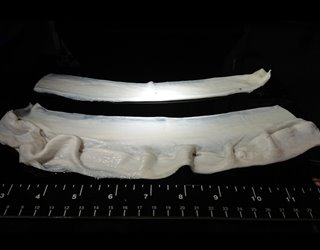 Jet-spun gelatin fibers form a scaffold to grow cells in ways that mimic natural muscle tissue. Photo: Luke MacQueen, Harvard SEAS
“We’re offering people something that’s cleaner for the environment, that maybe tastes better, and has more nutritional content,” he said. “But we need them to be comfortable with it. We don’t want to disrupt their perception of what they’re eating. We want it to look like the stuff their grandmother fed them.”

Parker is hopeful that the lab-grown meat will be palatable for meat-lovers—himself included—especially with rising concerns about feeding a growing human population while mitigating the effects of climate change.

“Think about all the costs that go into farm-raising livestock,” he said. “That immense cost combined with the methane production from cows alone is a huge concern. This method would be a huge cut out of our carbon footprint.”

If the product is a success, the next hurdle to replacing farm-raised meat is scalability. This is mostly because it takes strong, high-quality cells to successfully adhere to a scaffold and survive, Parker said. To overcome this barrier, Parker’s team is developing animal stem cell cultures that will create a replenishing supply of cells that can be grown in any lab in the world.

Parker believes synthetic meat could be ready for commercialization within the next few years. The Food and Drug Administration and U.S. Department of Agriculture will then put it through vigorous testing before clearing it for supermarket shelves.

It is a prospect that should excite foodies, and especially those interested in more sustainable alternatives.

Cassie Kelly is an engineering and environmental writer based in Columbus, Ohio.