Kites May Be Wind Power Solution

Kites May Be Wind Power Solution 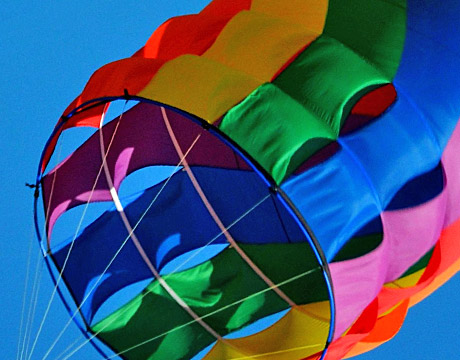 The wind is up there, right now, blowing continuously and free to all. But harnessing it to make electricity continues to be a costly affair. The typical two megawatt wind turbine has a price tag in the millions. And trying to tap higher, stronger winds with a turbine sends the cost up exponentially.

But the cost goes down, and efficiency goes up, when you throw out the tower and replace it with a kite and a bicycle wheel.

“I’d been a kite surfer and a wind surfer, and was brought up sailing and stuff like this, so I knew that quasi-2D structures could take an awful lot of wing loading,” says Rod Read, airborne wind energy developer, resident of the windy Isle of Lewis in Scotland, and founder of Windswept and Interesting.

Read noticed that most airborne wind solutions out there relied on rigid wing structures. With or without a tower, “Anything rigid is going to have that cubic mass scaling problem,” he says.Kites, on the other hand, stay cheap at any scale. Read designed a ring-like series of kites that get pulled up—and are stabilized—with a smaller pilot chute. Thanks to the tension of the lines between kite and bike wheel on the ground, the force is efficiently transmitted from on high. Connecting multiple kites with networked lines limits their movement and smooths out their flying.

“As they’re smaller wings, they don’t have the massive, thick, heavy material requirements of a larger wing. The wing loading on each individual kite is kept to a minimum, but you could have the same wing area. The lines can easily take huge collected loads,” says Read. “You get a whole heap of lift and thrust from networked kites.”

While a typical kite at the beach can stay up even while dancing at the edges of the wind, Read naturally wanted his to stay where the wind was strongest. He used two hula hoop-like bands between the kites and the wheel to keep the kites moving across the wind with the lines separatedso that he could transmit torsional power. Figuring out why required some investigation.

“I thought, ‘You can transfer that energy,’” says Read. “It’s not done anywhere in mechanics because it’s not rigid. But if you want a soft structure to transfer torsion, what you have to do is find a way ofkeeping those lines expanded.” It turns out that the diameter of the circular wings, the line tension, and their distance between each other is crucial for determining how much torsion the system can hold as well as how much can be taken out.

To store that energy, Read currently uses the battery on his electric bike. “I put the bike upside down in the field, tie on the kite to the crank. The kite spins around, charges up the bike. I pack the kite away and that’s it, I’ve ridden 100 e-bike miles on the kite. I’ve used the bike to boil kettles and charge my phone and charge an inverter.”

But kites have the potential to power a lot more than one bike, as the networking doesn’t end with multiple kites on a single line. Read says they can be tied together in hexagonal arrays over large areas to produce massive amounts of power. “And the bonus is you have aggregate stability on your lifters,” he says. “If a gust were to come through it really reduces the amount of movement one kite will take, itsoftens the impact.”

And if one kite does get damaged you won’t need a crane or a BASE jumper to fix it. A sewing machine will do the trick.

Read says his kites are “The most scaleable of the airborne wind energy concepts.” Could they someday supply all the world’s electricity needs? On the airborne wind energy forums that Read frequents, some think so, imagining globe-spanning networks of kites, funneling power to the earth. “If I’m off skiing or something I always think ‘Aw, man I could just sling a line between these two mountains and fill this void with kites,’” says Read. “I do get the odd fantasy like that.”

In the meantime, Read hopes that individual systems will help provide cheap, clean power to those in need. That’s why he keeps his plans open source, even though he’s working on what he calls a househusband’s budget. “Bike technology is super simple and super cheap and available worldwide, so people can replicate that,” he says. “That’s put a big positive smile on my face, thinking I might go somewhere some day and see someone doing this.”

If I’m off skiing or something I always think: ‘Aw, man I could just sling a line between these two mountains and fill this void with kites.’Rod Read, founder, Windswept and Interesting