Keeping the Lights On?

Keeping the Lights On? 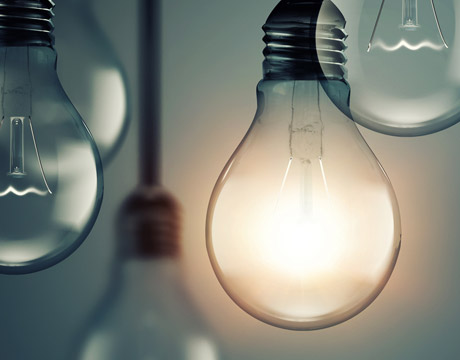 Change can be difficult. When you’ve spent your whole life with a certain way of overcoming the darkness, you don’t necessarily jump at the chance to find a new light. But with rising costs and falling energy efficiency, it looked as if the day of the incandescent light bulb had ended. Familiar and pleasing to the eye though they were, it still appeared it was time for them to go the way of the eight-track player.

But a team at MIT has been working on new technology that just might help the incandescent light bulb stay alive and compete with both light emitting diode (LED) bulbs and compact fluorescent lamp (CFL) bulbs. The answer may be looking you in the “mirror.”

“Our S3Tec Energy Frontier Research Center, funded through the Department of Energy, had a team working on ways to tailor the emission of a hot surface,” says Professor Gang Chen, the head of the department of engineering at MIT. “Electricity converting into light efficiency is interesting. It can be infrared when you’re talking about incandescent, which is not useful. But maybe reflecting [light] on a cold surface could help and the designing went forward.”

Chen says the setup is that wavelengths would go through filament material, hit a mirror-like substance, a photonic crystal, and reflect until it heats up to give light to the bulb. “The eye picks up the light easier this way,” he says, adding that it helps with part of the issue of incandescent efficiency.

It can go beyond just lighting a room potentially, with an added benefit being that some of the energy could be recycled in effect, he says. “There is also the possibility that this can translate to areas like thermo-photovoltaics but more exploration would need to be done here,” he says.

The next steps include further demonstrating the efficiency to understand just where it might rank as a competitor to LEDs and CFLs. “We need to do a better technology assessment in how it will do against the energy-efficient bulbs now being sold and to see whether this is just a niche market or something bigger,” he says. “It’s definitely been a good starting point.”

For Chen, it’s been energizing just watching people run with old technology and make it come to life. “Sometimes it just takes the right timing with design tools in place and good energy,” he says. “It’s been great to see what’s happened so far.”

Regardless of its future, the incandescent light bulb remains a marvel, one more example of Thomas Edison’s well-known persistence, which has been lighting homes since the 19th century. This latest work doesn’t necessarily mean people will some day stop buying the energy-efficient LED and CFL bulbs but it shows that old technology doesn’t necessarily have to be thrown away. Sometimes we need to look at how it might work differently. “It does get you thinking about how this all started,” he says. “The bulb itself is an amazing invention.”

For Further Discussion
We need to do a better technology assessment in how it will do against the energy-efficient bulbs now being sold and to see whether this is just a niche market or something bigger. Prof. Gang Chen, MIT