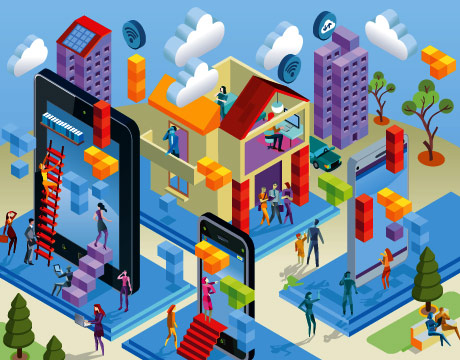 But neither IoT nor IIoT can function properly unless the sensors the attendant software also used by these systems can talk to each other using a common, standard language. The problem is, several potential standards and standards-setting bodies are now competing with each other and more may be joining the competition soon. How the race to set standards will shake out is far from clear at this point, though all interested parties agree that race will need to come to a definitive conclusion in the near future.

Many with their hats in the ring provide already existing standards or methodologies they would like to see applied as the de facto IoT or IIoT standard. The stakes are high. Management consulting firm Accenture predicts the global Industrial IoT landscape will be worth $14.2 trillion by 2022.

Appropriately enough, IoT applies to commercial use of this tied technology (like the coffee maker), while the IIoT will be called upon by large manufacturers and for industrial use (such as for the turbine example).

The pertinent OMG standards play a role in the security, dependability, and efficiency for the IIoT and include OMG’s data distribution service, system assurance, and systems modeling language.

Consortiums on the Rise

Several of the organizations interested in IIoT and IoT standards setting are consortiums. For instance, in December 2013, the Linux Foundation formed the AllSeen Alliance, which now boasts such powerful players as LG Electronics, Qualcomm, Panasonic, Sony, Cisco, and Microsoft, among others.

Participating alliance members use the framework to create their own custom apps that bring devices onto a wifi network, he adds.

Though the aim of the AllSeen Alliance’s isn’t to establish AllJoyn as the IoT network protocol, with its impressive roster of members that could happen, Harlan says.

“It’s just that with nearly 250 members the platform would apply to many devices,” he says.

Members are committed to work together so their devices can interoperate across both the IIoT and the IoT, he adds.

“When you have two devices on a local network, how do they discover each other and speak the same language so they don’t need to be programmed to work together?” Harlan says. “Well, with AllJoyn, any device that joins the network announces itself and its capabilities to the network.

“So switches and light bulbs that are on the same network can interoperate without any customization,” Harlan says. “They use a standard set of controls that have AllJoyn on them and those controls allow you to control that light.”

“We believe interoperability is vitally important for IoT, we’re not going out on any deep limbs with that,” Harlan says.

Other potential standards setting bodies include the Industrial Internet Consortium formed in March 2014 by Intel, Cisco, AT&T, GE, and IBM to develop standards specifically for the IIoT.

For the IoT, a new networking protocol, Thread, has security and low-power features that make it better for connecting household devices than other technologies such as wifi or Bluetooth, says Chris Boross, president of the Thread group.

Meanwhile, in July 2014 Intel, Broadcom, and Samsun Electronics formed the Open Interconnect Consortium, which will develop standards and certification for IoT devices, according to a consortium statement. The standards will be based on the Constrained Application Protocol, a software protocol that allows simple electronics devices like low-power sensors, switches, and values to communicate interactively over the Internet.

To use Harlan’s analogy, IIoT and IoT standardization is now at the same place HyperText Markup Language stood in the middle 1990s.

“When the Internet first appeared you had some alternate implementations of how to do browser-based Internet viewing,” he says. “Then people figured out it was better if each browser interpreted the same code base and that the real business was in the chip and the routers and infrastructure on which all this passes.”

In other words, the race is on for standardization, but it’s also on to become the Cisco of the IIoT and IoT world.

For Further Discussion
We believe interoperability is vitally important for IoT, we’re not going out on any deep limbs with that.Noah Harlan, president, AllSeen Alliance