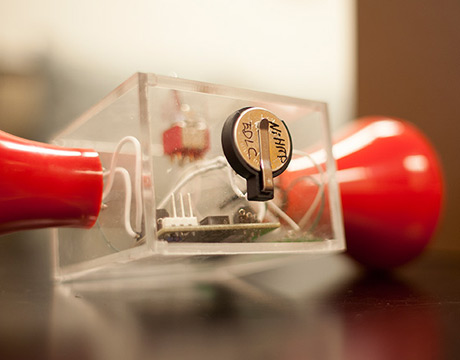 A red hand-crank flashlight cut in half, with a small energy-storing supercapacitor installed in the center. Image: Melanie Gonick / MIT

Mircea Dinca, associate professor of chemistry at MIT, has worked on his share of interesting projects, but he didn’t expect to find himself delving into area of energy storage devices. He finds himself with a new appreciation for them now, however, after leading a team that created a supercapacitor without graphitic carbon. The development could lead to energy storage devices storing and delivering more energy.

“We’re synthetic chemists and we make new materials and get a kick out of thinking outside the box,” says Dinca. “Sort of imagine what are the important metrics for any important project and we’re thinking about whether we can involve any material that is outside the norm. Here, supercapacitors require highly conductive material with high surface area so that you have large capacitants that scale with surface area. You need to combine electrical conductivity with surface area and, working with very high surface area materials, our interest was to also make them electrically combusted. Our work took years but the results have been very positive so far.”

Working without graphitic carbon, a carbon normally found in supercapacitors, Dinca actually saw multiple advantages, and termed his new class of materials metal-organic frameworks, or MOFs. “Our metal organic frameworks clearly have organic components but they are well defined molecules,” he says. “It’s organic, it’s made partly of carbon but they are well defined components. And in terms of any property you can think of, they are very different from graphitic carbons. They are better thought of as a different class of materials than what had been used previously.”

The material can be made in temperatures much lower than those needed for graphitic carbon, he says. “For what we’re doing, you should be able to produce it at room temperatures as a solid and it also doesn’t need chemicals we don’t want to use like sodium hydroxide,” he says.

Their capacitor has a much lower internal resistance, he says. “We have shown it can work at, say, one and a half volts but we would like to improve it, and there’s no reason to think it couldn’t get to four and a half volts. If we can reach it, then it will look very attractive to a lot of commercial companies.”

There were a few surprises along the way but one stood out. “We didn’t optimize it at all and, despite that, we are still beating commercial devices in a number of metrics,” he says. “But we want to push it forward with optimization. It will further improve in metrics.”

It was tested at 10,000 cycles for the first demo of the new material. “We saw very good reproducibility,” he says, “and very good capacitance retention, meaning less than 10% lost in capacity.”

In addition, a decent number of adjustments were made from the first iteration to the current one and they had to do with learning how to make the devices, along with choosing proper current collectors. But it’s been an enjoyable ride that just might lead to more forays into device work.

“I’m a curious person by nature and you get a sense of the fun engineers are having,” he says. “This is what it’s all about: stepping outside your comfort zone to see if you can add new abilities to the mix.”

We didn’t optimize it at all and, despite that, we are still beating commercial devices in a number of metrics.Prof. Mircea Dinca, MIT