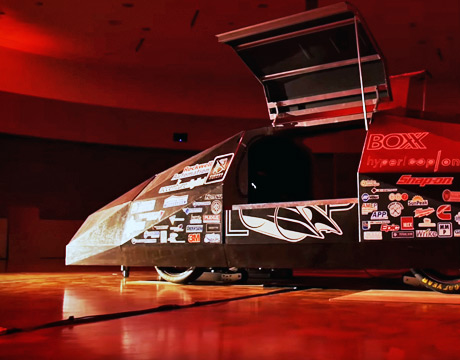 Traffic on the way to work seems to get worse with each passing year. As you sit in the latest traffic jam, realizing you will be late for work and behind on the day, you may look longingly from your car to a commuter train going by. Or maybe you hear the whoosh of the subway flying by below.

But maybe you should be thinking completely outside the traditional commuting box.

“The Hyperloop,” famed for its goal of travel through airlock and pressurization, is being worked on with the thought of reaching hundreds of miles per hour in speed, taking passengers through underground tubes with incredible efficiency.

And, if its ultimate goal ever comes to fruition, it may actually be college students in research labs who deserve a good amount of the thanks. SpaceX’s Hyperloop Pod Competition engages students in order to source new innovations and breakthroughs. And it has many colleges entering to see who may be able to tube their way to transportation history.

Zuf Wang, president of the latest competition leg for the University of Wisconsin’s team, “Badgerloop,” says the competition has been an enriching educational opportunity. “You’re getting out of the classroom and into a whole different arena,” he says. “We have around 50 members giving many hours each week to see where it can take us. We were very encouraged by our results in this last competition.”

Although they finished outside the top three—those teams were allowed to put their pods on actual runs—BadgerLoop was given an innovation award in the contest. Wang believes this was partly for making their pod, with its carbon fiber shell, scaled for humans. “We were thinking about practicality, visualizing someone sitting in there and being in on the ride,” says Wang, who is now pursuing his industrial engineering degree at the school and received his bachelor’s degree from UW in the same subject.

The first competition was judged on a wide range of criteria, he says, focusing on aspects such as how well thought-out the design was, as well as the feasibility of the design.

For the second upcoming competition, the focus is on speed, he says, which was also a focus of the first competition. This time around, BadgerLoop is honing in on the high-speed emergency braking scenario and are optimistic for a higher finish this time, he says. “We tried for too much in some ways in the first competition,” he says. “We will be simpler in our approach and we’re excited about our capabilities this time.” The second competition is slated for summer 2017.

Wang can’t wait for another chance to compete but believes he has personally gained a great deal, regardless, from getting to oversee a large team on such an assignment. “The project management aspect, the coordinating of so many talented people and making the most of our time, I see that carrying into many things I’ll do going forward,” he says. “These students have so much excitement from just wanting to see this become real. You just want to play your part in something which could change things in terms of convenience and opening up people’s worlds more. You want to be a part of the future.”

You’re getting out of the classroom and into a whole different arena. We have around 50 members giving many hours each week to see where it can take us.Zuf Wang, Team BadgerLoop President