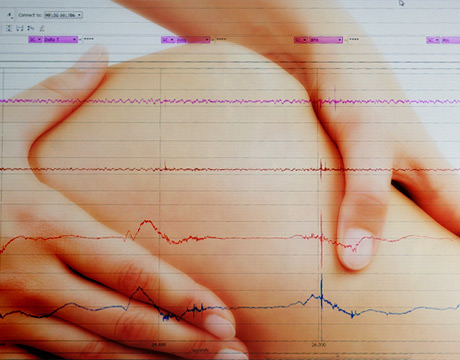 If Knees Could Talk

Most bioengineer-researchers listening to sounds inside the human body are focused purely on diagnostics, but Georgia Tech Professor Omer Inan and researchers in his lab have a somewhat different mission.

Their objective is to improve human health by thinking about sensing as a longitudinal assessment tool, tracking an individual’s health over time rather than trying to diagnose one person against the population. One reason for this approach is the amount of variability in body sounds from one person to another.

“If I measure sounds from 10 different people, the signatures are going to look completely different. The big challenge is how to get any information from these measurements that makes sense where there is so much variability among people,” Inan says.

His work started out in the cardiovascular area when as a doctoral student, he modified a home weighing scale to sense the vibrations of the body in response to the heartbeat in order to measure changes in cardiac output and contractility. The idea was that daily monitoring of heart failure patients at home could provide doctors regular updates so that therapies could be adjusted remotely and any worrisome changes dealt with immediately. In addition to the scale, his lab’s work now also includes a patch worn on the chest that continuously measures the surface vibrations of the chest wall in response to heartbeat.

More recently, when the Defense Advanced Research Projects Agency (DARPA) called for research proposals on wearable technologies for assisting rehabilitation, Inan began thinking about how his sensing work might be applied to joints. As a three-time NCAA All-American track star at Stanford University and the school record holder in the discus, he knew from personal experience that joints can get creaky if they are injured or even overused.

DARPA’s interest is to reduce and rehabilitate soldiers’ knee and ankle injuries, whether on the battlefield, from marching dozens of miles with heavy backbacks, or crouching in cramped spots for hours. These cause musculoskeletal injuries that are among the top reasons for discharge for active duty service members.

Curious about the sounds he heard and felt himself, he started thinking about rehabilitation from an engineer’s perspective, which went something like this: After the knee has something torn and then repaired, there is some sort of mechanical disruption that has to be resolved over time by the body. “Addressing it as an engineer could be interesting,” he thought.

Inan’s hypothesis, which he hopes to scientifically prove, is that the sounds are coming from natural friction of the rubbing of surfaces inside. Using the DARPA grant, which recently ended, he and his team developed a knee band with microphones and piezoelectric film, a highly sensitive vibration sensor, for listening to and measuring the sounds inside the joint. The recorded audio was graphed, much like an electrocardiogram, and matched to the joint’s range of motion to see when the knee creaks and pops during the time the leg extends and bends.

Among other things, the researchers learned that the acoustic pattern of an injured knee is much different from that of a healthy knee. This and other initial findings have recently been published, and the work is continuing, funded by another four-year federal grant.

“It’s going to allow us a few more years to get more into basic science. We [can] get a better understanding of where these sounds are coming from and at a more fundamental level how injury affects the signatures of the sounds,” Inan says.

In the long term, additional study will increase the impact the research will have, he said. In the shorter term, the team is looking at opportunities for simpler products based on the technology, such as a brace with a microphone embedded that goes around a knee to provide basic information about the state of a person’s injury after surgery. It is a first-level tool providing feedback, he says; for instance, your sounds are more consistent than last week. Over time, the device could improve as a decision aid indicating whether the knee is ready to move to more intense activity.

Now, Inan hopes that in the future medical research will build on the acoustical sensing technology his group is designing and eventually decode the sound into useful patterns for a variety of applications. So far the focus has been on injury recovery, but there could be applications for areas, such as osteoarthritis. Minor degradation over time in those surfaces is a factor in the formation of the sound, and one should be able to hear different signatures associated with them, he says.

“My general philosophy on sensing research is that sounds and vibrations of the body have not been explored as much as other sensing modalities, and I think there is a lot we can learn,” says Inan. “There are many physical exams. The stethoscope is the hallmark of a doctor; and other physical exams where [health care providers] are tapping on the patient and listening, moving things around. Mechanical assessments are really important but not as well fleshed out in terms of sensing technologies and especially wearable sensing technologies.”

My general philosophy on sensing research is that sounds and vibrations of the body have not been explored as much as other sensing modalities, and I think there is a lot we can learn. Prof. Omer Inan, Georgia Institute of Technology