Ice Fishing from Your Vehicle

Ice Fishing from Your Vehicle 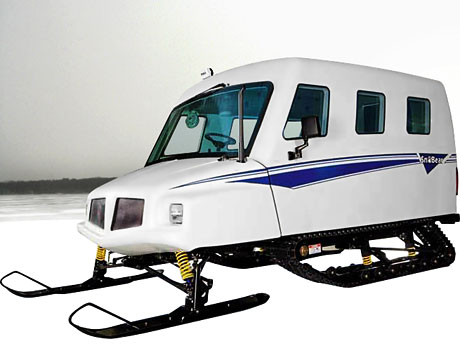 The SnoBear is a heated vehicle designed for comfortable ice fishing. Image: SnoBear

Let’s face it: one of the big complaints about ice fishing would be that it’s...uh...cold. Well, how about just driving to the spot you like, parking, and fishing in your vehicle at a comfortable 72 degrees? The SnoBear is a track system vehicle that can hit 20+ mph and allows you to not only fish in toasty conditions, but, just as importantly, quickly move to the next spot if there isn’t anything biting.

Moving on tracks made of Camoplast, the body is fiberglass on the outer shell and has solid foam for warmth. The motor is actually a 1.6-liter Hyundai. The original version, however, had a Daihatsu 3-cylinder, according to engineer Tom Lykken, the original designer.

Mario Nozzarella, general manager of SnoBear USA, Fargo, ND, explains that one of the keys to the design is that the PSI of the tires is less than one. “Obviously the more pressure on the ice, the more apt that it will go through it,” Nozzarella says. “Another element is the Acralift System [the hydraulics], which will raise and lower the vehicle so when you drive out on the ice you can push a button that retracts the tracks and it lowers it down a foot. It lets you set flat on the ice and when you draw your holes, then you are closer to the water. Instead of two or three feet off the ice, you’re within 10 inches instead.”

The brake system is a key aspect of steering, an independent brake on each track, two pedals side by side and small enough to push both of them down with your foot, Nozzarella says. “If you push down on your foot, we have a disc brake on each side of the track and can stop both tracks,” Nozzarella says. “If in a tight turn, you can push on the brake on one side and turn the ski. It can turn around on a dime.”

The SnoBear website explains that the track system’s suspension “prevents the front tracks from lifting by always balancing the forces across the face of the track belt. This cancels any front lift effect due to drive line torque, no matter how much power applied, maximizing flotation and traction.”

Even though the vehicle can hit the 20s in mph, Lykken says most of the time, it won’t even be used past 15 mph. “You wouldn’t really have many people thinking about going faster,” Lykken says. “Unless you’re going on those 20 mile trips on Minnesota lakes.”

For improving comfort, there is a small propane furnace and you’ll find the thermostat control can have it set for 70+ degrees even if 40 below, Nozzarella says.

Lykken, who today is an innovation manager at Titan Machinery, focusing on planters’ farm equipment, says the response was strong to the product partly because of the passion for the hobby. “There are people who are very serious about fishing and you can do it for as much as six months out here in Fargo,” Lykken says. “This allows them to enjoy it without getting cold—and they can bring their friends.”

For Further Discussion
There are people who are very serious about fishing and you can do it for as much as six months out here in Fargo. This allows them to enjoy it without getting cold.Tom Lykken, designer, SnoBear