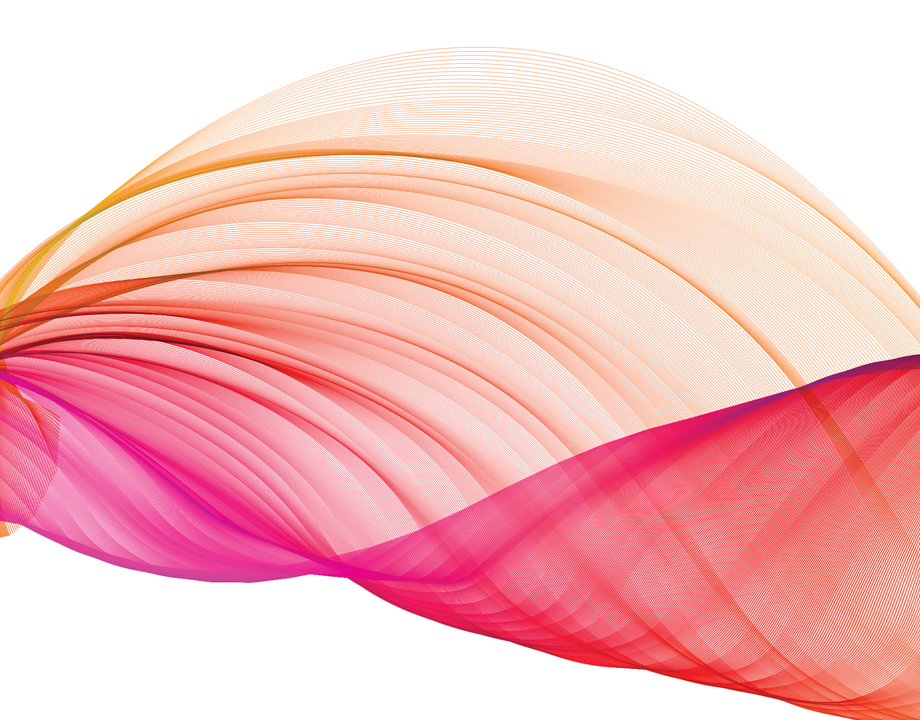 Engineers see themselves as problem solvers, and the COVID-19 pandemic has proven to be a problem like no other. While vaccines against the coronavirus are being manufactured and deployed, engineers are looking closely at indoor spaces, which have been implicated in fostering the spread of the disease. Even after the population has developed immunity against the virus that causes COVID, improving indoor air quality will no doubt remain a pressing concern.

After all, the main reason that the U.S. economy took a severe hit in 2020 was that the virus made it dangerous to gather in offices, restaurants, and other interior spaces. Viruses often spread through aerosols, particles, and other airborne droplets and can be breathed in by a healthy individual. Even before COVID, viruses such as the common cold and flu could run rampant through workplaces as the microbes wafted from cubicle to cubicle.

That means that the first line of defense for people returning to work will include HVAC engineers, doing what they can to make those buildings safer. It is the sort of issue that engineers could have tackled years ago, said William Bahnfleth, a mechanical engineering professor at Pennsylvania State University in State College and former president of the American Society of Heating, Refrigerating and Air-Conditioning Engineers (ASHRAE).

“Better indoor air quality was one of the things I was promoting because I became convinced, about 15 to 20 years ago, by all of the research I was seeing that our minimum standards were leaving a lot of quality on the table that was costly,” Bahnfleth said. “Performance that could be better. Sick leave that could be reduced. Sick-building syndrome symptoms that could be reduced. Better performance in school. I think there are a lot of reasons to go beyond simply, ‘does the air smell OK to you?’ ”

In fact, the technology to provide this safety already exists. What has been lacking is the recognition that providing these protections must be a responsibility of anyone putting up a building and calling it open for business.


Indoor air quality has been understood to be a health issue since the 1850s, but the focus of the HVAC engineering community has usually been on achieving and maintaining comfortable temperatures and humidity levels in an energy-efficient manner. That generally entailed producing much “tighter” buildings through improved windows and doors, sealing practices, and construction techniques.

Sealing up the buildings led to other concerns: Were occupants getting enough oxygen? Was there a build-up of toxic chemicals? Were tiny particles circulating through the air?

Even before COVID, filters were recommended in HVAC systems to counter some of these problems. But as filter density increases in order to capture ever smaller particles, so does pressure drop which could reduce flow through the system. That is why the most efficient filters—known as "high-efficiency particulate air" (HEPA) filters, which must be at least 99.97 percent efficient at capturing particles 0.3 mm in size—are not generally recommended for large systems. They might be best used in portable room-sized units, where their lower airflow levels can be somewhat effective. Still, Bahnfleth said, “adding filters is a no-regrets policy,” since they will make for a healthier building in any case.

Bahnfleth, who is also leader of ASHRAE’s COVID-19 Task Force, identified two other measures to protect indoor air spaces from viruses like the coronavirus: Dilution and deactivation.

The case for dilution is made by the low incidence of coronavirus transmission outdoors and by research in hospitals supporting the role of proper ventilation. Reducing the virus concentration in a volume of air seems to increase the required exposure time for a person to receive an infectious dose.

To reduce the amount of airborne virus in a volume of indoor space, the Federation of European Heating, Ventilation, and Air Conditioning Associations calls for “no use of recirculation,” meaning that fresh outdoor air must be brought in continuously and delivered without mixing with recirculated air. The European group also recommends flushing out buildings for two hours prior to occupancy. 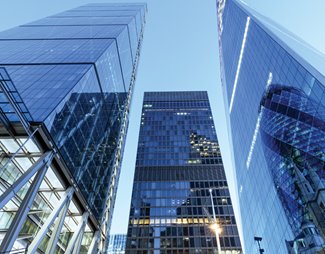 These ultramodern buildings in London are sealed tight to maintain environmental control. In the process, however, they may be trapping toxic chemicals and microbes. Photo: Getty
The recommendations in the United States are different, Bahnfleth said. “In the U.S., variable air volume (VAV) systems, which are essentially standard in office buildings, use a significant amount of recirculated air which is passed through filters and mixed with outside air,” he said. “These often provide five to six times as much air moving through a space than a fresh-air only system A typical VAV system might have six supply air changes [per hour] and the outdoor air that you are bringing in might amount to one or two air changes. That could be a better way to lower the concentration of airborne particles than going to 100 percent outside air, which is expensive and essentially wastes your investment in filters.”

Filtration has featured some important innovations in recent years, according to air quality researcher Kathleen Owen, a former ASHRAE vice-chair and now principal at Owen Air Filtration Consulting. Many of these new tech­nologies incorporate electrostatic capture such as synthetic non-woven filters. Filters that provide a good balance of mechanical and electret efficiency (meaning they provide a built-in dipole polarization) will almost always outperform a filter that relies solely on mechanical efficiency. The electrostatic effects in an electret-charged media are particularly useful in increasing the capture efficiency for submicron particles.

Mechano-electret filters also deliver lower airflow resistance, which translates directly to reductions in energy consumption and cost. However, the combination of different electret treatment patterns or charge distributions means that all electret filters are not created equal.

While ventilation and filtration go a long way toward reducing the risk of infection, increased air flow does spread the risk around a building in ways that may not be acceptable.

Edward Nardell, a professor at Harvard’s T.H. Chan School of Public Health, quipped, “Engineers, when faced with a contaminant, want to move air through a filter.”

Nardell conceded, “By the time particles get diluted in the room, make their way to the exhaust duct, and get mixed with air from other parts of the building, they die off to some degree. What comes back is nothing near an infectious dose. But if you’re in proximity to the source, even with dilution, the chance of getting infected is much greater in the room.” That concern increases as the source strength goes up.

“One way to look at this is if we envision people at various locations in a room. If someone is infected with COVID, there will be a high concentration of particles in his immediate vicinity,” said Max Sherman, a retired ventilation researcher at Lawrence Berkeley Laboratory. “Adding airflow has the effect of averaging out the concentration, which while better for those nearest the source, it is less good for others farther away—unless you can bring that average level down low enough that it is safe for everyone.”


What can be done to help those in proximity to an unknown but contagious source? The best strategy for that, Nardell said, is probably to have people wear masks: Evidence shows universal masking is effective at stopping virus transmission. But engineers would like to provide a solution that does not rely on a high level of occupant compliance.

One promising approach that both Nardell and Bahnfleth have been studying for years is called ultraviolet germicidal irradiation (UVGI). Ultraviolet light has been used for disinfecting air and water going back to the early 1900s and of late has been incorporated in robots to sterilize hospital rooms.

Recommended for You: Cleaner and Safer Workplaces After Coronavirus

Nardell illustrates the power of UVGI by way of a story of some research he did at an experimental tuberculosis ward in South Africa with Richard Riley, one the pioneers of environmental medicine. They discharged air from the ward into two separate guinea pig colonies on alternate days. One colony received air that had been treated with UV light and the other received untreated air. The colony receiving UV-treated air developed 80 percent fewer infections. 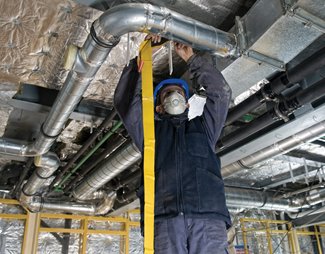 A worker seals an HVAC vent. Ventilation and filtration can reduce the risk of infection, but increased air flow spreads microbes around a building in ways that may be dangerous. Photo: Getty
Most commercial UVGI systems utilize mercury vapor lamps that emit at a wavelength of 254 nm. Light at that wavelength, while invisible, can cause skin and eye damage. Any UVGI application in occupied spaces must be shielded, which limits their effectiveness.

UVGI systems can be installed inside HVAC duct work, in unoccupied spaces such as empty hospital rooms and buses, or in an "upper air" arrangement in rooms with high ceilings, where they can be placed above eye level. These systems have been approved with power levels adjusted to within the recommended exposure limit.

Another potential solution is using even shorter-wavelength UV light, which can be produced by LEDs rather than vapor lamps. Recent studies suggest light at the 220 nm wavelength doesn’t cause skin or eye irritation.


In recirculating variable air volume systems that are so widespread in the U.S., UV treatment systems may be the best bet at cutting the virus load. Studies show the effectiveness of UVGI as being equivalent to an additional twenty or more air changes per hour in reducing the concentration of infectious virus. Nardell said the upper air approach may be especially effective because of the amount of mixing that can be achieved.

There are other promising technologies. Bipolar ionization, which ionizes oxygen molecules with both positive and negative charges, can bind to and deactivate many kinds of airborne particles, including viruses. Unlike previous generations of ionic air cleaners, these do not produce ozone. And a biological aerosol detection system the Department of Homeland Security has been developing could be used to activate responses such as additional dilution air from outdoors, increased levels of UV light, deployment of bipolar ions, along with other measures. 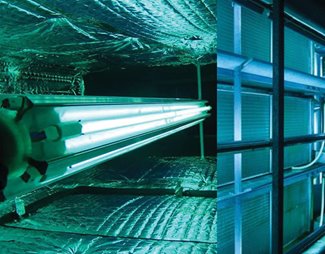 UVGI systems shine powerful ultraviolet light on either ductwork or on cooling coils. The light disinfects the air so that viruses will not spread through the ventilation system. Photo: Magneto
Even before the pandemic, improving indoor air quality was becoming a concern. Especially in hot countries in the developing world, buildings that had historically relied on natural ventilation are rapidly installing inexpensive air conditioning systems that lack a means of ventilation, causing significant disease transmission risks. These installations now must be amended to provide ventilation, perhaps along with UV systems that could be installed with the air conditioning units.

Nardell linked air conditioning, climate change, and disease transmission in an editorial published in the journal Indoor Air last year, just as COVID was spreading through the world.

“The escalating use of air conditioning globally is directly resulting in conditions favoring increased person-to-person transmission of airborne infections such as tuberculosis, influenza, and measles,” he wrote. “Unlike the gradual environmental effects of increased CO2 emissions, the impact of AC on airborne infection is nearly instantaneous.”

You May Also Like: Developing Ventilation Systems to Prevent Virus Spread

There will be no lack of challenges for HVAC engineers in the coming decades. Most of them will be under the broad umbrella of climate change.

Engineers certainly have the tools to break these connections and provide improved indoor air quality without damaging either health or the environment. Like other challenges that have been met and solved, it will take hard work, innovation, and a determination to see beyond what appear to be tradeoffs to the win-win solutions that represent the best engineering practices.