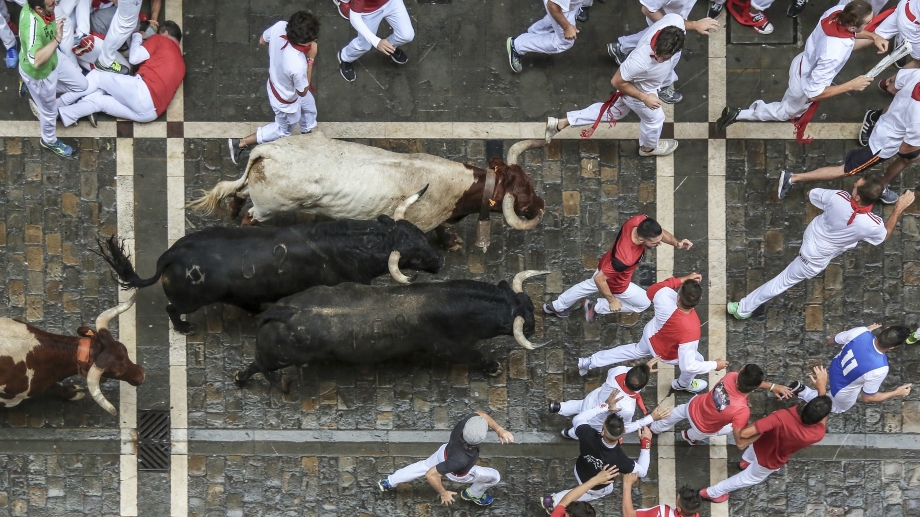 Researchers find that when panicked, people will run at different speeds. That can cause a problem when the slow block the swift.

When city planners and architects want to engineer the flow of humanity—on sidewalks, through intersections, and in and out of doors and passageways—their hypothetical pedestrians walk at a uniform pace. But people don’t tend to move at the same speed. And they don’t always walk. For instance, when a pack of six angry bulls is stampeding down the street, “pedestrians” tend to run.

Strangely enough, no one has really taken a close look at human locomotion in emergencies, dangerous situations, or on the streets of Pamplona during the San Fermin festival. But now a group of researchers at the Buenos Aires Institute of Technology along with Pamplona’s University of Navarra and the National University of La Pampa, have mapped the behavior of the mozos at the famed week-long party. And they’ve found that people fleeing bulls do not behave like cars in traffic.

“In the pedestrian dynamics industry there is a lot of pedestrian simulation software, where designs of buildings and complex facilities are tested,” said Daniel Parisi, a professor in the department of computer engineering at Buenos Aires Institute of Technology, “All the models, up to now, consider only walking velocities.”

To capture what happens at non-walking velocities, Parisi and his colleagues set up a camera overlooking the Pamplona streets designated for the running of the bulls at the festival in July of 2021. “Here we have people running from real danger,” said Parisi. “It’s really valuable because you can’t do this in an experiment—if you have a real emergency, you can’t go there and put in cameras before it happens.” From the safety of a balcony, they filmed the event and used a bit of software they had developed to track the speed of runners as they fled the barreling bovines.

The running of the bulls has drawn thrill-seekers from all over the world for more than a century. 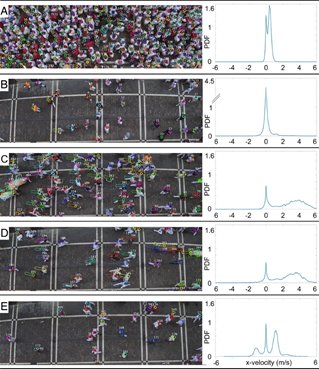 Researchers identified individual runners by their clothes. Software followed the movements of some two thousand runners and the bulls that chased them.
“They were all running, packed close together. They passed along and up the street toward the bull-ring and behind them came more men running faster, and then some stragglers who were really running,” wrote Ernest Hemingway in his 1926 novel, The Sun Also Rises. “Behind them was a little bare space, and then the bulls galloping, tossing their heads up and down.”

Parisi—and his software—analyzed this same scene 95 years later. Identifying individual runners by their clothes, the software followed the movements of some two thousand runners and the bulls that chased them.

They discovered that, unlike cars on a highway, which slow down when traffic is thick, at Pamplona when the density increases, so does the velocity. When the bulls approach runners, the runners speed up to get away, and fly into the slower moving runners ahead of them. Though it certainly makes psychological sense to move faster when a beast with horns is upon you, it’s this phenomenon that leads to tragedy. So the city of Pamplona keeps the density of runners to a more-or-less safe level—the bulls tend to pass 20 people at any given point in their jaunt to the ring. “At a certain speed, you need a certain amount of space,” said Parisi. “If the density was greater than that, falling people could trigger more falling people and finally collapse the whole system.”

Parisi and his colleagues also identified three kinds of pedestrians: those that stay close to the walls, and let the bulls pass without running; those that run to the side when the bulls approach, and the daredevils that do what they can to run in front of the bulls. “Eventually they go to the side,” said Parisi of this third group. “They get tired, and the bulls never get tired.”

Parisi is hoping his research will help building designers and civic engineers better plan streets and passageways for potential situations where everyone is running. As for anyone hoping to try their luck at Pamplona, his research has given him some insight as to the best tactics for avoiding a goring. “Maybe if you stay at the side near the walls of the street you can see very close with a reasonably low risk,” he said. “My best advice would be do not run with bulls, it’s a dangerous thing—always there is someone that gets hurt.”