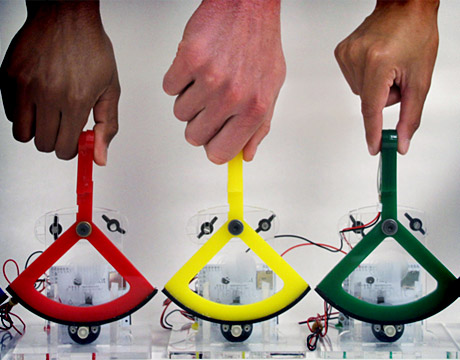 Learning engages the senses but one sense that is often neglected is feeling. Hapkit, a new device at Stanford University, may make some feel differently.

According to Stanford’s website, the Hapkit allows users to input motions and feel programmed forces in one degree of freedom. This enables interactive simulation of virtual environments that represent realistic physics (such as springs and dampers) and creative new touch sensations (like textures and buttons).

Allison Okamura, a mechanical engineering professor at the school, says Hapkit came about partly through the limitations seen with online courses. “Attention can be limited and you can’t have labs,” she says. “It seemed it would be interesting to take what we used as an in-classroom tool and [see if we could] make it accessible for anyone to use or build so they could do a hands-on laboratory as part of their online class. And, related to that, could you increase the engagement that students would have if, in these labs, people had that ownership over a device.”

The Hapkit used in the first online class, a haptics course partly involving how to program virtual environments, was developed by Stanford University graduate student Tania Morimoto. “We only let in 100 students and we purchased the material that would be used for those students,” Okamura recalls. “It was basically a box of parts and there was explanation on how to assemble, calibrate, and program.”

The parts included a low-cost microprocessor. Working with an open source hardware company led to Hapkit having amplifiers to run the motor as well as a sensor to measure the orientation of the motor on the device.

The results were strong, Okamura says. “We found 77 percent of students who finished the online course and did our post-course survey showed that owning the device and assembling it on their own was important for their learning and engagement,” she says.

A later iteration of this system utilized a 3D printed version in order for students to download the design of parts and print them. They also ordered parts such as motors. “Students could gather the parts and make it themselves,” she says. “It was also interesting to see them make mistakes through this iteration and see how you debug and interact with them through an online forum.”

An example of what they encountered in the class is programming a virtual wall. “On one side of the wall you feel nothing, but when you hit the wall, you feel a very stiff spring. You’re moving the handle and you hit something hard and it’s because you programmed it,” she says. “It can be an exciting feeling for a student. The continuing challenge for us is proving that there are better learning outcomes with Hapkit than without Hapkit. But the feedback we’ve gotten has been positive, and future results will hopefully lead to us to help change learning in a positive way.”

The continuing challenge for us is proving that there are better learning outcomes with Hapkit than without Hapkit.Prof. Allison Okamura, Stanford University