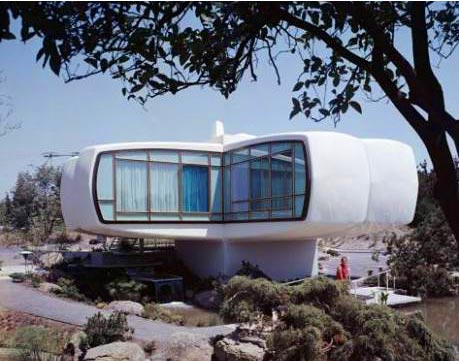 What the House Of Tomorrow Can Teach Us Today

Those were the adjectives that were expected to define late-20th century housing. By the middle 1980s Americans and Western Europeans were supposed to be living in white plastic Swiss crosses with windows lining the arms. Like pies on display, the houses were to be constructed on pedestals.

The team that designed the Monsanto House of the Future, a Disneyland attraction from 1957 to 1967, originally set out to create their vision for an affordable home for the families flocking into the housing market following World War II. Designed and engineered by Monsanto, Marvin Goody and Richard Hamilton of MIT, and Walt Disney Imagineering, the house was envisioned as something that could be quickly and inexpensively constructed on nearly any terrain and could withstand most any force of nature, said Gary Van Zante, architecture curator at the Massachusetts Institute of Technology Museum. That's not the home they finished with, and only in small part because they were working with the most popular material of their day—namely plastic—and with building techniques that hadn't yet caught up with that material, he said.

In 2010, Van Zante gave a presentation on the Monsanto House of the Future.

When it was completed, Disneyland visitors could tour the house of the future set in the far-off year 1986, complete with an imaginary family and futuristic household appliances such as microwave ovens.

We may snicker at the retro-future, but it's something we can't escape. Projections of the future have to represent what's actually happening in the days in which they're imagined.