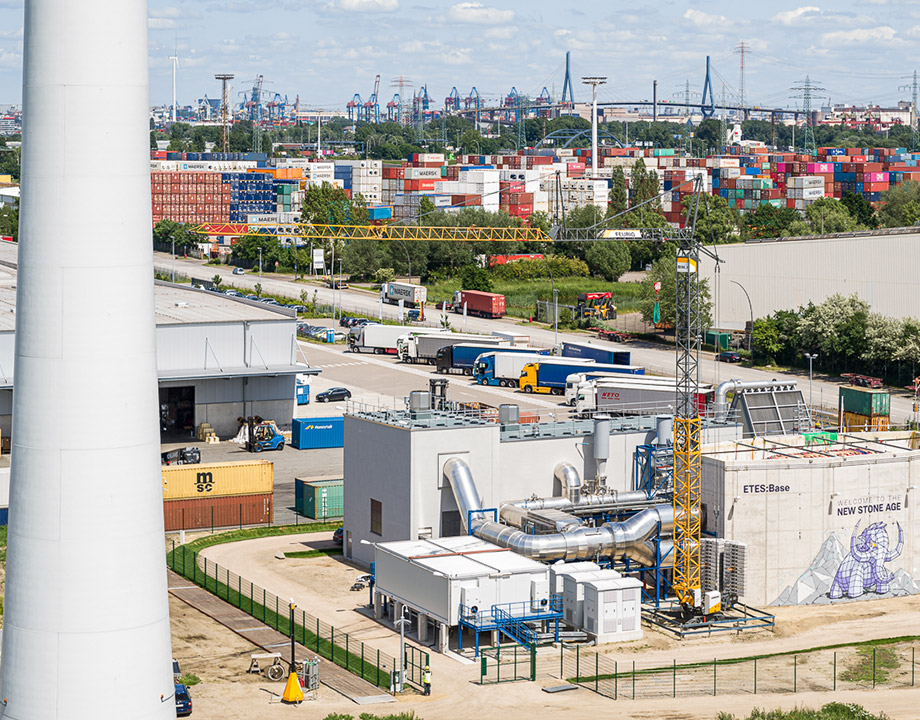 As renewable sources of power generation become established, integrating their energy production into the electric grid continues to be a challenge. A variety of battery deployments, for storage and production, have been introduced but large-scale storage projects remain few outside of traditional hydroelectric pumped storage. That could change if a large-scale pilot project using volcanic rock as a medium proves effective.

Renewable energy firm Siemens Gamesa is now putting its electrothermal energy storage project through startup at a site in Hamburg, Germany. If successful, company officials believe it could be a key player in enhancing renewable energy development by storing excess energy until it is needed on the grid. They also believe the technology can easily be fitted to existing fossil-fuel-fired generation plants that are closing, using existing equipment to produce electricity from the new storage medium, and send to the grid.

The project uses 1,000 tonnes of volcanic rock as the storage medium. Electrical energy is converted into hot air through a resistance heater and blower, heating the rock to 650 C. When demand peaks, the system’s steam turbine reconverts the energy into electricity. Built on the site of an aluminum smelter, the pilot plant can store up to 130 MWh of thermal energy per week. Ultimately the firm wants the system to produce a minimum of 1 GWh.


Siemens Gamesa is one of the largest developers and manufacturers of wind energy systems and is looking to expand from that base. CTO Antonio de la Torre said the system can be economical using low-cost technology that can be retrofitted to existing plants. “It has to provide a cost below 100 euros per kWh [of installed capacity],” he said. “Our system can be built for 80 euros per kWh,” and costs would be even lower if built using components at an existing plant.

For comparison, lithium-ion batteries carry a cost of $200 per kWh or more, and are limited in size. They have a place in smaller applications, said de la Torre, but the ETES system can easily be ramped up in size and capacity.

Recommended for You: How to Destroy Lithium Ion Batteries 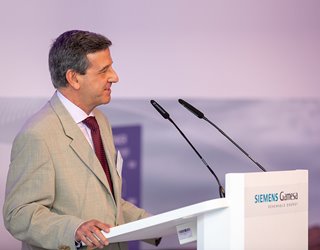 Antonio de la Torre said energy storage system can be economical using low-cost technology that can be retrofitted to existing plants. Photo: Siemens Gamesa
The plant is being developed and tested with the Institute for Engineering Thermodynamics at Hamburg University of Technology and local utility Hamburg Energie. The engineering institute is researching the design and thermodynamic performance of the solid bulk technology and Hamburg Energie is responsible for marketing the stored energy. According to Siemens Gamesa, the utility is developing highly flexible digital control platforms for virtual power plants. ETES could optimally store renewable energy at maximum yield using such an IT platform.

A key finding from an earlier, smaller project proved greater efficiency of a round shape for the container holding the rock. It has an increasing diameter on both ends, where inflow and outflow openings are located. It has a total content of 800 cubic meters of rock with a mass of 1,000 tonnes, covered with a one-meter-thick layer of insulation.

“We could not afford [to use] exotic materials within the current timeframe,” said de le Torre, referring to an emphasis on reducing greenhouse gasses in accordance with the Paris agreement. “And with different countries, the size of the plant has to be easily customized. So we thought of imitating nature through volcanic phenomena.”


Flexibility will be the key to what de la Torre and Siemens Gamesa believe will be the project’s success.  It can be applied in three ways, the most basic as a storage and power supply system together with a renewable energy source. It also can be attached to a fossil-fuel power plant or an industrial plant with large energy needs. Stored heat can be added to existing cycles. Finally, it can offer a second life for power plants. The system would replace generation, drawing electricity from the local grid or renewable sources, while using the existing steam cycle and operation processes.

You May Also Like: 6 Ways to Capture Tidal Energy

The system uses off-the-shelf components for 80 percent of its needs, according to the firm, and capital expenditures are up to ten times lower than that of battery storage. Unlike battery storage, there are no hazardous materials involved. Siemens Gamesa claims efficiency can be maintained at 98 percent while storing heat and up to 45 percent at full electric cycle.

The German government is committed to development of renewable energy and has provided development funds for the project. “Decoupling generation and consumption of fluctuating renewable energy via storage is an essential contribution to implementing the energy system transformation,” said Andreas Feicht, state secretary of the federal Ministry of Economics and Energy, at the plant’s inauguration earlier this year. “We therefore need cost-effective, efficient and scalable energy storage systems."

The Hamburg plant will be used to further fine tune operational algorithms and systems, but de la Torre notes the system proved feasible in earlier small-scale testing. “The bigger you go with this, the better economies of scale,” said de la Torre. “This is the state of the art in terms of knowledge of thermal storage.”