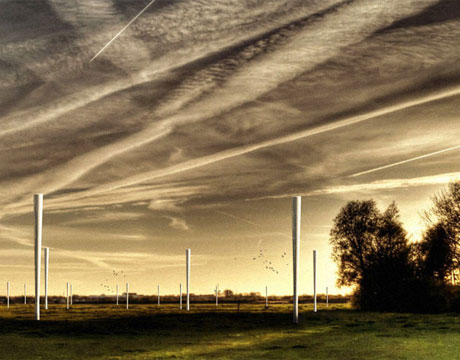 Bird killer. Eye sore. Noisy. Uneconomical. These are the big objections leveled at wind turbines and what keep the technology from peppering the countryside with greater density. But if each of these problems could be sufficiently defanged, wind would likely blossom into the cheap, sustainable, plentiful source of power it has often been touted to be.

The trick may be as simple as removing the blades.

That’s what the brains behind the Vortex Bladeless wind generator are banking on. Their single stalk turbine looks like a giant baseball bat balanced on a tee. Where the horizontal movement wind across the earth is what powers a conventional wind turbine, the Vortex Bladeless pulls its energy from vortices in that wind.

The idea first came to David J. Yáñez Villarreal, the inventor, and the founder and co-CEO of the company, while watching a video of the collapse of the Tacoma Narrows bridge. While some might see in the clip disaster and destruction, Yáñez saw something else. “The bridge was able to harvest the energy,” he says. “Why not try to develop a new tool to harvest energy based on this?”

That’s just what he did. After officially starting the company in 2010, they now have a product ready to exploit the breeze. The simplicity of the technology is what makes it effective and affordable. The bat-like part of the turbine—what they call the mast—is light, hollow, rigid, and made of the same materials as a conventional turbine: carbon fiber and glass fiber. When eddies hit it, the mast rocks back and forth, perpendicular to the direction of the wind, whatever that direction might be.

Changing wind directions, though, was a tiny problem compared to changing wind speeds. “This was probably the most difficult technical endeavor,” says Yáñez. Part of the solution comes from two concentric magnetic rings at the base of the turbine. “We are able to harvest energy at different velocities, but we have to transfer it efficiently. This is a technical point we are working on today,” he says.

They also operate as a frictionless bearing, requiring no oil and no maintenance. Obviating the need for BASE-jumper repairmen helps to keep costs low even after the initial outlay.

The systems efficiency also depends on the shape of the mast. Yáñez and his team tried dozens of models both real and virtual. They have a wind tunnel in their lab made of 80 fans blowing in the same direction. If wind in the real world were similarly unidirectional, the mast would have been more cylindrical at the top, that, is, more like a baseball bat. But with the potential for a change in direction thrown into the mix, a more conical top proved most efficient. As it stands, the Vortex Bladeless can harvest some 30 percent of the energy available in any gust, and Yáñez hopes to bump that number up by five points or so soon.

The company hasn’t been around long enough to put a real number on the lifespan of their turbine. But after some formulations, computations, and simulations, they estimate that a Bladeless will oscillate effectively for 19 to 35 years. That puts it in the general ballpark of conventional wind turbines.

But even if the new turbine proves a little less efficient and a little less durable than its pinwheeled counterparts, it certainly wins when it comes to the main complaints. It operates in near silence, mars a smaller portion of any pastoral vista, and it’s pretty hard to imagine how it could take out a bird. And, most important, it will cost about half as much as today’s wind turbines.

Thanks to a successful crowd-funding campaign, Yáñez and his crew will erect a 10-foot high pilot study in India. It will produce 100 watts and cost a mere $250. What’s likely to be the standard generator model—available in a year or so—will stand 41 feet high and produce four kilowatts. Two of them could power a home. Should Bladeless research continue apace, the team hopes to produce a 490-foot, megawatt version in 2018.

“Everything is going very well,” says Yáñez, “but we have a lot of work to do.”

For Further Discussion
We are able to harvest energy at different velocities, but we have to transfer it efficiently—this is a technical point we are working on today.David J. Yáñez Villarreal, founder and co-CEO, Vortex Bladeless