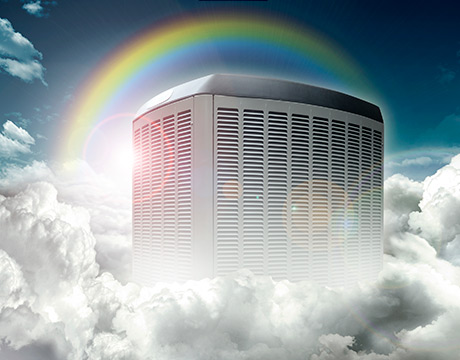 Air conditioners as we know them haven’t changed much since their invention in 1902. They still use a compressor, circulate refrigerants, and spit air outside as they cool air inside. Back in 1902—and for many years after—inventors and consumers weren’t too worried about energy consumption and the environmental hazards posed by chlorofluorocarbons.

While people today are more concerned about those subjects, air conditioners remain massive energy hogs. During hot seasons, a typical building uses 40 percent of its energy to cool air. On top of that, six percent of all the electricity produced in the U.S. is spent chilling the indoors.

Professor Ernest Chua, a professor of mechanical engineering at the National University of Singapore, and his colleagues hope to fix that. They have created a new air conditioner that uses no CFCs and a tiny fraction of the energy consumed by a traditional air conditioner. As a bonus, it produces purified drinking water.

“AC, in my definition, is both removing moisture from the air and cooling it,” says Chua. To do both, Chua’s AC deals with each task separately and sequentially.

First, the air is passed over paper filters coated with superhydrophilic chemicals, which separate the water from the air. The dry air is then passed through a counter flow system made up of pairs of wet and dry channels. Between 10 percent and 20 percent of the dry air passes through the channels that are kept wet, while the remaining air passes through the dry channels.

The air in the wet channels evaporates the water, borrowing heat from the dry channels to do so. The air that comes out the other end of the dry channels is both dry and cool. Thepercentage that went through the wet channels (and is now re-humidified) is sent back outside. But this waste air is also cooled and doesn’t create the heated microclimates found outside traditional ACs.

Learn about the fascinating history of air conditioning.

If you replace the compressors with evaporative cooling, then you reduce the electrical demand enormously. Prof. Jeffrey Gordan, Ben-Gurion University of the Negev

Each pass through the system cools the air roughly 6 degrees. To lower the temperature more than that, the air simply needs to go through the process a few times. Since humidity and temperature are treated separately, they can be precisely controlled, independent of each other. 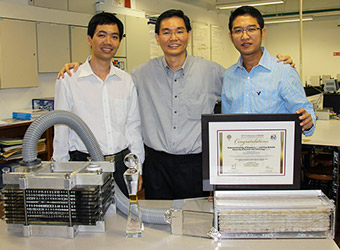 The moisture in hot wet air that is separated when it hits the filters can be sent right back into the environment. Or it can have a second life. After passing through the filters, it rolls right off and can be collected at the bottom of the machine—to the tune of 12 to 15 liters a day in a climate like Singapore's,where humidity is usually above 85 percent. That's quite a boon for a country where 50 percent of the water is imported, and 30 percent is recycled. "It's purer and free of minerals," says Chua. A fraction of the water produced by the AC can be used to run it. The AC needsa liter or so of water a day to keep the wet channels wet.

Aside from the cool moist air that is returned to the environment, Chua’s AC requires only a liter or so of water a day to keep the wet channels wet. But in a climate like Singapore’s, where humidity is usually above 85 percent, the filter pulls 12 to 15 liters of water from the air so that single liter of water won’t have to come from the water supply.

The new unit does become less efficient in drier air. That drawback though does nothing to reduce the massive amount of energy used to cool air.

“When you look at hot climates, their electrical peak demands are driven by air conditioning, whether it’s residential, shopping malls, or industry,” says Jeffrey Gordan, a solar energy and environmental physicist at Ben-Gurion University of the Negev, who worked with Chua on the project. “Now, if you replace the compressors with evaporative cooling, then you reduce the electrical demand enormously.”

If Chua’s AC catches on, it may slash the need for new power plants in developing countries, with a resource found wherever humans thrive.

“The energy input is from water,” says Gordan. “The chemical potential of water.” Michael Abrams is an independent writer.