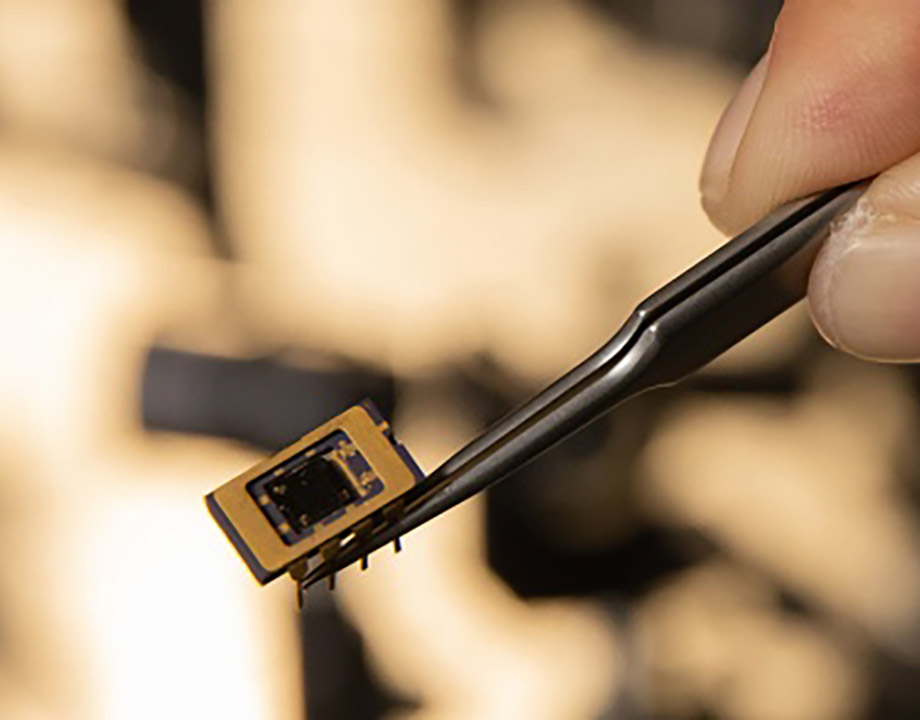 This tiny graphene drum vibrates when light hits and heats it. Photo: University of Oregon

How do you find out how strong the light is inside an engine? The answer has long been “You can’t”—the heat will destroy whatever light sensor you might be using. But now graphene, that atom-thick wonder-stuff, is about to change the world of light. Researchers at the University of Oregon have figured out how to create a graphene sensor that measures light mechanically.

“We were making little drumhead resonators out of graphene, studying the physics of their mechanical properties, and we noticed that the readout laser we were using to measure their resonant frequencies was heating the drums,” said Andrew Blaikie, a graduate student who lead the research at the university. “We had the idea that you could use this to detect the amount of light hitting them.”


The physics of the technology is simple: as light heats up the graphene, they resonate. “It’s a mechanical thing that can hear light,” said Benjamín Alemán, a professor of physics who runs the lab where the research took place. And because graphene tightens as it heats up, it has an enormous range of sensitivity, far greater than that of the light sensors—bolometers—used in phones and cameras today.

The team was able to make the drumheads orders of magnitude more sensitive by tweaking their geometry. In essence, the drumheads are simply a circle of material tethered to a substrate like a trampoline. By making the tethers longer and thinner, the drumhead is isolated and the heat that vibrates it has nowhere to run. “The only way out is through the open window,” as Alemán puts it. 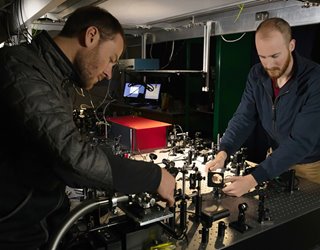 David Miller (left) and Andrew Blaikie helped develop a device that measures light using one-atom-thin graphene sensors. Photo: University of Oregon
“The game up to this point has essentially been all about increasing the resistance, and decreasing the heat capacity,” he said. “We used the smallest possible heat capacity—there’s no material that’s thinner than a single layer of an atom. No one will ever be able to get a lower heat capacity ever.” As a result, they’ve reached a sensitivity and speed—microseconds instead of milliseconds—long longed for in the field of bolometery.

What’s more, thanks to graphene’s incredible durability—and the fact that there are no electronics needed to measure the heat responsive drumhead—the sensor will likely work in environments in the thousands of degrees.

“We completely abandoned electronics and embraced mechanics,” Alemán said. “As a result we have obtained the ultimate limit in heat capacity—no one will ever surpass it.”


The applications for such a heat-resistant nanobolometer are multitudinous. Astrophysicists will have a new tool for looking at the sun, engineers can use the sensors in any engine to get a better image of things when they get hot. And thermal imaging will benefit immensely. “It’s a big deal because there are instances where a firefighter may want to put some thermal goggles on and look into a fire to find a body that’s still moving,” Alemán said. Conventional sensors wouldn’t survive the heat of the blaze. Graphene drumheads would.


Test Your Knowledge with this Quiz: What is Graphene?

The team cut out their drumheads with an ion beam. The process, and the materials, are relatively inexpensive, so the sensors have applications where cost is an issue. Airport scanners, for instance, are bulky, expensive, and require cooling. The graphene sensor combined with a terahertz source could make airport security much cheaper.

Though the sensors are already a great leap forward in the sphere of light sensing, there’s still room for improvement. “The lower the initial tension, the greater the response from light hitting it,” Blaikie said. “Figuring out how to manufacture these with lower tension would make them more sensitive than they already are.”

There’s also a possibility of exploiting the imperfections in a sheet of graphene to characterize the light that’s hitting it.

The sensor only needs money to become a commercial product. “We’re looking for research investment, but also completely open to talking to industry,” Alemán said. “This device is ready to go.”

Infographic: 6 Tips to Succeed in a Virtual Job Interview