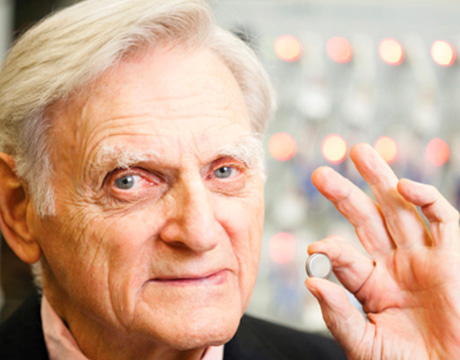 Goodenough Goes Back to Batteries

John Goodenough revolutionized battery power in the 1980s as co-inventor of the lithium ion battery. His work is a big part of many devices we use today: mobile phones, laptops, tablets, cordless power tools, electric cars, and more.

Today, he’s working with University of Texas research fellow Maria Helena Braga in work that could be an evolution of battery power for the 21st century.

Shatter the Glass Ceiling, with Glass

“She came to me with a possible glass addition for batteries,” Goodenough says of Braga, who is also a professor at the University of Porto, Portugal. “It became clear to me that, by working together, we could help get this to possibly be an alternative that was both safe and low-cost for the future. Think of electric cars—a fear is the flammable side a battery can have and it’s a barrier.”

With glass, he adds, they have shown you can plate lithium or sodium without forming dendrites. “A solid electrolyte that transforms ions as rapidly as a liquid means you don’t need the liquid and if you can plate, which you can’t do with the liquid, then you can get an anode which will give you bigger energy density,” he says.

Another plus on the automotive front is that this is an all solid-form battery and has also been found to operate as low as -30 degrees Celsius, which he says hasn’t been done before. “This could possibly work for cars in cold situations,” Goodenough says. “And it’s safe and works when it comes to high voltage, combined with fast charge discharge.”

The heat problem occurs in lithium ions because the ions require a certain amount of heat in order for lithium to move rapidly. “So the rate at which the lithium moves depends upon the temperature,” he explains.

Having done thousands of cycles of testing, Goodenough and Braga are now looking to partner with industry on their battery. He realizes that winning over the skeptics may take time.

“It’s safer, longer-lasting, and lower cost,” he says. “We’ve only developed small cells and they have to make large cells to scale up for what we’ve developed, which we think is promising.”

Looking back, Goodenough is amazed by how batteries have changed since he helped take on the lithium-ion battery more than 30 years ago and is excited by the possibility of continuing to further the cause of technology.

“It’s the creators of all these technologies that have been so much of the change,” he says. “But the battery work I was a part of did its part and I can feel good about that. We are a world that embraces technology in ways that couldn’t have been foreseen and it continues to move so fast. You just try to keep up.”

For Further Discussion
The battery work I was a part of did its part and I can feel good about that. We are a world that embraces technology in ways that couldn’t have been foreseen and it continues to move so fast.John Goodenough, co-inventor of the lithium-ion battery