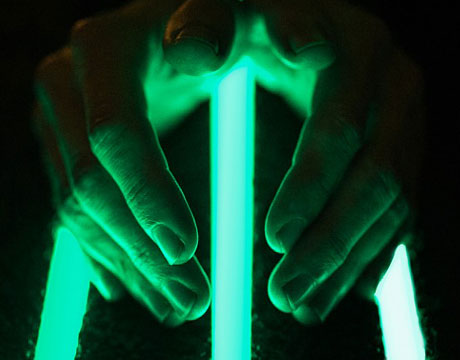 The glowing lines are part of a larger vision for smart highways in the Netherlands. Image: Studio Roosegaarde

Since the 1970s, kids have been climbing on top of the kitchen table, stretching tippy-toed to the overhead bulb, holding the pose for a minute while their Silly Putty absorbs enough energy, then hopping down, flicking off the light switch, and diving under the nearest covers to bathe in the eerie green glow. In the past 40-odd years, glow-in-the-dark materials have not had much purpose beyond this juvenile pleasure of holding a radiant toy in the dark.

But now phosphorescent materials have hit the street, paving the way for a future in which our travels at night will be lit by paints and polyurethane emitting the charge they received from the sun during the day.

The folks at Studio Roosegaarde in the Netherlands, for instance, used a glow-in-the-dark paint to line a ribbon of asphalt, highway N329, in Oss. Just what’s in that paint will remain unilluminated, however. “We don't give technical information about the Glowing Lines,” says project manager Jamaica den Heijer.

The secret formula, though, is still being tweaked, as rain and wear have dampened its shine in its first months of existence. And, while the lines were initially conceived as a way of adding an extra element of safety to a strip of roadway, it ended up having the opposite effect: some drivers have been turning off their lights to better experience the glow at the road’s edge. “The biggest challenge was changing the law,” says Charlotte de Mos, Studio Roosegaarde’s office manager. A Dutch law dictates that all road markings must be white, so the studio was required to warn drivers of the change. “The first pilot needed to include a sign that said ‘Watch out! Road markings missing.’ ”

Nissan wanted to do just that to market their electric Leaf. So they called Hamish Scott, founder of Pro-Teq and Nevana Designs, and he sprayed the car with his proprietary glow-in-the-dark polyurethane (the essential ingredient, strontium aluminate, is the same thing you’ll find in today’s glow-in-the-dark Silly Putty). Nissan knew of Scott’s product, thanks to his glow-in-the-dark Starpath, a luminous path in Cambridge’s Christ’s Pieces park that has survived weather, tires, and soles for five years without a loss in glowability.

“When we created our Starpath, people said ‘This is a nice gimmick,’ says Scott, “but we do this day in and day out for a living. This is not a gimmick, and if you think it’s a gimmick, then think again.” While the Leaf’s glow may be just a marketing tactic, there are many places where that same glow can save dollars and even lives.

“To be able to generate power from the sun to a path glowing at night—this is of real practical use to the world,” he says. “The applications are endless, anything you can think of, whether it’s your glasses, life jackets, life buoys, lifeboats, airplanes, yachts. If you tip a yacht up in the middle of the ocean it would be very easy to find. These are massive, massive benefits.” The most massive of those benefits may be long paths, like the Starpath, and even roadways, in countries without power.

Scott insists that the Leaf and the Starpath and his many other projects are far more stunning to the naked eye than they are in photos. Anyone hoping to get an eyeful should get in viewing distance of the Gumball 3000 Rally this year where, Scott says, “You might see a glowing car in amongst that lot, but it will be very interesting and the type of car will be very interesting as well.” And anyone who wants to have a glow-in-the-dark car of their own will find the coating reasonably priced, in the range of a specialized paint job.

According to Scott, his coating is invisible in the day and capable of glowing for ten to twelve hours at night (though the first hours will be the brightest). And his product “will never die,” he says. That is, it will keep glowing for more than 25 years. It’s capable of surviving temperatures as cool as -103 degrees F and as hot as 347 degrees F. In places where the tarmac starts to melt,like Dubai, the glowing polyurethane remains unaffected. And, in fact, countries from both the hottest climes and the coldest climes have contacted Scott about using his product.

For Further Discussion
To be able to generate power from the sun to a path glowing at night—this is of real practical use to the world.Hamish Scott, founder, Pro-Teq and Nevana Designs