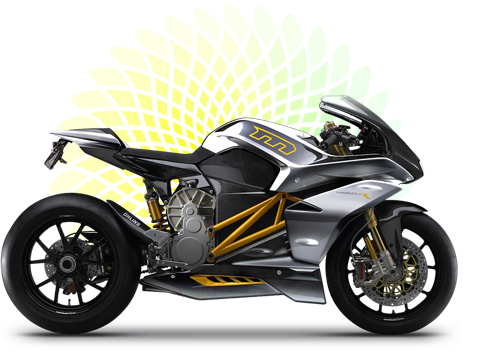 Get Your Electric Motor Running

When we think of electric transportation, thoughts quickly turn to Teslas, Leafs, and electric cars will be the wave of the future. But lost in the undertow may be the electric motorcycle—a two-word term many people have never even uttered. But with creations such as the Mission R Cycle and its speeds in excess of 150 mph, that may be changing.

Karl Johnson, mechanical engineer for Mission Motors , San Francisco, CA, explains how the electric motorcycle drivetrain works. “It’s battery pack, motor controller, which changes from DC to AC current, and that supplies the electric motor with the AC current. Those building blocks make up the energy storage and supply the force for acceleration. There are no moving parts besides the bearings. We don’t have any camshafts or a transmission, just direct drive, one gear. A single gear was a great simplification in terms of packaging.”

For the company, they shot for eye-opening speeds to, at the very least, overcome a myth. “It’s been put out there that electric lacks in performance,” he says. “It’s important to do everything you can to give people confidence.”

Just as impressive may be that it can go from 0-60 in less than three seconds. “A great part of electric vehicles is all of the torque from zero rpm,” he says. “You don’t have to slip in the clutch to get going, you’re not shifting, all that’s taken out for accessibility—even for people without a lot of experience.” According to the company website, the bike actually starts with 120 ft/lbs of torque.

In addition, it has a range of 100-150 miles. Johnson says they continue to work on improving it even though most sport bike riders go no longer than 60-100 miles per trip in his estimation.

Looking back, the biggest challenge in building the Mission R was actually in creating the battery pack. “Trying to get a defining balance between weight and energy and then fitting a battery pack into the vehicle in an ergonomic way was tough,” Johnson says. “You want to make sure the battery pack isn’t poking out where a rider’s knee should be. There is a fairly defined shape for the battery cell we use—it’s a thin rectangle—and we had to package those into modules and then package the modules into a battery pack.”

For the ergonomics, they went about things a little differently. “When it comes to ergonomics, many spend a lot of time doing preliminary work, sitting on it and feeling things out. Changing it by putting clay on and shaving it down, fine-tuning the shape. We instead went straight from a CAD model developed by the stylist Tim Prentice into molds for body work, and we assembled it. I think it’s the first time he did it without any clay and he was excited by how well it turned out. The riding position is an aggressive one so when you’re on track you can deal with nice twisties.”

In the future, they’re shooting for a more personal riding experience. “So many parameters can change how the vehicle performs and we’ve talked about having the person step up to the motorcycle, have it recognize you, and adjust to how you want to ride,” he says. “That would be fun!”

It’s been put out there that electric lacks in performance. It’s important to do everything you can to give people confidence.Karl Johnson, Mission Motors