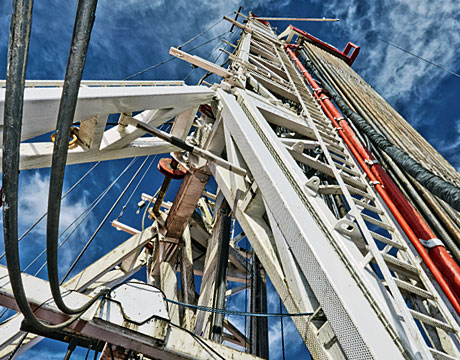 Hydraulic fracturing is a booming success story, the tool to collecting millions of barrels of oil and cubic feet of natural gas from seemingly untappable underground formations. Its practice has upset global markets and boosted U.S energy production to levels not seen in decades. But its future is not guaranteed. New York state officials have banned the practice, and others are investigating its potential to produce seismic events—earthquakes—and other associated environmental risks.

"Fracking," as it often is called, is a thirsty process, each well consuming between three million and six million gallons of water, most of which becomes unusable and must be trucked for disposal, generally in deep injection wells. Reducing the volume of water needed or reusing it could reduce the industrial footprint of a well, along with costs, potentially making it more palatable to critics. There are several research projects attempting to find cost-effective treatment methods, but at Ohio University’s Russ College of Engineering and Technology, one mechanical engineering professor is moving into the second stage of a research effort targeting the treatment and onsite reuse of fracking water.

Hydraulic fracturing uses water pumped into a well at very high pressure to shatter underground shale formations and release the hydrocarbons trapped within. Most of the water is recovered, but on its way back to the surface the backflow picks up the chemicals used in the fracking process along with high concentrations of salts, often in concentrations up to 192,000 parts per million. Seawater, for comparison, has a salinity of about 35,000 ppm. The salinity levels are too high to be reused in fracking, so the wastewater has to be trucked for disposal, generally in injection wells.

“There’s two types of water,” says Jason Trembly. “The flowback water is generally similar in chemistry to the fluid that stimulates the well. Most of that water can be reused after filtering out the solids. We are focused on the produced water that has been trapped within the shale seams. That takes on the characteristics of the shale itself.”

Trembly is developing a two-step process: The first uses off-the-shelf filtering technology to gather suspended solids coupled with ultraviolet water treatment to handle bacteria and water softening systems to remove hard water ions; The second puts the flow through a reactor fueled by field gas, under high pressure and high temperatures, where it is brought to a supercritical condition.

At the supercritical state, water takes on the properties of both liquid and gas. Salts and hydrocarbons either precipitate out as solids or gasify into hydrogen. The salts can be reclaimed for uses such as road de-icing and the hydrogen returned to help power the reactor.

“Supercriticality is nothing new,” Trembly acknowledges. “What’s different is the novel reactor design. It will have a small footprint and a high throughput.”

Trembly says he is working toward a commercial application of 100 gallons per minute with a reactor and associated equipment that can be fit onto a flatbed truck for mobile application. Colleagues at Ohio University’s Institute for Corrosion and Multiphase Technology are researching materials with which to build the reactor, taking into account high temperatures, pressure and the highly corrosive brine.

Trembly says the project was spurred in part by local needs. Although there are not any wells being fracked in southeast Ohio’s Athens County, where the university is located, he notes there are many injection wells being used to dispose fracking wastewater. “I want to focus my research in areas where both industry and societal needs overlap,” he says.

Elswehere, Massachusetts Institute of Technology researchers believe electrodialysis shows promise in accomplishing the same goal. The process isn’t new, developed over 50 years ago to desalinate brackish water or seawater, or for food processing and other uses. But it has not been used with waters of such high salinity, according the researchers.

The team found electrodialysis actually works better with higher salt concentrations because water conducts electricity better at higher concentrations. By desalinating the water in stages and to levels that fall short of potable standards but enough to be reused for fracking, they believe electrodialysis has the potential to reduce costs and minimize disposal of contaminated water. Engineers still must determine the most effective level of salinity for fracking, say the researchers.

Some private firms are attacking the problem from another direction, developing waterless fracturing technology. Calgary-based GasFrac is working in drought-ridden Texas using a system that substitutes propane for water. The closed-loop system sends propane gel into the formations along with proppant, small sand particles that are forced into cracks to hold them open so gas can flow out. The gel reverts to vapor within the underground formation and returns to the surface along with the natural gas. Although initial capital costs are higher and there are increased risks for explosion, the company says drilling chemicals remain below ground and operators can recover up to 25% more product.

Chevron reportedly is testing the company’s process at five natural gas wells in Colorado. In Ohio, one driller is now using it in an attempt to recover oil in the Utica formation. Hydraulic fracturing for oil has had limited success in the Utica where water is retained underground, swelling the formation and blocking water and oil recovery.

For Further Discussion
Supercriticality is nothing new. What’s different is the novel reactor design. It will have a small footprint and a high throughput.Prof. Jason Trembley, Ohio University