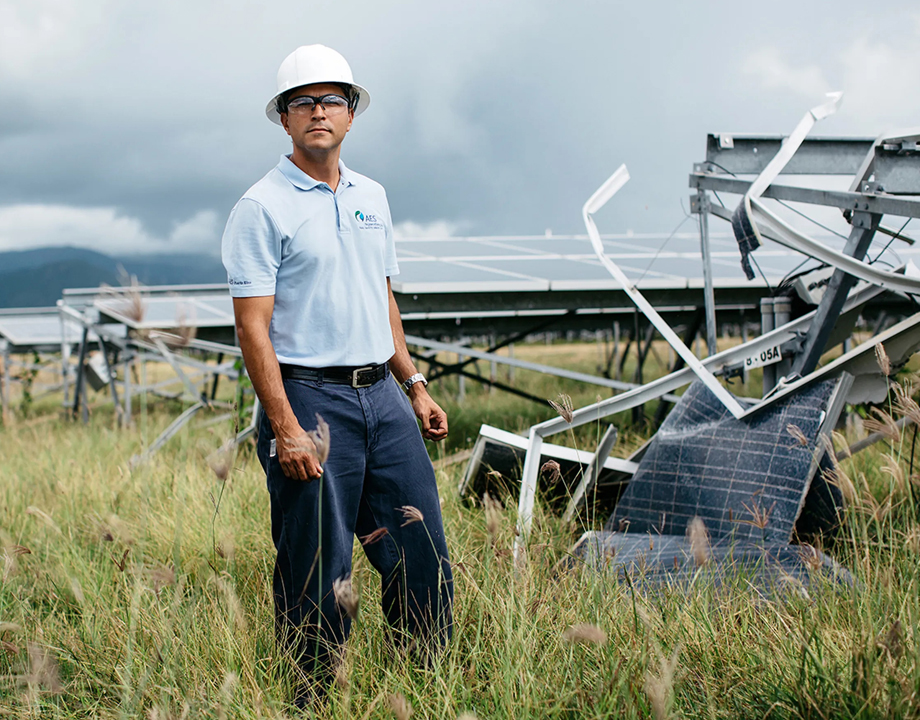 Energy Energy and Utilities
Collection:
Energy Transformation Collection
In September 2022, Hurricane Fiona battered Puerto Rico, knocking out power to nearly half the island’s 3.3 million residents. It could not have happened at a worse time as the island was still recovering from energy outages and ruined infrastructure left in the wake of Hurricanes Irma and Maria in 2017.

In response, DOE’s national laboratories are helping build a more resilient grid in general and outlining a program to help transition to renewables. The initial renewables study is called “Puerto Rico Grid Resilience and Transitions to 100 percent Renewable Energy Study,” or PR100.

Listen to Our Podcast: Building Infrastructure for Offshore Wind Power

As part of that work, Thomaz Carvalhaes at the Oak Ridge National Laboratory brings together his skills in remote sensing and data analytics with his background in combining an area’s technological and social environments. He uses data from all these perspectives to understand how technology impacts the lives of people.

Both the infrastructure and the people who use it need to be understood to help in rebuilding a resilient energy grid, said Carvalhaes, a research and development associate at ORNL.

“Where both systems interact, trade-offs and failures can cascade between both sides,” he said.

For instance, about 2,000 families each month add rooftop solar to their homes at their own expense, according to Tom Sanzillo, director of financial analysis at the Institute for Energy Economics and Financial Analysis. This is due to the high cost of electricity, which is a result of a number of factors, including the bankruptcy of the government-run Puerto Rico Electric Power Authority in 2021.

Puerto Ricans spend around 8 percent of their income on electricity, compared with the 2.4 percent the average citizen on the U.S. mainland spends, according to the Institute for Energy Economics and Financial Analysis.

This type of information is vital to Carvalhaes’ work. For the PR100 project, Carvalhaes is mapping the energy burden and social vulnerability of future infrastructure scenarios.

Energy burden looks at consumers’ access to energy and its cost. If community members can’t afford the increased cost of energy after an upgrade—such as a switch to renewables--then the upgrade is not the best option, he said.

“You don’t want to come up with a really resilient technological system, but then some folks are disproportionately facing greater burdens or risks,” Carvalhaes said.

In his PR100 research, he draws on the skills he honed for an earlier project, which looked at the aftermath of Hurricane Maria. For that, Carvalhaes built a way to look at natural disaster data to understand infrastructure vulnerabilities as well as impact on residents.

Synthesizing ethnographic and geospatial methods, he and his team built a “thick” dataset, a collection of many data points about one place. They then developed an app that turned the data into layers of maps, called thick mapping. Researchers could interact with the layers to see a more complete story of the aftermath of Hurricane Maria, Carvalhaes said.

“Thick mapping is mapping one place from many different perspectives,” said Carvalhaes. “I tried to bring the technocentric and human-centric perspectives together using geography.”

More for You: How Food Webs May Improv Electric Grids

Also as part of the DOE’s Puerto Rican grid resiliency efforts, researchers at the Pacific Northwest National Laboratory have created the Electrical Grid Resilience and Assessment System (EGRASS), a platform that helps officials prepare and fortify critical structures in the face of threats such as extreme weather.

The software will help the island be better prepared with proper action plans and materials when facing big storms in the future, said Marcelo Elizondo, a PNNL power systems engineer.

The system is able to estimate the probability of failure for different components of the grid, including towers, transmission lines and substations. It analyzes the associated risk and impact of their failures on system reliability. It also aids in real-time recovery operations by providing a way for experts to find alternative power sources, said Jeff Dagle, PNNL chief electrical engineer.

“We recognized a gap in our tools as we worked to rebuild the grid after the effects of Hurricane Maria,” Dagle said. “We wanted to add information like which power lines would go down to gain a better understanding of the fragility of the towers and their susceptibility to substations and to the individual components of the power system.”

Work like this—and other projects at national laboratories—should help Puerto Rico build an electrical grid that can face down the next hurricane and that can depend wholly on renewable energy in the not-too-distant future, Dagle said.