Flying Robots to the Rescue

Flying Robots to the Rescue 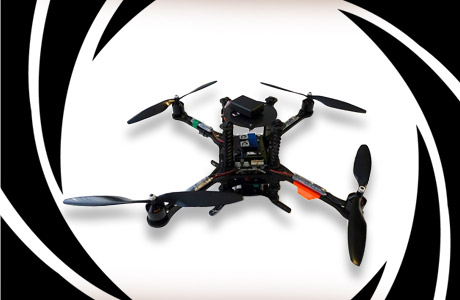 From vacuuming floors, building cars, performing surgery, carrying out underwater expeditions, to exploring outer space, we have seen robots perform mundane to complex functions in the last few decades. Now a team at the University of Pennsylvania's GRASP Laboratory is designing autonomous robots that can fly in swarms to do tasks that are too dangerous to be performed by humans, such as "first response" after natural disasters and search-and-rescue missions.

"Our goal is to develop robots that immediately respond to natural disasters or 911 calls. For instance, the robots can collect critical information before humans arrive at the disaster scene, and allow them to operate safely," says Dr. Vijay Kumar, UPS Foundation Professor and the Deputy Dean for Education in the School of Engineering and Applied Science at Penn. Dr. Kumar and his students, Alex Kushleyev and Daniel Mellinger, have designed the nano-quadrotors or "flying robots" that were recently seen performing the James Bond Theme song on musical instruments at the TED Conference. "Today, you could imagine these robots working inside the nuclear reactor at Fukushima in Japan and providing information to humans outside the building," says Dr. Kumar.

The nano-quadrotors are autonomous robots that can operate in 3-D environments and fly over and around obstacles. Remote-controlled quadrotor robots have been around for some time but the Penn team has enhanced the technology further over the past few years by making these robots smaller and smaller. "Compared to unmanned aerial vehicles that are remotely piloted and weigh a few hundred pounds, these robots are completely autonomous, small (a foot in scale, a fifth of a pound), and agile," says Dr. Kumar.

Group formations, however, are unique to nano-quadrotors and a first for Penn (see a video of robots flying in a formation). The nano-quadrotors don't carry their own sensors and rely on off-board sensors that enable the robots to figure out where they are in the environment. "If you want multiple robots to operate together, each robot must have the basic intelligence that allows it to cooperate with other robots. The cooperation in its simplest form allows the flight," explains Dr. Kumar. "In this case, the robots are cooperating by simply reacting to each other's positions to ensure safe flight. Robots know they have to move quickly through a 3-D environment and they adjust their position to ensure they don't collide with the environment or their neighbors," he adds.

The Penn team has been simulating and testing the formations in a laboratory environment. "If you have a small number, for example 5-10, it's possible to have a central computer controlling each one of these robots. The number of variables that you have to model increases linearly with the number of robots, which is not hard to manage," says Dr. Kumar. "What's harder to manage," he adds, "is the number of interactions between robots that grow as the square of the number of robots. When you go from 5 to 10 to maybe 100 or 500, the square grows pretty rapidly and that increases the complexity pretty significantly."

Scaling Up in the Future

The scientific challenge, he says, comes in two flavors. The first is the challenge of controlling one robot. "If you look at one robot, it has four rotors but it has six degrees of freedom—there are three translations and three rotations. What you are trying to do is control six different things with only four motors. Such systems are called under-actuated and to have these systems perform these maneuvers is very hard. The key challenge is, therefore, to do more with less."

The second challenge, explains Dr. Kumar, is to control more and more of these robots. "For that you have to think of an architecture that can be translated into local rules. If you don't have local rules and you rely on global rules, then it becomes harder and harder to control the robots as the complexity grows as the square of the number of robots." The Penn team has worked with 1,000 robots in simulations and plans to push the central paradigm further.

Kuschleyev and Mellinger are already working toward scaling the technology in future. They have formed a company called KMel Robotics and are now devising strategies for scaling up the flying robots that Dr. Kumar hopes someday might play a crucial role in search and rescue missions.

Listen to a podcast with Dr. Vijay Kumar.

If you want multiple robots to operate together, each robot must have the basic intelligence that allows it to cooperate with other robots. The cooperation in its simplest form allows the flight.Dr. Vijay Kumar, UPS Foundation Professor and the Deputy Dean for Education, School of Engineering and Applied Science, University of Pennsylvania