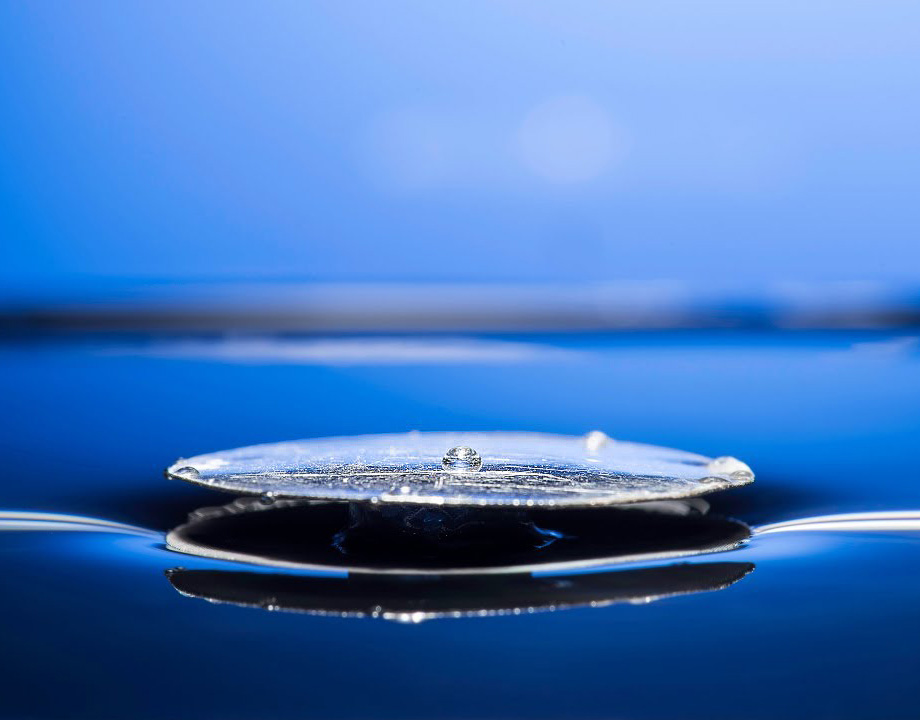 Make a wish as you chuck a coin in a fountain and—whatever happens to your wish—there’s one sure outcome: The coin will sink. It doesn’t take an engineering degree to know that metal doesn’t have much in the way of buoyancy.

But now researchers out of the University of Rochester have done the seemingly impossible. They’ve made metal that floats. Their metallic plates pop to the surface, as quickly and as buoyant as kick-boards at the pool, regardless of how long or how deep they’ve been submerged.

The key to the trick is borrowed from that ever inspirational font, life on Earth. “Diving bell spiders live their entire lives underwater,” said Chunlei Guo, a professor of optics and physics at the university’s Institute of Optics. “But they still need to breathe air—they are not fish.” 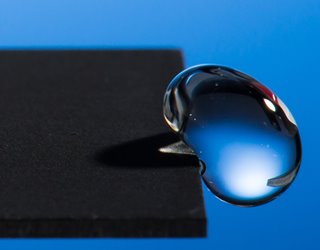 The work is based on air bubbles ants and spiders use to float on water. Image: University of Rochester
To do so, the spider creates a dome-shaped web, then stuffs it with air it’s collected between hydrophobic hairs that line its body. It can then take a pocket of air with it below the water’s surface. Similarly, fire ants can join together and float as a kind of living raft. The ants have a water-repellant exterior that allows them to trap air bubbles beneath them, an effect that is enhanced when they cling to each other en masse. The researchers thought that if they could create a metal with a similarly hydrophobic surface, perhaps it too could carry an air-bubble.

Guo and his colleagues have a history of creating hydrophilic and hydrophobic surfaces on metal. The technique they’ve developed is to etch patterns on to metal using femtosecond (one-quadrillionth of a second) bursts from a laser. The result is a nanoscale set of ridges—like corduroy for a flea—off of which water literally bounces off.

You May Also Like: Adding Super Powers to Wearable Smart Devices

By itself, though, such an etched sheet of metal would still sink. So Guo created a kind of spool with two etched disks separated by a small plastic post. The etched, hydrophobic faces of the disks face each other several millimeters apart.

The space between the disks is open, but the interior surfaces are not just hydrophobic, but superhydrophobic. Water just can’t stand to be next to them and, despite the millimeters long gap, eschews the space between disks. The result is an air sandwich that stays afloat. The gap distance can be changed to create different levels of buoyancy.

“We can find the critical distance and make it stationary in the water so it doesn’t go up or down,” said Guo. “By tuning the trap, we can put it anywhere in the water, make it stay there, make it sink, or make it really really pop up to the surface.”

The material is likely to have applications in just about anything that’s meant to see water. Vessels of all kinds, of course, will have a greater chance of avoiding the bottom of the sea. “Now we can really make an unsinkable ship,” said Guo.

Architects and engineers working on floating cities may likely turn to the etched metal for every component of their waterborne metropolises. Electronics that are better kept atop a body of water’s surface would benefit as would scientists hoping to use floating sensors that stay at specific depths.

The biggest holdup to creating a world of unsinkable metal is the cost. “In my lab it is a little bit expensive right now,” said Guo. “But we have already demonstrated the feasibility of scaling the technology. With the ever increasing advancements of laser processing, I don’t think it will be prohibitively expensive—on par with a high-quality paint.”

Pperhaps some day the person whose job it is to collect coins from fountains will merely have to skim them off the surface.