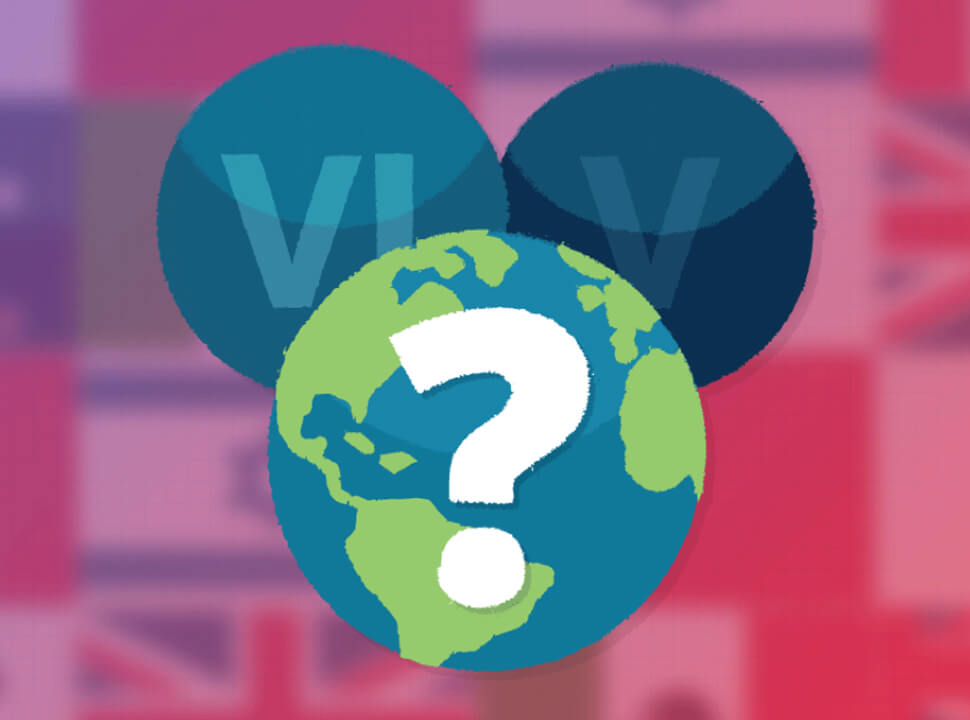 Learn about the current state of efficiency regulations by looking at external power supplies (EPS) standards around the world.

External Power Supply Efficiency Regulations Outside the U.S. and E.U.

It is widely recognized that the losses caused by inefficiencies in external power supplies (EPS), such as adapters, are a significant contributor to energy use globally, with a corresponding negative environmental impact. In an effort to curtail those inefficiencies, several regulation agencies around the world have released EPS standards to help designers be more efficient. Let’s explore the journey of these standards through the last 20 years.

The California Energy Commission was one of the first regulation agencies to release an EPS standard back in 2004, with mandatory standards for efficiency and no-load power draw, followed by the European Union. Over the years, the US and EU standards went in and out of step with updates, but presently there is substantial agreement between the current US Department of Energy (DOE) Level VI and the recently published mandatory EU Ecodesign Directive 2019/1782 for energy-related products (ErP). Outside of the US and EU, countries with significant EPS markets have adopted voluntary and sometimes mandatory programs, generally harmonized with the US and EU standards. Other countries such as China and Japan have published their own requirements.

For example, Canada has kept up with the US and DOE Level VI performance requirements through the National Resources Canada agency. These measures have been mandatory since 2017, although some provinces such as Ontario and Quebec have their own additional requirements. 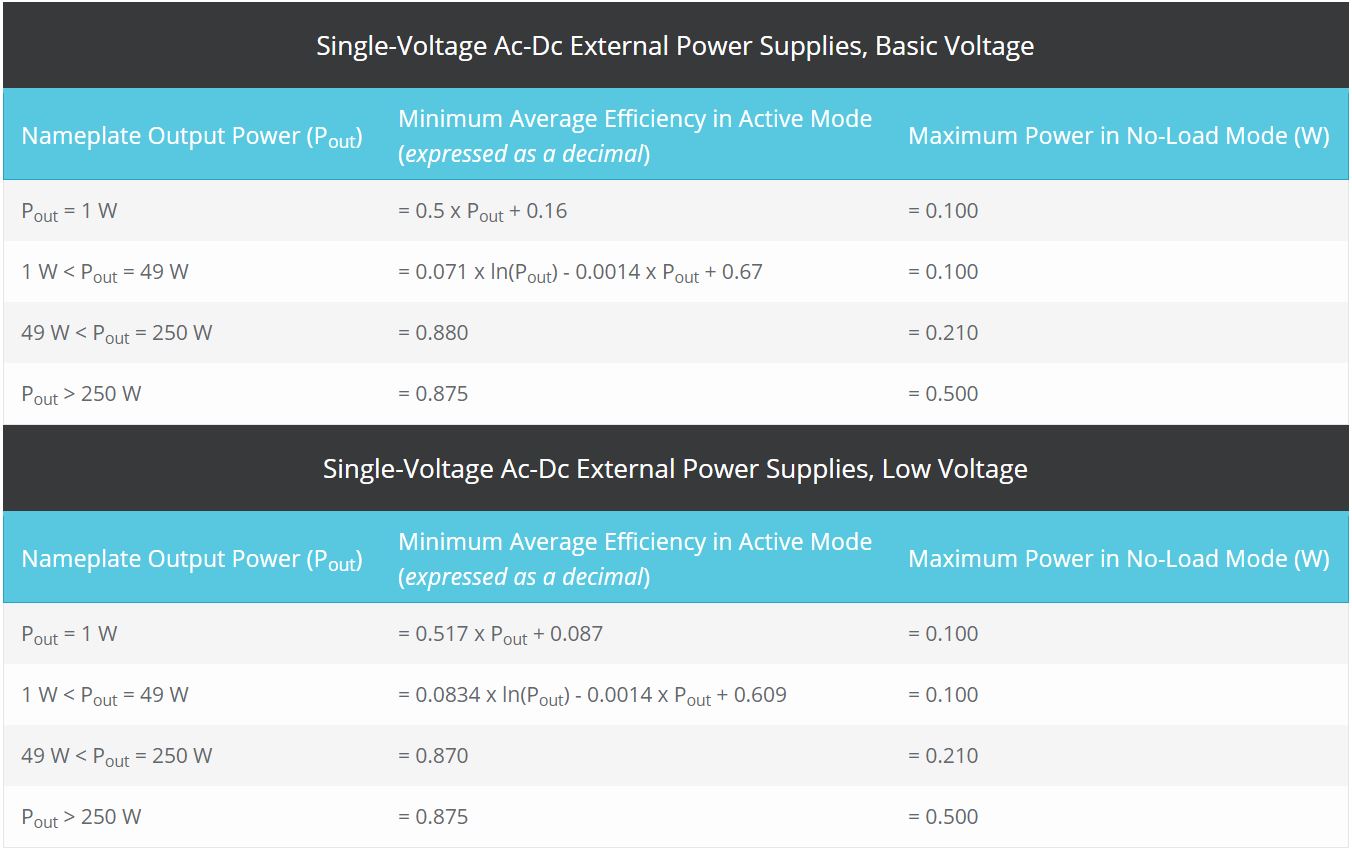 An excerpt of DOE Level VI efficiency and no-load loss limits widely used in other countries. Image: CUI Inc.
Australia and New Zealand, with their standard AS-NZS 4665.2-2005, made compliance with DOE Level III (Energy Star Version 1.1) mandatory in 2008 as a minimum and Level IV voluntary for high-efficiency products. In 2012, the Greenhouse and Energy Minimum Performance Standards (GEMS) Act came into force, consolidating state and territory laws, mandating Minimum Energy Performance Standards (MEPS) for a range of products. The AS-NZS standard is referenced with efficiency and no-load values largely equivalent to the DOE’s various levels. The minimum performance required is still Level III. Israel has similar arrangements with its standard, SI 4665-2.

Another large market, Korea, has mandatory requirements for compliance with DOE Level III for energy efficiency. The Korean E-Standby program to reduce standby losses to less than 1 W in EPS products was voluntary in 2007 and mandatory to be less than 0.5 W from 2010, after a transition period. Labeling is an important part of Korean programs to improve efficiency, with the country “naming and shaming” with a mandatory warning label on products that failed to meet the voluntary limits.

In China, requirements are stated in standard GB 20943-2013 and energy conservation rule CQC31-461236-2014, which is currently equivalent to DOE Level IV specified for ac-dc and ac-ac outputs less than 36 V. 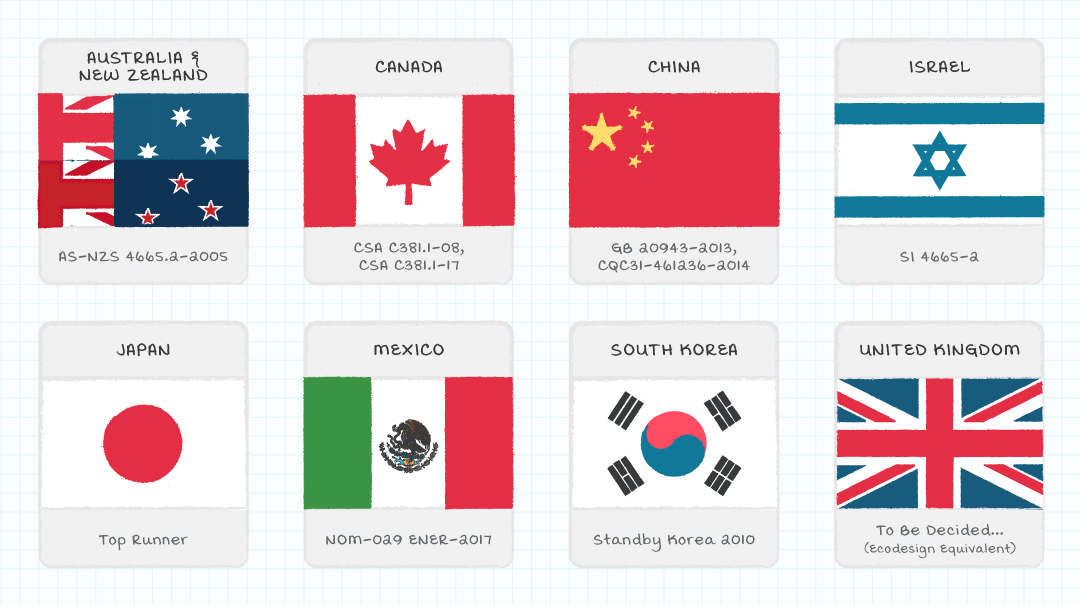 Different EPS standards around the world. Photo: CUI Inc.
Japan pre-dated the US in starting a national energy-saving program called Top Runner in 1998, with significant success in imposing mandatory requirements across a wide range of products. The principle was to identify the most energy-efficient product on the market in a particular category and designate it as the Top Runner, a “gold standard” for other manufacturers to follow. External power supplies, however, are not distinguished as a product category. As the world’s fifth-largest electricity user, Japan is very conscious of its environmental impact and has set itself tough targets for emissions reduction (80% by 2050).

Other countries have their own standards that mostly follow the DOE or EU requirements, such as in Mexico, where NOM-029 ENER-2017 applies for separately sold ac-dc EPS products up to 250 W.

Large markets such as Russia and India have no evident programs directly related to external power supplies. However, the Bureau of Energy Efficiency in India collaborates with major economies such as the US, China, and Russia on energy-related policies at a high level. India is also a participant in the Paris-based International Partnership for Energy Efficiency Cooperation (IPEEC), promoting global energy-saving initiatives such as SEAD, the Super-Efficient Equipment and Appliance Deployment initiative. SEAD has schemes such as the Global Efficiency Medal, similar to the Japan Top Runner, which identifies and rewards best-performing products in various categories, but again, not specifically EPS.

You May Also Like: How the Food Web Can Keep the Electricity Flowing

A new single market that comes into existence on January 1, 2021, is the UK after Brexit—its split with the EU. The UK government has confirmed its commitment to maintain the EU Ecodesign Directive standards with equivalent UK legislation and perhaps even tighten the regulations in the future.

For more information on this new standard, visit CUI.com.