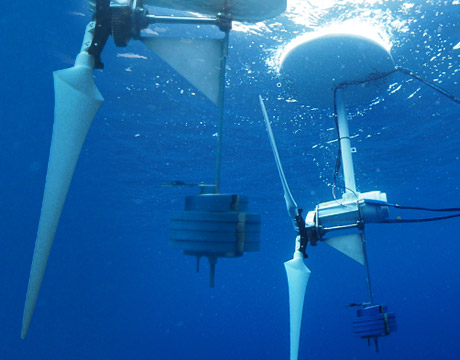 Wind turbines and solar power dominate renewable energy’s drive to further the mix of fuel sources for electricity production. Along the coasts, a smattering of wave and tidal power projects progress, but the ocean is mostly a stage for wind turbines, placed on platforms founded to the seabed or, increasingly, floating structures in deeper water. But researchers continue to go deeper, perhaps where no one—or at least few—have gone before. In Japan, a team of engineers is developing a submerged turbine with a design drawn from Star Trek’s starship Enterprise to produce power from ocean currents in depths of 100 meters or more.

Researchers modified a 1-kW wind turbine for the project, aiming to tap the energy of the Kuroshio Current, a strong and steady current that flows in the western North Pacific Ocean near the Japanese coast. At 100 kilometers wide and 500 meters deep, it produces a constant flow speed of 1-1.5 meters per second. At first look that seems slow. But because the density of water is 800 times greater than air, an equivalent power density as windflow of 10-15 meters per second, a team led by the Quantum Wave Microscopy Unit of Okinawa Institute of Science and Technology Graduate University believes it is suited for generating electricity.

In a paper published in Renewable Energy, Dr. Katsutoshi Shirasawa and three other authors point to the current’s stability, availability, and predictability, along with the lack of visual impact from a submersed turbine, as huge advantages for power production. If operating at depths of 100 meters, Shirasawa points out the turbine would not be affected by wave interference. They note other forms of renewable energy are intermittent because of day-night cycles affecting solar power or fluctuating wind speeds for wind turbines.

Most submersed turbines working to capture kinetic energy from ocean currents now capture tidal flow using horizontal-axis turbines mounted on the seabed. Ocean-current development relies on a floating machine moored to the seabed, which introduces the problem of cancelling rotor torque. Typically, developers look to a twin turbine system to solve the torque problem, notes Shirasawa, where each rotor must be controlled to maintain balance between torque and thrust.

QWMU’s design differs, using a spherical float at the top of the machine and a counterweight below, mimicking the Enterprise. Those elements allow buoyancy and gravitational force to act together and keep the machine right, and separates power generation from stabilization. The overall design was first sketched out by QWMU founder Prof. Tsumoru Shintake, based on the Enterprise. “It was designed like a spaceship,” says Shirasawa, although the team also describes it as a hybrid of a kite and wind turbine.

Shirasawa says the turbine’s nacelle containing a generator, drive train and gear box is connected to a float, whose spheroid shape was chosen because it reduces drag. A counterweight hangs from a stainless steel rod connected to the nacelle. While Enterprise reached warp speed using dilithium crystals, the marine turbine’s rotors may have a tip speed lower than 30 kilometers per hour while the machine stays in place.

Shintake, a co-author of the paper describing the turbine experiments, began investigating submersible turbines shortly after the 2011 tsunami that heavily damaged the Fukushima nuclear power complex. When Japan reassessed its nuclear power program, Shintake felt the time was ripe to begin investing in renewable energy, and believes the Kuroshio Current eventually can site a marine turbine farm generating up to 1 GW of power from some 300 turbines. Since the disaster, utilities and developers are moving on the installation of the first floating wind turbines off of Fukushima.

Submersibles are a bit farther behind. The experimental Okinawa machine has a 2-meter-diameter, 3-blade rotor, originally of carbon fiber-reinforced plastic. Because there is much more drag in water than in air, the blades of the converted wind turbine were reinforced by filling them with resin. A metal shaft also was added in the spar direction. And because turbine rotation slows in water, researchers added a step-up gear to increase rotation speed.

To investigate viability, the team tested the turbine at sea using a fishing boat to tow the turbine two meters below the surface. Besides the tow rope, an output cable from the generator was connected to a resistive load on the boat. Shirasawa says the results verified the design, but precise measurements were difficult to obtain because of surface waves and small currents in the towing field. The team confirmed the turbine’s viability and solidified measurements by towing the machine within a laboratory tank.

Eventually, Shintake envisions marine turbines with 80-meter-long rotors placed throughout the Kuoshio Current and generating up 1 GW of power. But the next step is a pilot project, possibly using a 10-kW unit. “A 5-meter-diameter rotor generates 10 kW at current speed of 1.5 meters per second,” says Shirasawa. He envisions the nacelle, float and counterweight of a newly designed marine turbine to be fabricated from steel and the rotor blades from glass or carbon-fiber-reinforced plastic or a combination with steel.

He says the team is targeting development of a machine with a 30-year life, “But we understand that is impossible with today’s marine technology. But to realize a cost-competitive device, turbine lifetime is very important.”

For Further Discussion
Shintake envisions marine turbines with 80-meter-long rotors placed throughout the Kuroshio Current and generating up 1 GW of power. But the next step is a pilot project, possibly using a 10-kW unit.