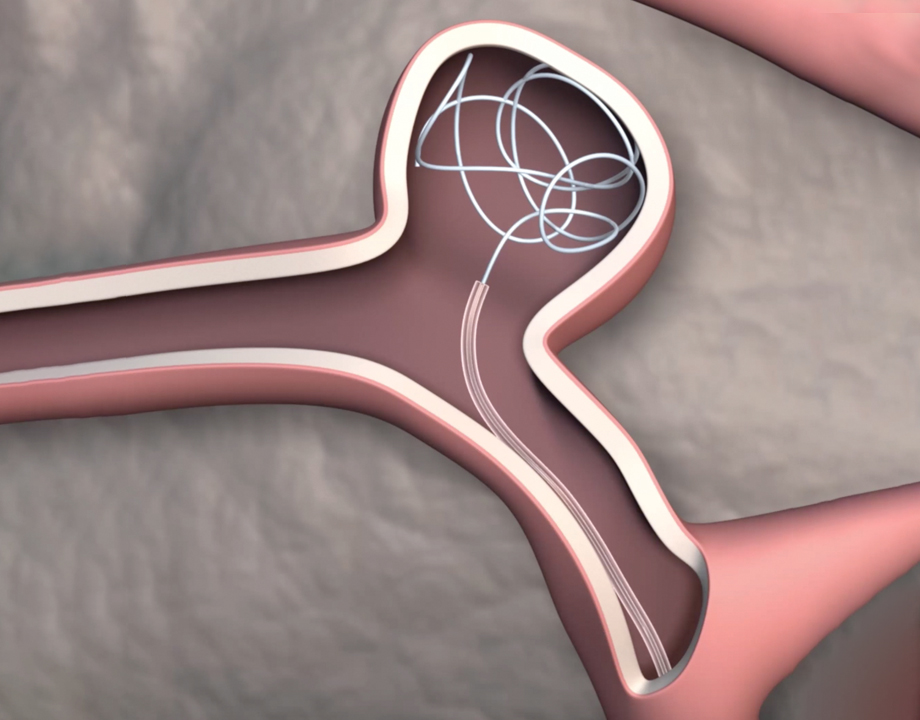 Entry to the Brain

Medical experts estimate there are 160 million people around the world with an unruptured intracranial aneurysm. When it breaks, more than half of those people die. The situation is frustrating for surgeons because the location of those blister-like lesions are in arteries too thin and too difficult to reach.

That may change with the development of a steerable, hydraulically actuated catheter that is thin enough to reach those small arteries. The design was inspired by flagella that allow microscopic organisms to swim but required University of California, San Diego, researchers to devise a novel technique to produce it.

“We ran into a lot of fabrication problems that nobody could really help us with and so we had to reinvent the wheel,” said James Friend, a mechanical engineering professor and principal investigator of the school’s Medically Advanced Devices Laboratory. 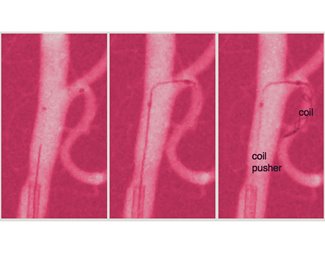 Fluoroscope image show catheter navigating brain artery in pig and deploying coils. Photo: University of California, San Diego
The challenge was in devising a device small enough to get into some of the smallest arteries in the brain, less than one millimeter in diameter, and with a length approaching five feet. For neurosurgery, existing curve-tip catheters rely on guidewires to move a catheter through the heart and to the brain.
But the guidewire must be removed before the catheter’s tip can be used. When that happens, the catheter shrinks in shape, making it difficult for a surgeon to place platinum coils that block blood flow.

Gopesh Tilvawala, who earned his Ph.D. in Friend’s research group and led the research into the project, said the device’s very small size prevented the team from 3D printing the device that now has been successfully tested in pigs.

“We had to figure out what are the things available out there that are at these precise dimensions and lens skills we need,” he said. “Even though the hydraulic channels are 50 micrometers in diameter, we need a length of at least 20 millimeters.”

More for You: Bioengineering Blog: Working Toward a Kidney Solution

After much research, Tilvawala said they found a firm to produce a rigid structure in which to develop the device. They also engineered custom polymers needed to accommodate varying degrees of stiffness in the structure.

Iterative design and trial and error produced a new way of casting silicone in three dimensions, depositing concentric layers of the material on top of another, along with determining how much hydraulic pressure is needed for guidance. “We were able to put a microstructure together in which we can then inject the silicone rubber at a very precise read, and control the temperature and pressure.”

The catheter’s tip is visible on X-rays. To guide it, a surgeon holds and compresses a handheld controller that passes saline into the tip. Saline is harmless should be device break and spill solution into the bloodstream.

Editor's Pick: Bioengineering Blog: using Technology to Give Speech to the Speechless

Tilvawala said the team worked very closely with doctors and clinicians to define the tasks. “Can you define what is a difficult aneurism to treat? That area has never been quantified in surgery, so it is a subjective area of expertise as well.”

Friend and Tilvawala said the next step is to perform a significant number of animal trials.