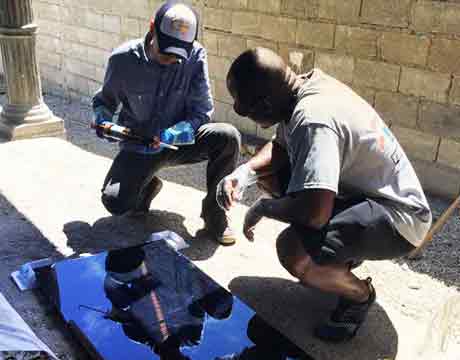 Even before they graduate, engineering students at Georgia Tech have started to bring much-needed, inexpensive, and reliable solar power to a small remote village of about 6,000 in Haiti, devastated by the 2010 earthquake.

Students say projects like these are not only great learning experiences, they are also very rewarding, as they know they are helping make people’s lives better in addition to making themselves feel like real practicing engineers.

The village, called Thoman, a three-hour drive east of Port-au-Prince, is being developed as a sustainable community by a Mississippi-based nonprofit ministry. The people still live in primitive housing and have no electricity or running water. Only last year did Thoman get connected to Haiti’s main power grid, but service is so unreliable that a recently opened health center relies mostly on a diesel generator that is expensive to operate.

Living conditions are so poor that one team member, Edlawit (Julie) Bezabih, originally from Ethiopia, said, “Haiti is different. I had never experienced [conditions] like I saw in Haiti. I am from Ethiopia, obviously from Africa, so most of these things are not new for me.”

The system includes a 7.2-kW photovoltaic array and a battery bank to replace the diesel generator in everyday operations. The team chose this system over other power-generating units after evaluating options, based on technical and economic criteria, such as daily energy production and maximum annual capacity shortage, as well as ease of use and ability to obtain replacement components when needed.

The other, smaller team of five students, guided by Ph.D. mentor Liyao Wu, developed and installed a smaller solar-powered system that provides LED light, replacing kerosene lamps for single family houses and phone charging so that residents don’t have to travel miles to find a power source. When this team started its project a year ago, they knew their work was destined for Haiti eventually but had no idea when, so they didn’t expect to see the final results. Several months later when they learned they would go to Haiti the next spring to do the installation themselves, that gave them even more inspiration to “design the very best project for the Haitian people,” Bezabih says.

The team spent the first several months learning about power electronics circuits, doing simulations, and talking about different designs. By February, they had a system they thought would work, consisting of a controller board that interfaced with the solar roof panels to charge LED lights and phones via USB ports.

Then testing began. One of the first issues the team faced was a circuit board that blew out around noon when radiation and voltage are very high. Under the guidance of Wu, the team employed a voltage regulator to take it down so that the circuit board worked perfectly.

Even bigger challenges arose after they arrived in Thoman. They did not know ahead of time what type of houses they would be working on, and the team realized it had to create a new mount for the solar panels to be positioned for maximum sun exposure. The installation kit they brought wasn’t useful, and they learned that only two team members were light enough to work on the weak rooftops. “We had to drill and do everything ourselves,” Bezabih says.

When they needed guidance and troubleshooting, they called for help from someone on the health care center team, who had previous experience installing solar panels. That first installation took two days, the second one, only five or six hours.

Although what happens next is not set yet, Wu is ready to hand off the project to a new graduate student to work with the next team because he will be focusing on his Ph.D thesis, and most, if not all, of the other team members are graduating. But Wu has laid out ideas for what could come next.

“The design is not yet optimized,” Wu says. “What we have is a working prototype that provides power to the customer, but the board is large and bulky. We should be able by more careful design to shrink the size and make it lighter and still give the same or better performance.”

The system currently is charged via a power bank during the day, but he would like to see a battery incorporated so that it will automatically get charged during the day. “We weren’t able to do that before because of time constraints,” he says.

An added benefit that the researchers hope can happen is that the teams can teach the Haitians how to build and install the systems themselves, providing much needed employment opportunities where none exist today.

Wu hopes one day he can get back to projects that offer help to people in need. “Our project helped two families, and there are hundreds there,” he says. “I hope that more can be installed in more homes and that they can be more functional, not just for cell phones and lighting but to power more complex functions; maybe pump water and other things they need electricity to do. They have a very long way to go.”

Nancy S. Giges is an independent writer. Learn about the latest energy solutions at ASME’sPower & Energy Conference and Exhibition.

Our project helped two families, and there are hundreds there. I hope that more can be installed in more homes and that they can be more functional.Liyao Wu, Ph.D. student, Georgia Tech