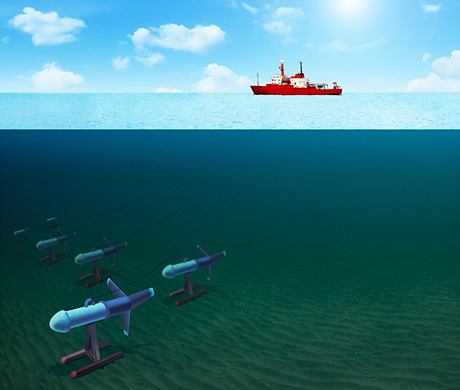 Rendering of experimental turbines that Florida Atlantic University is developing.

Even though Florida's ocean currents are favorable for producing hydrokinetic power, no one has demonstrated commercial viability or deployed permanent turbine arrays off the Florida coast. The required systems are expensive to build, install, and maintain, and they require environmental impact assessments before implementation.

The fastest currents occur near the surface, but deploying energy conversion systems there would interfere with busy commercial shipping lanes. At 50 meters, which is below the draft of ships, the average current speed is about 1.5 meters per second with a power density of 1,700 Watts per square meter, the equivalent of 14-meter-per-second winds. With maximum speeds equivalent to tropical-storm strength winds, a speed histogram skewed toward the high end, and constant large currents like the Florida Current, there is much potential to generate high amounts of electric power.

In a paper presented at the 2012 OMAE conference in Rio de Janeiro, Ph.D. student Alana Duerr, who recently graduated, and Dr. Manhar Dhanak in FAU's Department of Ocean and Mechanical Engineering, describe how they assessed the potential of the Florida Current. They used a computer ocean model and observations over two years of speed and current direction from Acoustic Doppler Current Profilers. Based on their analysis, they have developed a procedure to identify ideal turbine locations for arrays to extract hydrokinetic energy, and estimate the amount of power that could be extracted.

"People typically use similar procedures, based on predictions of computer ocean models, to assess resources for other forms of ocean energy, such as ocean thermal energy, involving exploitation of the temperature difference between the warmer surface waters and cooler waters in deep waters," says Dhanak.

The Florida Current mainly flows northward and the ocean floor can be up to 800 meters deep. Current speeds vary with depth, as well as season, spatial locations, latitude, and the amount of turbulence. Currents in the coastal areas may also reverse direction at different times of day. Duerr has created a method that estimates the hydrokinetic power resources which vary over time with the variation in current speed seasonally and with location. In general, the average maximum available power resource across a given latitude in the Straits of Florida ranges from 5,000 to 20,000 MW. Locations with high variability are typically less preferable for turbine installation.

The research identified ideal turbine locations within the Current's "core," a region with the highest current speeds and therefore significant amounts of power to harvest. The core hugs the shoreline in some areas and is located further offshore in others. It occurs at various depths, ranging from the surface to several hundred meters below.

Regions that contain both high hydrokinetic power and high power densities, two factors not necessarily well correlated along Florida's coast, define the core boundaries in terms of distance from the shore. After identifying boundaries, Duerr evaluated various scenarios for the number of turbines to include in an array and their siting locations to estimate how much power an array can extract.

Duerr constructed a method for developing a cost-benefit analysis for siting turbine locations, and considered power, power density, distance from the shore, and depth at the core as the most important factors. As the first two factors increase, they reduce the overall cost, and as the second two increase, power cable and mooring installations become more expensive and complicated to install and raise the overall cost.

Using an example evaluation that assumes equal weighting of each factor, Duerr assesses potential sites. In practice, if a developer considers power or power density impacts the economic viability of a turbine array more than the distance from shore and installation depth, then higher weighting factors would be assigned to the former than the latter.

The best turbines to use are ones that have low cut-in speeds, or initial speeds needed to generate useful power, and large diameters. By including these as additional model parameters, Duerr found that arrays with large numbers of turbines are needed to extract reasonable and environmentally viable portions of the maximum available power.

The number of turbines in an array depends on their type and size. There is an optimal array size to consider. The more turbines are installed, the greater the power extracted, but can make each turbine in the array less effective due to interaction between turbines and the lower the extraction rate.

"The only way to determine what type of turbine to employ in a specific array is to compare the acquisition, operating, and maintenance costs of each," Duerr says.

Using this inexpensive, efficient method to locate potential turbine arrays is a first step toward understanding the costs and benefits of realizing ocean current energy off the coast of Florida. But, most importantly, Dhanak says, the procedure can be applied to other major currents to assess hydrokinetic power resources anywhere in the world. They're continuing to see how this scheme could be applied elsewhere.

The only way to determine what type of turbine to employ in a specific array is to compare the acquisition, operating, and maintenance costs of each.Dr. Manhar Dhanak, Department of Ocean and Mechanical Engineering, Florida Atlantic University