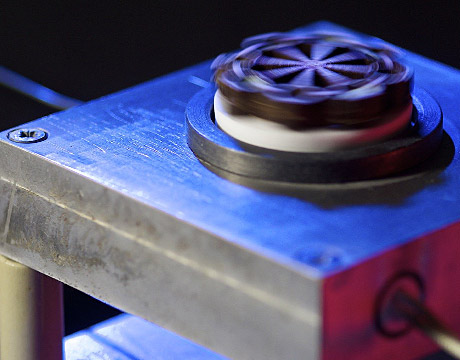 Carbon dioxide levels in the atmosphere are at the highest they’ve been in some millions of years. Wouldn’t it be lovely if we could take all the excess CO2 and somehow turn it into energy? Not likely to happen here on Earth. But researchers at Northumbria University have created a carbon dioxide engine that could very well take care of all our power needs—on Mars.

The trick to making a CO2 engine is a phenomenon called the Leidenfrost effect. You can see it in action here on earth with water (see video). Flick a few drops onto a hot skillet and they’ll bounce and skitter about, rather than spread and flow as they would at lower temperatures. The frantic behavior is due to the speed at which the drops vaporize where they make contact with the pan. That vapor keeps the droplet floating above the surface, capable of darting around free of friction.

The Northumbrian researchers had been toying with dry ice and the Leidenfrost effect for some time. Dry ice vaporizes at a much lower temperature than water, as you know if you’ve ever played with the packaging that your Omaha Steaks came in. The researchers found that they could control the direction that the ice moved across a surface by adding grooves to that surface. “At some point we realized we could wrap the linear substrate into a circle,” says Rodrigo Ledesma-Aguilar, a lecturer in the Department of Physics and Electrical Engineering at the university. “That’s when the penny dropped.”

On the ribbed circular surface, disks of dry ice levitate, and run seemingly endless, frictionless laps. “When we first saw this disk spinning, the first thing that surprised us was how fast they would spin,” says Ledesma-Aguilar. “We weren’t expecting it.” Here was the promise of power. Stick a few magnets in the ice and you’ve got a power generator. And the fact that there was no friction was spectacular. “We are very excited to look at something with no bearing at all.”

However many Omaha Steaks you might order in a year, there’s no denying that dry ice is not to be found in abundance on this planet. But astronomers now think that Mars has heaps of the stuff, some in the form of giant boulders. Of course, the boulders would not be slapped onto a turntable and instantly start running in circles. For the Leidenfrost phenomenon to kick in, the disk of ice can’t be so large that the attractive power of gravity overcomes the levitating power of the vapor. So the trick is to keep things micro. “If you go to microgravity, either by going to small scale or to place where there’s less gravity, the rotational forces go higher and higher,” says Ledesma-Aguilar.

In a sense, such an engine harvests energy from periodic changes in weather (seasons, you might call them). “If you think about it, it’s not dissimilar to hydroelectric plants on Earth,” says Ledesma-Aguilar. “They work on the water cycle: after evaporating, water rains on mountains, maybe it flows down, then creates steam with enough kinetic energy to drive a power plant. The energy you’re harvesting is the energy of a natural cycle. The idea of energy harvesting on Mars is not that far fetched.”

Of course, we wouldn’t have to go there personally to get the Leidenfrost effect pumping out juice. A well-trained Mars rover could set things up and power itself without too much difficulty. Then, with luck, there will be something for us to plug our cell phone chargers into waiting for us once we decide to colonize the place.

“We would be thrilled, of course, if at some point these ideas were taken up by NASA,” says Ledesma-Aguilar. “If these natural resources are on Mars, it is only natural that people will put it to good use.”

If you go to microgravity, either by going to small scale or to place where there’s less gravity, the rotational forces go higher and higher.Rodrigo Ledesma-Aguilar, Lecturer, Northumbria University