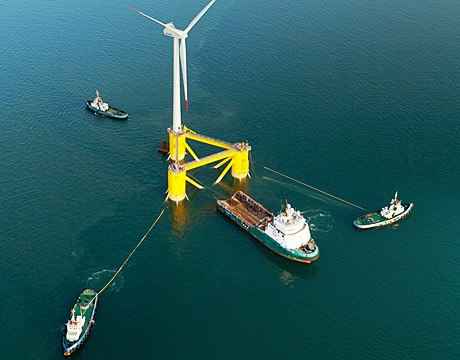 Alternative energy sources are making an impact in the U.S., and wind power is becoming a bigger player in electricity production. According to the U.S. Energy Information Administration, wind turbines accounted for 30 percent of new generating capacity over the past five years. That has come from land-based units, primarily in the interior of the country. But offshore wind turbines are poised for growth, and the industry expects them to move farther offshore, in deep water that requires floating platforms.

For now, only a handful of floating wind turbines have been installed around the world and designers have moved on developing new modeling tools to ensure their integrity and stability. “It’s a progression from known to more difficult and future concepts,” says Walter Musial, principle engineer at the U.S. Department of Energy’s National Renewable Energy Laboratory in Golden, CO. “We’re building on land-based [turbine modeling] tools. We had simulation tools to predict wind turbine performance as long as the base wasn’t moving.”

For shallow waters of 40 meters or less, wind turbines can be economically installed on a variety of firm foundations fixed to the ocean floor. Going deeper requires floating platforms loosely anchored to the seabed with chains. Oil and gas producers have built very large tension-leg platforms and other designs for drilling and processing but wind turbines present different issues. For a 6-MW machine, a platform must maintain stability while supporting a tower reaching 80 meters and topped with a nacelle and rotor weighing 350 tonnes or more.

“That all adds complexity,” says Habib Dagher, director of the University of Maine’s Advanced Structures and Composite Center and leader of DeepCwind, a commercial consortium to develop a floating wind farm off the coast of Maine. In 2013, the consortium successfully built, floated, and tested a 1:8 pilot model of a 6-MW wind turbine off of Castile, ME. “We had to couple wave loading and hydrodynamics with structural and aerodynamic forces.”

To move forward, engineers must verify and validate the work in putting together new platform designs, and those designs are not uniform. In Norway, energy giant Statoil began testing a 2.3-MW wind turbine in the North Sea, using a spar platform. A spar is a cylindrical buoy-type platform filled with ballast ad extending deep beneath the waves for stability. An advanced spar design is also being used off Fukushima, Japan, serving as the platform for a floating electrical substation in the first stages what could be a 1,000-MW wind farm.

Dagher’s group uses a three-column semisubmersible platform made of prestressed concrete with a lightweight composite tower. Seattle-based Principal Power has partnered with energy developer DeepWind to bring Principal Power’s WindFloat design to the U.S. West Coast. The WindFloat design uses three steel columns tied together with steel truss members. The turbine tower is attached to one of the columns, all of which are fitted with a large water entrapment plate at the base to provide stability. In addition, the hull’s trim optimization system uses instruments and sensors to measure ocean currents, wind direction and speed and other data, all of which are relayed to a control system that pumps ballast water among the columns to maintain stability.

NREL took its first step toward verifying and validating floating structures with its OC3 (Offshore Code Comparison Collaboration 3) project, addressing the need to verify modeling tools, using a Statoil-designed spar as a subject. That was followed by OC4, which analyzed a 5-MW wind turbine attached to a semisubmersible platform using DeepCwind’s design. Compared to the spar, the semisubmersible offered greater hydrodynamic complexity.

“It’s a progression from known to more difficult and future concepts,” says Musial. NREL now is beginning work on OC5, which Musial calls a validation phase. “We had to make sure design tools for all wind systems were verified,” he says, and there was confidence in simulation tools.

ASME, which is working to develop standards for verification and validation, considers verification as the process of determining that a computational model accurately represents the underlying mathematical model and its solution. Validation is the process of determining the degree to which a model is an accurate representation of the real world from the perspective of the intended uses of the model.

But FAST is not the only model. Dagher says his group used and modified FAST, together with four in-house and commercial modeling tools in developing their platform. They also worked with 1:50 scaled platforms and turbines in basin tests before building the 1:8 scale model. During a year of testing, the group gathered a large amount of data gathered from instruments and sensors that measured ocean currents, waves, wind direction and speed, acceleration, forces of thrust on the turbine, and other items.

Still, more work is coming as the wind industry grows. Although not specifically tied to offshore production, DOE is beginning a research initiative called Atmosphere to Electrons, or Ae2, toward more formal procedures for verification and validation procedures. One NREL engineer says researchers will likely consider more quantitative approaches in the future.