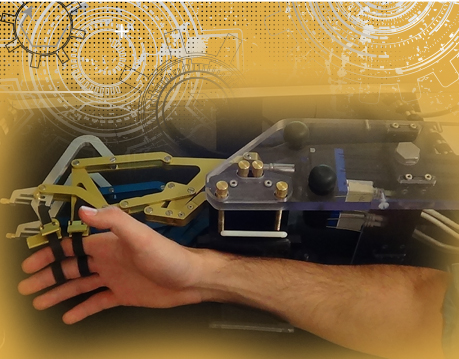 As the population ages and the incidence of stroke multiplies, engineers have increasingly been applying their skills in robotics to the medical field.

But it’s not just a matter of directly transferring knowledge from industrial robotics to robots for rehabilitation therapy because requirements can be very different. Dr. Eric Wolbrecht, assistant professor in the Department of Mechanical Engineering at the University of Idaho, is developing a finger exoskeleton for rehabilitation and neuro-muscular research. He says a lot of characteristics that are desirable for a traditional robot to weld a car in a factory may be detrimental when used in a robot designed for rehabilitation therapy.

“You don’t want a strong, stiff robot to interact with a person for safety [reasons] and because the person with the device will consciously or subconsciously let the robot take over. If they aren’t engaged, they aren’t recovering,” he says.

An industrial robot typically should be very strong with stiff springs so it doesn’t vary from its path. In contrast, a therapeutic robot dealing with a person should be gentle like a therapist who very softly takes a patient’s arm to help move and modulate the level of assistance to encourage the person. “What we are trying to do is make these soft, compliant robots,” Wolbrecht says.

“We use a linear electric actuator without any gearing. With software, we can make it compliant, acting like a soft spring. There is no gearing or friction to fight through. We also want the robots to be back drivable, so if the robot is turned off, you can push it around. If a robot in a factory is turned off, you won’t be able to push it around because it has a lot of gearing in it,” he explains.

Wolbrecht says the goal is to better understand the factors that promote functional recovery. “It’s not enough to just help move someone’s hand through a motion,” he adds. “We’re studying all different aspects of how you can optimize this process of therapy. How should the robot interact with the person during therapy? How do you prevent the robot from taking over and the person falling asleep at the wheel, so to speak, and not being engaged in the activity?”

A mechanical engineering major at Valparaiso University, Wolbrecht says he was always interested in robotics, but after earning a master’s degree in mechanical engineering at Oregon State University, he began designing jet boats for Yamaha Motor Corp. and then moved to working on skid loaders at John Deere. Wanting more engineering and less business and production, he decided to go for a Ph.D at the University of California, Irvine. There, his advisor, Dr. David Reinkensmeyer, had long been interested in how robotics and new technology can enhance rehabilitation.

As part of his Ph.D work, Wolbrecht developed an algorithm for “assist-as-needed” for an adaptive controller that continuously tries to apply less force to the patient’s arm as it follows a path on the video screen. The patient attempts tasks such as grabbing items off shelves and placing them in a cart in a shopping game in which the robot doubles as a joystick. If the patient isn’t following the right trajectory, the robot increases the force to help the patient.

“You want patients to see the effects of their efforts and push in the right direction but you still want to manipulate the output,” says Wolbrecht.

Upon graduation, he accepted his current position while continuing to collaborate with Reinkensmeyer (and others), which resulted in FINGER. After three years of building, Wolbrecht is currently completing the first official version.

While there are other rehab devices for the arm, wrist and hand, this one is unique in that it can control the motion of the fingers individually. Most others curl the whole hand as a unit, Dr. Wolbrecht says, and it has a high level of control.

He hopes to add other functionality such as measuring force and also a thumb motion capability. Ultimately, the goal is to find the best attributes for a robot that most effectively deliver and study therapy. It’s an area that requires the collaboration of experts from both engineering and medical fields, he says. “It’s very interesting and a fun place to work as fields converge,” says Wolbrecht.

You don’t want a strong, stiff robot to interact with a person for safety [reasons] and because the person with the device will … let the robot take over.Dr. Eric Wolbrecht