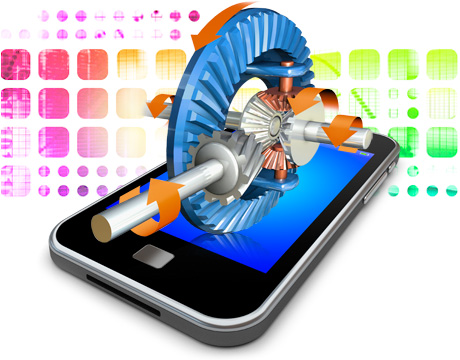 Mike Hilvers has been designing agricultural equipment for 16 years for Ohio-based Unverferth Manufacturing. When starting a project in the past, Hilvers would begin drawing on his computer in Inventor, a software package for 3D mechanical design; then with pencil, paper and calculator, he would determine the loads passing through certain links or points as a first decision point on whether or not to go forward with a design or concept.

But about a year ago, he began "playing" with a new mobile app called ForceEffect, which allows him to quickly and easily simulate design options during the concept phase of the design process. By creating a preliminary layout of linkages, he can verify a concept or design even before he creates models. Now he is a regular user because of the time it saves in eliminating the hand calculations.

It's easy-to-use, intuitive, and a nice design tool to verify a linkage or loading of a design, he says, and it "can confirm or decline a design or concept."

While there are many mobile apps useful to engineers in the areas of calculation tools, formulas, libraries, viewers, and collaboration, there is paucity when it comes to design.

When software developer Gianluca Natalini introduced FingerCAD and Finger3D in 2010, he said they were the only CAD apps on the iTunes store. These apps allow users to draw anything that can be designed on a traditional PC CAD including mechanical components with their fingers.

"These have given to the iOS device a CAD software that can be used with our fingers for the first time," says Natalini. He adds that user response has been good and that he considers his apps in a continual state of development based on user feedback.

"Free updates for enhancements are based on requests of the users," he says. "It is a very important concept for me to always give to users what they need with free updates and also for new features and enhancements."

Natalini, who has 18 years of experience in app development, works out of a home office in Latina, Italy, developing apps for the iTunes App Store and for the MAC App Store.

ForceEffect is considered an app in "pre-beta." It comes out of Autodesk Labs, San Rafael, CA, which provides the public with free, early access to prototypes, technology previews, and experimental web services, and uses direct customer feedback to improve products and advance technology solutions.

"It's a place we put software that isn't for sale yet. We test it, and if it works, great. It's basically pre-beta software. It's out there for people to work with," explains Luke Mihelcic, a simulation product marketing executive for Autodesk.

ForceEffect is available free for download for both iOS and Android devices and more recently was joined by ForceEffect Motion, which allows users to develop functional moving mechanical systems right on their mobile devices while the original app is the static version. Both apps do all the simulation and engineering calculations on a mobile device.

Mihelcic says it's an avenue that Autodesk uses to gain insight about usage, when the product is still in an early conceptual stage. "We can determine if this is something we should integrate into other software tools that we sell down the road," he said. The development of ForceEffect began about two years ago when Autodesk was looking to develop technology relevant to customers in design and identified an opportunity related to engineering calculations.

"Every engineer takes a statics class and draws free body diagrams," says Mihelcic. That takes a long time to do, is very labor intensive and if there is a mistake, it has to be started all over again. "There were no good mobile or online tools that solved this challenge," he adds, and thus ForceEffect was born.

By the end of 2012, there had been more than 450,000 downloads of the two apps. Mihelcic said the primary audience has been students, but he also has had feedback that they aren't the only ones. He said he heard from an engineering manager that if his engineers would use ForceEffect, "There could be many reiterations, designs, and prototypes that could be eliminated because we would know they wouldn't be feasible based on this."

Mihelcic says he hopes it will become a natural part of the engineering design process but exactly how the functionality might be available in the future, whether part of a library of mobile applications that will help engineers do different things, remains to be seen.

It all depends on feedback from users, he reiterates.

There could be many reiterations, designs, and prototypes that could be eliminated because we would know they wouldn’t be feasible based on this.Luke Mihelcic, Autodesk