Creating Energy with Every Step You Take

Creating Energy with Every Step You Take 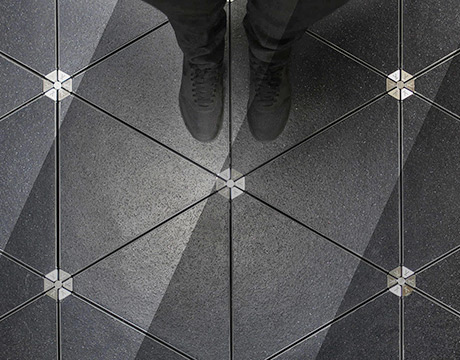 Years ago, while at Loughborough University, in Loughborough, UK, Laurence Kemball-Cook was looking for ways to generate power and energy in open spaces away from the grid. The solution he came up with revolved around the very steps we take.

“[I thought of] the energy from people’s footsteps in a busy train station and what if you used the energy from every single step?” says Kemball-Cook, now the CEO of London-based Pavegen Systems.

He built the first prototype of the energy-harvesting tile that would become the heart of his business in just 14 hours in the lab. Over the years, however, he believes he created as many as 600 prototypes to perfect the technology.

“With wood and small mechanical devices, I demonstrated what was possible, that when you stood on tile it could generate energy,” he says. “In the end, it came down to looking at a number of different ways of generating energy. Piezo wouldn’t do it because the voltage is high but the current is absolutely tiny. Even if you’re talking about a billion footsteps, piezo electricity would not be viable as an energy source. Other ways are down to electromechanical harvesters. A magnet going on a coil was a popular way and was cost effective.”

More for You: Read about the latest in Power and Energy

The first iteration of the technology was fairly basic. “We didn’t use self-enameled wire so they actually had to make a mold that would set the wire in resin and in production it had massively high costs,” says Kemball-Cook, whose bachelor’s degree was in industrial design and technology. “It just wasn’t an efficient production process.”

According to Kemball-Cook, in its present state, the pavement technology works this way: Every time you walk on the tile, the downward force of your footsteps is converted into rotational energy, which is then stored within a flywheel, which acts as a temporary storage device and filter. The flywheel, set two to three inches deep in the tile, rotates up to five seconds and every time it rotates, a series of magnets and copper coils pass over it.

“One linear meter of Pavegen in a certain environment could generate ten kilowatt hours of energy per year, per linear meter and obviously, you could scale up or scale down,” he says. “Eventually, the technology when it’s scaled up could save a municipality money. But we don’t anticipate that for some years.” The other value to the company is the data collected from a tile. “You can use the energy from people and get a footfall understanding throughout the day,” he says. “Is it busy in the morning or through the day? It can [also] help with areas like traffic management, making sure streets are cleaned appropriately based on footfall.”

Pavegen has had many clients, including Google and Cisco, and has delivered their tiles to businesses on multiple continents. Some of their tiles have even made their way to Dupont Circle in Washington,D.C.he says.

And, according to Kemball-Cook, there are even more steps to come, so stay tuned.

For Further Discussion
[I thought of] the energy from people’s footsteps in a busy train station and what if you used the energy from every single step?Laurence Kemball-Cook, CEO, Pavegen Systems, Ltd.