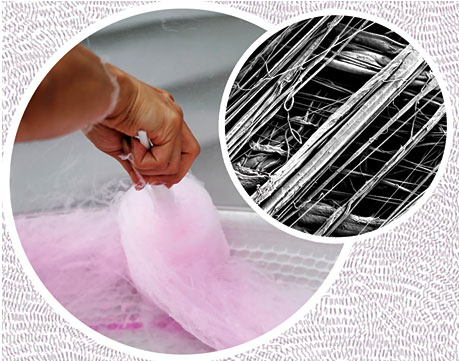 Most nanofibers are manufactured using a process called electrospinning, where a high-voltage charge of electricity blasts into a droplet of polymer liquid, resulting in the formation of long polymer strands. Although this process works fairly well, drawbacks include low production rates, the need to use high-voltage electricity, and limited control over fiber orientation, which makes it hard to produce consistent, three-dimensional structures.

Kit Parker, a mechanical engineer and biomedical engineer at Harvard University’s School of Engineering and Applied Science, wanted to find a better way to produce nanofibers for one of his fields of interest—constructing miniaturized scaffolds for tissue growth.

His review of manufacturing methods led him to rotary jet spinning—a simpler and more effective solution than electrospinning. Rotary jet spinning uses a rotating drum and nozzle—just like a cotton candy machine. Parker discovered that by feeding polymer material into a reservoir attached to a motor and then spinning it, the material is stretched out into 100-nanometer-diameter nanofibers. The fibers are extruded through the nozzle by a combination of hydrostatic and centrifugal pressure.

“This is the first step," says Parker. "Our initial testing suggests this technique is quite versatile for both research and everyday applications. Because rotary jet spinning does not require high voltage, it really makes nanofiber fabrication available to everyone."

Parker’s goal was to develop a reliable method for generating well-characterized and well-aligned polymeric fibers at the microscale and the nanoscale. He theorized these fibers could be produced using a high-speed rotating nozzle to create a polymer jet that undergoes extensive stretching, before it solidifies. The rotary jet spinning (RJS) system consisted of a reservoir with two sidewall openings that was attached to the shaft of a motor with controllable rotation speed. To facilitate fiber collection, a flexible air foil was placed on the shaft above the reservoir.

Parker’s team fed both naturally occurring and synthetic polymers (in solvents) into the reservoir at a rate that maintained a constant hydrostatic pressure and continuous flow. Some of the nanofibers produced included polylactic acid in chloroform, polyethylene oxide in water, polyacrylic acid in water at different conductivities, and gelatin in mild acetic acid.

The fibers were collected on a cylindrical collector or on cover slips that were held against the collector wall. Data showed that fiber morphology, diameter, and web porosity could be controlled by varying nozzle geometry, rotation speed, and polymer solution properties. These fibers were also used to successfully form tissue engineering scaffolds—artificial structures designed to support living tissue. In fact, heart tissue from rats was integrated with these nanofiber structures and formed beating muscle.

“The data suggest that RJS is an effective, rapid technique for nanofiber fabrication that doesn’t require electrical propulsion and is capable of fabricating 3D-aligned nanofiber structures, from a variety of polymers,” says Parker.

Compared to other methods, rotary jet spinning provides more flexibility in making nanofibers. Characteristics of the polymer nanofibers can be controlled by web porosity, hierarchical and spatial organization of fibrous scaffold, and three-dimensional assemblies—all of which expand product design possibilities.

"This is a vastly superior method for making nanofibers as compared to typical methods, with production output many times greater," says Parker. "Our technique will be highly desirable to industry because these simple machines can easily bring nanofiber production into any laboratory. This will, in effect, mainstream nanotextiles. We are already making wound dressings, heart valves, and high-performance athletic clothing. I think we’ll also be able to make the softest bed sheets and lingerie known to man."

For Further Discussion
Rotary jet spinning will be highly desirable to industry because these simple machines can easily bring nanofiber production into any laboratory.Kit Parker, Harvard University