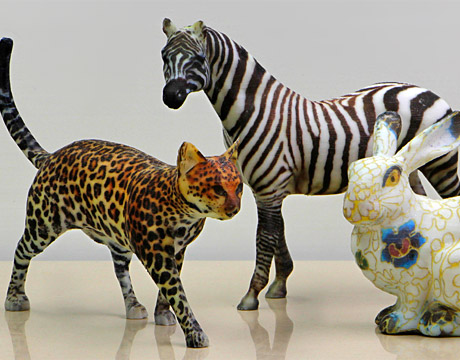 A new technique for coloring complex 3D printed objects developed by researchers at Columbia University and a Chinese university could make possible more realistic prototypes as well as more end products made by additive manufacturing.

Until now, it has been difficult to produce complicated color patterns and a variety of colors for 3D manufactured items at low cost because of limitations of hydrographic printing, or water transfer printing. The process is widely used in industry manufacturing processes for quickly coloring and applying repeatable color patterns to surfaces of objects such as iPhone cases.

As a design engineer, the challenge related to 3D printing is you are often making models and prototypes – one object – and you want the ability to customize color, says Changxi Zheng, assistant professor of computer science at Columbia and lead researcher on the project.

Although hydrographic printing can produce high-quality coloring and can be used on a wide range of materials, it cannot precisely align patterns on complex surfaces and color choices are limited. Zheng explains, “If you have a piggy bank and want to color some black dots, for eyes and nose, it’s very hard to do.” The dots for the eyes and nose could end up in a completely different spot than desired.

“There are many times when a user would like to color the surface of an object with particular color patterns, to decorate a 3D-printed mug with specific, personalized images or just to color a toy,” he says.

It just doesn’t work because hydrographic printing involves using a film featuring the desired design that is softened with chemicals in water. The film is then wrapped around the object and clings to its surface. But since it gets stretched in the immersion process, alignment on the object is not precise. “You have no control over the film, and it gets distorted,” Zheng says.

Additionally, colors are limited except with high-end printers, and even that is very expensive. With Zheng’s new method, any colors are possible as are intricate patterns, inexpensive enough to be done with 3D printers many individuals are now purchasing for themselves. “This system is easy to set up for personal use and it’s quite inexpensive, less than 40 cents per printing,” Zheng said.

Since announcing the work, Zheng says he has heard from companies interested in coloring everything from a motorcycle helmet to car accessories to Halloween masks.

He and his team developed a new computational method that simulates the stretching that occurs during immersion and predicts the distortion. Once the distortion and the desired pattern have been simulated, a colored film transfer is generated that takes into consideration the distortion and aligns exactly with the surface textures of the object.

Their work has also included developing a 3D vision system that measures the object’s orientation and dipping location. For very complex objects and designs, multiple immersions using different orientations of the object are possible and may be required.

The entire system is built upon off-the-shelf hardware and can be easily set up by ordinary users, the researchers wrote in their paper. The object is held by a mechanical gripper connected at one end of a vertical aluminum rod, driven by a linear DC motor. Underneath the rod is a container of water. The location and orientation of the object is measured. The team’s computational model predicts the stretch and distortion of the color film and creates a map between the locations on the film and the surface locations to which they are to be transferred. With that map, a color image can be printed on the film that takes into account the film distortion.

Zheng became interested when he saw a demonstration of hydrographic printing showing very complicated patterns on YouTube. He soon learned that in China, kits for hydrographic printing are available for sale to DIYers, and thought, “How can we improve this?,” he says. That led to a collaboration with researchers at Zhejiang University, one of China’s oldest and most prestigious institutions, in Hangzhou.

Zheng is very interested in the interaction between the virtual world and the real world. “This research is a good example of how virtual-world computation can work hand-in-hand with a real-world manufacturing process and significantly improve the production quality,” he says.

For Further Discussion
This system is easy to set up for personal use and it’s quite inexpensive, less than 40 cents per printing.Prof. Changxi Zheng, Columbia University