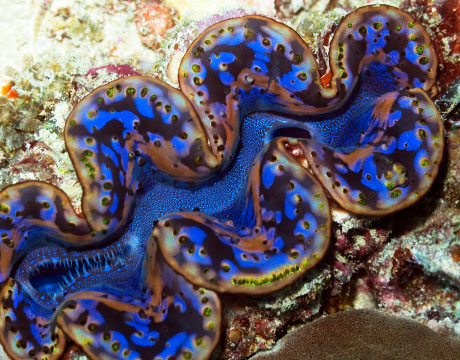 University of Pennsylvania researchers are studying how giant clams convert sunlight into energy, which could lead to more efficient production of biofuel.

Clams Give Energy to Biofuels

On the surface, biofuels sound like a great idea. But plants only store two percent of the solar energy that gets to them and will never be efficient enough to solve our energy needs.

But there’s another lifeform – the giant clam – that has figured out how to get around this problem. As researchers at the University of Pennsylvania have discovered, these massive, spectacularly colored mollusks know how to make use of most of the sunlight that hits them. The researchers recently duplicated the giant clam’s methods, paving the way for our own biofuel-driven future.

“The clam had 300 million years of evolution to sit and think about this,” says Alison Sweeney, a professor in the department of physics and astronomy at the university.

Using silica nanoparticles, the researchers have created a system of microbeads that will rest in a gelatin or hydrogel. When coupled with algae in large,inexpensively produced sheets, the synthetic clam may potentially suck more energy from sunlight than our best photovoltaic cells. And, like the clam, they would work at peak efficiency, whatever the strength of the sunlight on any given day, or at any time of day. If successful, the system may propel biofuel from being a next-to-ignored alternative energy to being a major player.

The bivalves’ ingenious solution is twofold. On the wavy surface of its flesh, the giant clam has cells, called iridocytes, which scatter light. The iridocytes are so effective that they send 90 percent of the light that hits them into the deeper flesh of the clam.

But, like all animals, the giant clam is unable to photosynthesize. To make use of all the light the iridocytes redirect within its flesh, the clams cultivate pillars of algae inside themselves.

Sweeney and her colleagues discovered that at any point along the pillars, the algae are receiving the most light of which they can make use. It’s a perfect example of symbiosis, with the clam pumping enough water to provide trace nutrients and nitrogen for itself while the algae provide the raw energy by photosynthesizing enough sunlight for themselves and the clam.

“The key thing is to couple the scattering to the pillar layout,” Sweeney says.

To create a similar system, Sweeney set out to copy the mechanics of the iridocytes. They owe their ability to scatter light to tiny structures, roughly the size of a wavelength of visible light, resting inside spherical cells just a few microns in diameter, all of which is “sitting on top of this super-duper absorbing layer,” as Sweeney puts it.

At first, replicating that system seemed like an impossible task. Those tiny structures are “parallel protein platelets” and the only known way to orient them involves using magnets, which also absorb light. So Sweeney turned to her colleague, Sanaz Vahidinia, a researcher at NASA’s Ames Research Center.

Vahidinia noticed that the iridocytes resembled dust particles in the rings of Saturn. She suggested that the exact structure of the interior of the spheres might not be so important. An empty sphere acts as a kind of lens as light waves propagate through it and around its edges.

“Basically, if we mess that up by adding structure to the center of the sphere, instead of having a little microlens, you now have a micro de-lenser as those waves sort of interfere with each other leaving the particle,” Sweeney says. After a little modeling it turned out that the best way to mimic the giant clams’ light-scattering abilities was to use spheres within spheres.

The lab should have a benchtop device that works like a clam within a year, Sweeney says.

There still are a lot of problems for Sweeney to solve before the world turns to synthetic clams for power. But if it we want our fuel to be bio, the ways of the giant clam are crucial.

“To my knowledge, the clam is the only thing that has anything useful to say about how you do better with bioenergy at photosynthesis,” she says.

For Further Discussion
The clam had 300-million years of evolution to sit and think about this.Prof. Alison Sweeney, University of Pennsylvania