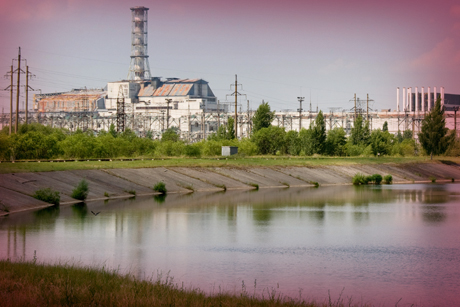 Unlike Fukushima Daiichi, whose problems were caused by a loss of all power resulting from a tsunami induced by a magnitude 9.0 earthquake, Chernobyl was a result of both design deficiencies and human factors.

The Chernobyl power-generating station is located in Pripyat, Ukraine, 110 km (68 miles) north of Kiev. There were four reactors at the plant, which began operation between 1978 and 1984. They were all RBMK-type reactors (in Russian, RBMK stands for “heterogeneous water-graphic channel type reactor”), a light, water-cooled, graphite-moderated design. Plants of this design are still in use today in Russia.

On April 26, 1986, during a system test that was conducted outside of the parameters called for, Unit 4 suffered an explosion and fire. Large quantities of radioactive contamination were released into the atmosphere, which spread over much of western Russia and Europe. Some Chernobyl radiation was detectable thousands of miles away.

A contaminated zone with a 30-kilometer (19-mile) radius around the Chernobyl plant was established. News reports at the time estimated some 350,000 people were evacuated. Nearly all re-entry remains forbidden to this day, though the Ukrainian government allows escorted tours of the area.

Cleanup efforts will go on for several more years. The New Safe Confinement (NSC) is a steel-arch structure 92.5 m high and 150 m long and with an internal span of 245 m. It will be placed over the sarcophagus that covers Unit 4, built in the months after the explosion and fire (and which is now deteriorating). The NSC is designed to contain the radioactive remains of Chernobyl Unit 4 to prevent leakage of radioactive material into the environment. Work on the NSC has experienced several delays and it is expected to be completed in 2013.

The statistics and information that follow are from the American Nuclear Society (ANS) in La Grange, Ill. and reports of the United Nations Scientific Committee on the Effects of Atomic Radiation (UNSCEAR).

The accident began with a rupture in Unit 4’s cooling-system pipes, according to ANS. The breaks let the reactor overheat and caused chemical reactions between steam and graphite. The reactor then ran out of control, triggering a hydrogen explosion and fire.

“The reactor vessel lid [weighing about 1,000 metric tons] was blown aside; a hole was blown in the roof, and pieces of core and fuel material were blown on to the roof,” ANS reported. With its core exposed to the atmosphere, “the reactor was burning down and melting down at the same time,” ANS added. “Control and containment efforts killed more than 50 people from direct radiation exposure.”

“The accident released a cloud of radioactive particles and gases,” ANS noted. “The lack of clear information and differing national standards [on acceptable radiation exposure limits] created panic in Europe.”

Nevertheless, even where radiation doses to the surrounding population were highest, in the nearby parts of Ukraine, Belarus, and the Russian Federation, the doses “were far below anything immediately harmful,” ANS said.

Chernobyl No. 4 had no steel-reinforced-concrete primary containment structure, which would have contained the explosion. The RBMK design was known to be inherently unstable at low power, ANS noted.

ANS notes that RBMKs were moderated with flammable graphite, cooled with water, and produced weapons-grade plutonium along with electricity. Such a reactor would not be licensed by the U.S. Nuclear Regulatory Commission nor by any of its western counterparts.

By all accounts, Chernobyl is still radioactive and still very dangerous. The cement containment sarcophagus, built amid deadly radiation by squads of “liquidators” in 1986, is weakening, and a collapse could turn into a second catastrophe.

Numerous reports note that cleanups are still under way on 25,000 spent-fuel assemblies, 35,000 cubic meters of low- and medium-level liquid wastes, and about 180 metric tons of now-solidified “lava like” fuel that was in Reactor No. 4 when it blew.

Cleanup work will go on for many years, much of it funded internationally. Chernobyl still has several thousand employees. To minimize radiation exposure, they work two weeks on, two weeks off, and are paid triple the normal wage. Thousands more Ukrainians guard the exclusion zone. Chernobyl no longer generates electricity (or plutonium), and the last of its four reactors was shut down in 2000.

The ANS observed that “health effects and fallout distribution have been studied continuously since the accident, as they have been for atomic bomb survivors, and others who have received large radiation doses. The latest results show that the most important effect has been psychological, while physical effects are much less severe than originally estimated.”

ANS continued, “This is to be expected, since calculations and judgments about radiation and nuclear matters always have large safety factors, to make sure any error is in the direction of safety. Ultra conservative studies project large numbers of early fatalities, but these are only after decades, if they occur at all.”

In a poetic twist, the 1,660 square miles of the Chernobyl Exclusion Zone has become one of Europe’s largest wildlife preserves. Local residents report lynx, wild boar, wolves, elk, deer, brown bears, bison, badgers, foxes, eagle-owls, and even Przewalski’s horse, a species supposedly extinct in the wild for some time. Given that the area is now heavily wooded and free of human predators, such a flourishing of wildlife should continue. Scientists, however, are studying the area's plants and animals for long-term effects of radiation.

In a poetic twist, the 1,660 square miles of the Chernobyl Exclusion Zone has now become one of Europe’s largest wildlife preserves.